The tree that time forgot 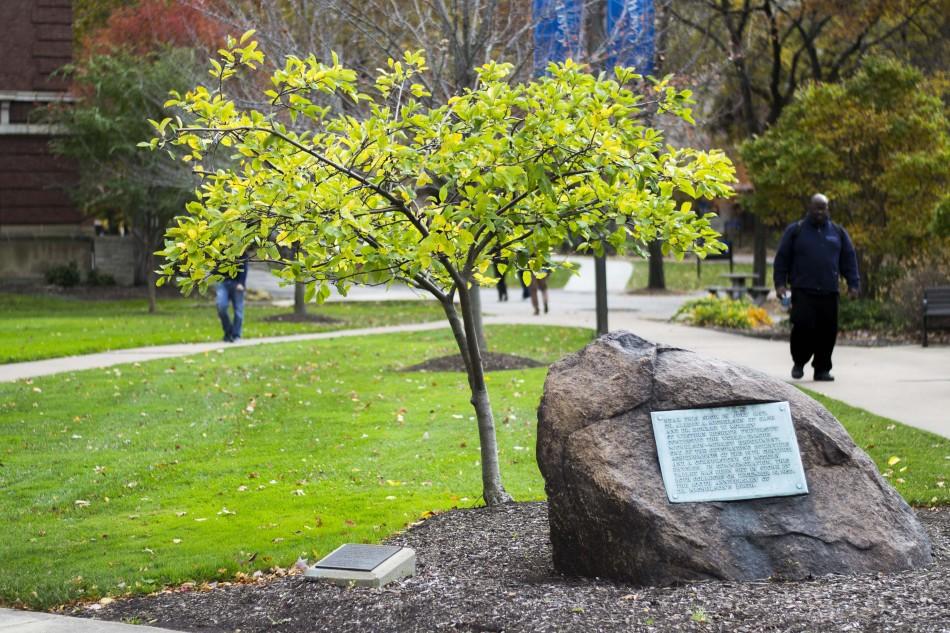 The apple tree, located in between Adelbert Hall and the Rockefeller Building, is a descendant of the tree that inspired Isaac Newton's theory of gravity.

Deep in the heart of the Main Quad, between Adelbert Hall and the Rockefeller Building, stands a small, willowy tree with bright green leaves. It’s unassuming, not nearly as impressive as some of the larger, more intimidating trees around campus. But this tree is different. This tree has a story. This tree has history.

The tree, planted in 2005, is a seventh generation descendant of the tree that inspired Isaac Newton’s theory of gravity. As legend has it, Newton was sitting under an apple tree in his mother’s orchard when he was hit on the head by a falling apple. The tree has since become famous for helping him to formulate one of the most fundamental theories of science.

Eventually, the original tree died, but before that, graft wood and cuttings were taken, eventually travelling all over the globe. One graft, planted at the National Institute of Standards and Technology (NIST), would provide the branch that was eventually brought to CWRU.

Arden Bement, former director of the National Science Foundation, donated the tree to CWRU. He had previously served as a part-time faculty member at the university. He received the graft as a parting gift when he left his position as the Director at NIST in 2004 to take the job at NSF.

Bement approached his friend, Arthur Heuer, Director of the Swagelok Center for Surface Analysis of Materials, at an Oct. 2005 meeting of the National Academy of Engineering, telling him that he wanted to plant the graft at CWRU. Heuer wasn’t entirely sure why Bement chose CWRU, but he was happy to accept the gift. The tree became the only “Newton tree” descendant in Ohio. At the time of planting, there were approximately three-dozen descendants of the tree in America.

The tree was planted in the fall, but it wasn’t dedicated until April 28, 2006. At the dedication, where John Anderson, CWRU’s provost and university vice president at the time, and Bement spoke, attendees were served Fig Newtons and apple cider.

“This is no ordinary tree,” Anderson told The Daily when the tree was dedicated. “As the Newton tree grows, it is our hope that it provides a point of interest for science at Case and a landmark for students and visitors alike who will seek out the tree as a must-see.”

Unfortunately, though, that has not been the case. Since the tree was planted, it has slowly faded into oblivion.

“I have no idea why its receded into memory,” said Heuer. “This was the first time I believe I’ve been asked about it since many years ago.”

Heuer is one of the few on campus who is even aware of the tree’s existence. Despite the fact that the tree is listed under the traditions tab on the Office of Student Activities and Leadership’s website, no one from that office had known about the tree. Even several CWRU tour guides, who are trained in campus landmarks, said that they were unaware of the tree, and that it wasn’t a stop on their tours.