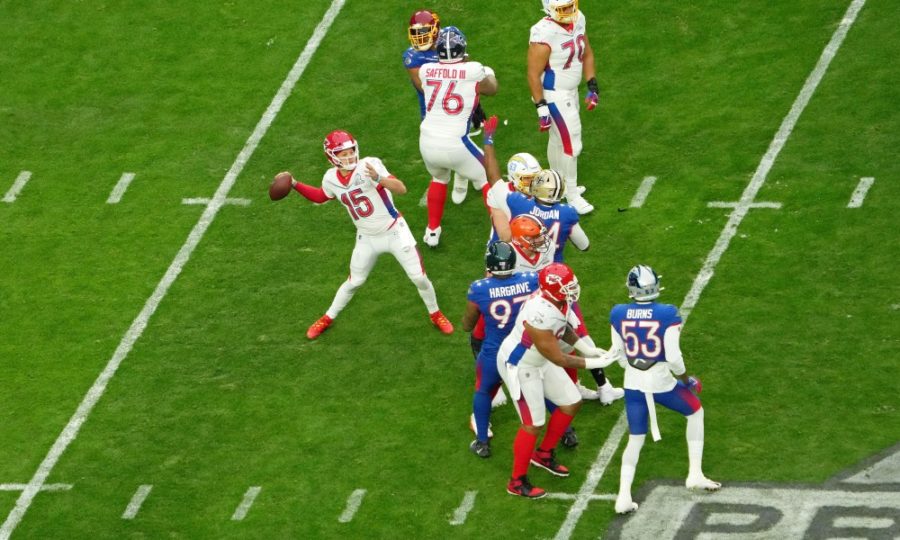 NFL players come together to compete in the 2022 Pro Bowl—but was it worth the watch?

This year’s Pro Bowl, like every other Pro Bowl, was quite mediocre. Despite having the league’s brightest stars playing,  minimal interest or passion could be found. For the NFL, holding this year’s Pro Bowl in Las Vegas was the “saving grace” of an otherwise unexciting affair, according to Sam Gordon of the Las Vegas Review-Journal. If the NFL continues to host these annual games players don’t take seriously, then there is no reason that the Pro Bowl should continue to be played. Having the best players across the NFL play each other, divided between their two conferences, the National Football Conference (NFC) and the American Football Conference (AFC), should make for one of the most exciting games of football in the season. Unfortunately this is not the case. There must be other ways for the NFL to properly honor and recognize the talents of the season’s best players while simultaneously making an impact on the community and raising money for charity.

As a part of the entire Pro Bowl week and celebrations, the NFL also hosts other events such as the fun skills competition that, while almost laughable, is also more oriented towards television viewers. Some of these events are made to generate more general interest for American football for casual fans. Over the years, the Pro Bowl quality has deteriorated, due in part to the fact that the players do not wish to run the risk of getting injured in such a low-stakes game that does not count towards any team records. As such, there is no reason for the fans to pay so much money to see them in person or invest three hours of their lives into such an effortless game.

There’s not much to talk about when it comes to the actual gameplay of the Pro Bowl. There were a lot of interceptions in the first half of the game, with both teams scoring a relatively high number of points. The AFC team took the lead in the first half and hung on until the end. As far as awards go, Los Angeles Chargers quarterback Justin Herbert was named the offensive MVP, while the Las Vegas Raiders’ pass rusher Maxx Crosby won the defensive MVP award.

It becomes evident that the Pro Bowl isn’t very important or memorable when there isn’t much to say about the entire game. The NFL keeps trying to advertise the game like it is on par with the Super Bowl, when in reality it is the most irrelevant football weekend of the year. Even former NFL legend Deion Sanders was incredibly dissatisfied on Twitter with the competitiveness of the Pro Bowl. He referred to his own playing days when the athletes used the game to prove that they were truly worthy of the distinction and the title of being a Pro Bowler.

The best solution for the NFL is to either greatly incentivize the Pro Bowl game, be it with extra money for charity or an extra bonus to get the players antsy to be competitive on the field. Or maybe they should scrap the entire concept of the Pro Bowl and come up with better ideas to display the league’s talent while increasing philanthropic efforts. Looking from a viewership standpoint, the NFL Pro Bowl peaked in 2011 with 13.4 million viewers, only to drop 6 years later in 2017 to a mere 7.4 million viewers. The incentives for the winners currently sit at an extra $80,000, but with large-multi million-dollar contracts for most players, the prize money wouldn’t mean much. Therefore, increasing the incentive to an attractive number could make players more competitive.

The NFL is only getting more and more popular as new, young stars make it to the league, but the Pro Bowl is holding the NFL back from keeping each weekend of the season more interesting than the last.