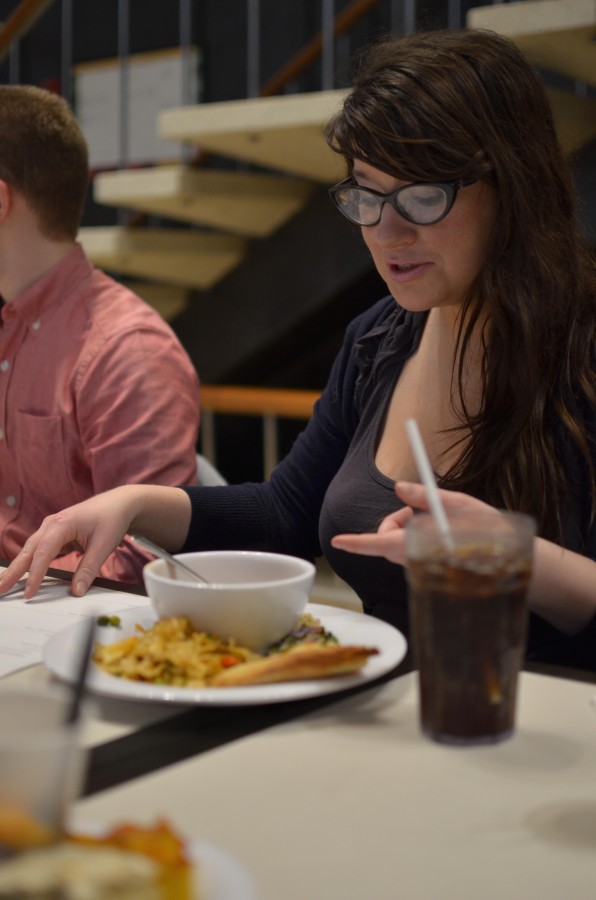 I’m a contributing dining editor at Cleveland Scene Magazine. I regularly profile emerging shops and restaurants, interview established and rising star chefs and report on food trends. If it sounds like a dream job, it’s because it is. In the past, I’ve written about local food businesses for various Cleveland publications.

I had never tried CWRU’s dining hall food, but I did live in the dorms of my own college during my freshman and sophomore year.

Fribley Food Item: Buttercream white cake
I’m a dessert fanatic, so truthfully I worked a bit backward. And here’s where Fribley had the edge on the night I visited. This cake square looks plain in presentation but was actually dense and moist with a frosting that was rich but not too sweet.
Rating: 4.5/5

Fribley Food Item: Vegetable barley soup
Sometimes simplicity is key. Truthfully, the first thing I noticed was the miniature packs of Goldfish, which added a little trendy kitsch similar to something Melt might offer with my grilled cheese and tomato soup. The tomato base wasn’t much of a departure from the bargain bin bulk cans I stocked up on during my own days of dorm dwelling, but the onions were a nice touch.
Rating: 3/5

Fribley Food Item: Margherita pizza
I admit that I expected to encounter some run-of-the-mill deep dish pie with cardboard consistency and cheese that was overly caked on from basking under a heat lamp all day. Fribley’s was surprisingly fresh and the crust was thin and crispy. It could have used a little more sauce, but it worked well with the light broccoli, spinach and red onions that were a welcome substitute to your average grease-soaked pepperoni.
Rating: 3/5

Fribley Food Item: Southwestern bake
Salty, stiff and lacking much spice, this casserole-style dish was a little disappointing but still an alternative to the basic burgers and fries. My advice if you’re looking for something a bit more adventurous: Fribley was stocked with edamame and bamboo shoot salad and a made-to-order, dietary sensitive stir fry bar.
Rating: 2/5

Leutner Food Item: Build-Your-Own quesadilla bar
In the realm of fast casual in 2015, the Chipotle model reigns supreme. These are made to order behind glass before you’re on your own to fill with toppings to your liking. I stacked mine with rice, black beans, corn and the criminally-overlooked salsa verde.
Rating: 3.5/5

Leutner Food Item: Vegetarian chili
Veggie chili is always the underdog, but a good bowl can convert naysayers within spoonfuls. This lacked a little kick—to be expected when you have to please the masses—but overall it was a nice take on the traditional. Unless you have a crock pot and stove top in your dorm, this was one meal that just can’t be made while living on campus. While most other dining hall dishes can be found in one of University Circle’s vast surrounding culinary options, there are little to no outlets to satisfy a craving for stellar veggie chili.
Rating: 3.5/5

Leutner Food Item: Whole wheat pasta
The first thing that surprised me was all the choices. The second was the heaping servings. I ultimately settled on whole wheat pasta with alfredo, red peppers and onions. The sauce was a little runny but not too thick. It could have been the most watered-down white sauce around, and the fair-weathered hospitality of the cook on the line would have made up for it.
Rating: 4/5

Leutner Food Item: Stir fry
Leutner’s stir fry station is the hall’s centerpiece with soups, salads, breads and other small apps surrounding the station. The Kung Pao flavor fell a little flat, but I was impressed with the availability of water chestnuts, one of my favorites. Bamboo shoots again made a welcome appearance and celery added a bit of crunch.
Rating: 3/5

If CWRU is attempting to keep pace with the popular build-it-yourself, customizable model, Leutner has an obvious edge. It’s sleek, the palate is more expansive and the made-to-order modus operandi requires a level of freshness by design. But for those who want stripped down, simple, back to the basics, Fribley will do just fine.