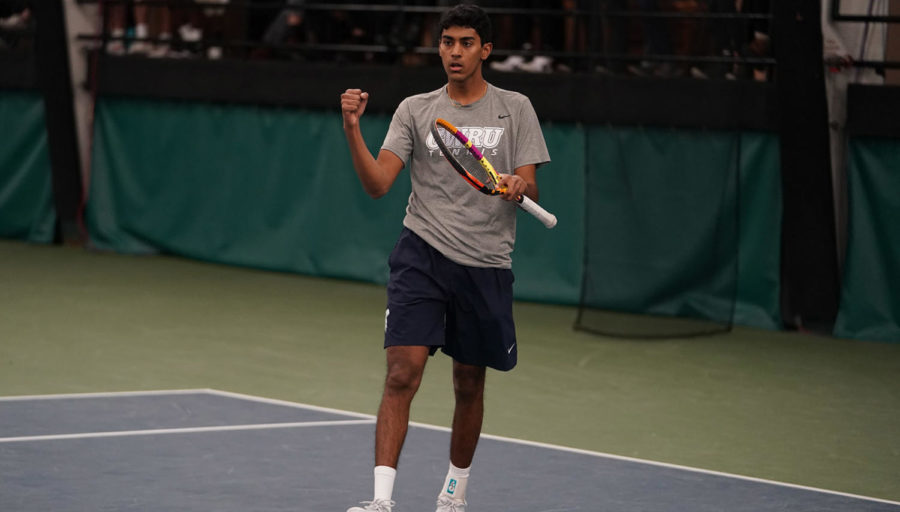 The doubles victories of second-year Sahil Dayal (above) helped the Spartans remain ranked No. 1 as the team continues to compete at a top level.

CWRU started the day indoors at the Mayfield Village Racquet Club against Wittenberg University. The doubles teams of graduate student Jonathan Powell/third-year James Hopper, third-year Chris Provenzano/second-year Sahil Dayal and graduate student Anthony Kanam/fourth-year Chaitanya Aduru posted dominant victories of 8-2, 8-2 and 8-0 respectively. This strong start continued into singles, where second-year Vishwa Aduru led the way with a swift 6-1, 6-0 victory over his opponent. Third-year Michael Sutanto followed suit with a 6-2, 6-2 victory of his own, while first-year Ajay Mahenthiran topped his opponent 6-2, 6-0. First-year Casey Hishinuma, second-year Daniel French and first-year Pranav Ikkurthy each won their own matches, bringing the total tally up to 9-0 for the Spartans.

The Spartans then traveled to Oberlin, Ohio where they faced Oberlin College. CWRU’s doubles play was near perfection again with Sutanto/Hopper topping their opponents 8-3, Dayal/French pulling away with a close 8-7 win and Provenzano/first-year Ansh Shah almost sweeping their opponents 8-1. Sutnato bested his opponent 6-0, 7-5 to kickoff singles play. Mahenthiran continued with a 6-3, 6-4 victory. Hishinuma and third-year Diego Maza both earned 6-1, 6-1 victories over their respective opponents. First-year Ben Martin and fourth-year Max Vicario finished the match off with their own crushing victories.

The Spartans concluded their day against Ohio Wesleyan University. This time Shah/Dayal led the way in first doubles with a convincing 8-3 victory. The double teams of Vishwa Aduru/Ikkurthy along with third-year John Kasner/Maza bested their opponents 8-4 and 8-1, respectively. The dominant victories continued on in singles with Kanam defeating his opponent 6-4, 6-2 while Ikkurthy topping his opponent 6-0, 6-1. Martin, Provenzano, second-year Yuvraj Narang and Dayal maintained this level of excellence with strong victories of their own.

The men’s tennis team is 13-0 against DIII opponents this season with an overall record of 15-2 so far.

“Obviously it’s an amazing feeling and [I] couldn’t be happier to be on this team,” said first-year Casey Hishinuma about the current win streak, “but I believe that the alumni deserves as much credit as the current team… [Because] of the culture that they have built over long years, we are able to train and compete at a such high level everyday, and as a [first-year] I am very grateful for them.

When asked about maintaining the team’s consistency, Hishinuma added, “[This] winning streak most definitely isn’t what we focus on or care about. We are not quite done with our spring season, with the UAA and NCAA championship coming up … so we’re solely focused on continuing to train with the right culture everyday and competing against anyone with lots of energy.”

The Spartans will be back in action from April 2-3 when they will face stiffer competition against No. 13 North Carolina Wesleyan College in Gambier, Ohio and No. 21 Kenyon College on Sunday, April 3rd.