No. 1 ranked men’s tennis team continues its strong performance on the road 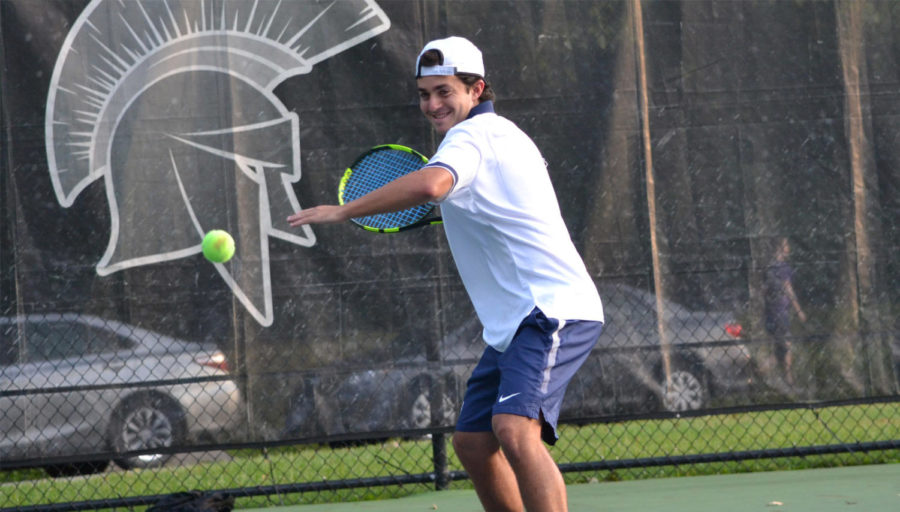 Over spring break, men's tennis became the first CWRU athletic team to be ranked No. 1 nationally.

While most students were relaxing during a much-needed spring break, the Case Western Reserve University men’s tennis team traveled to Orlando, Fla. to compete in six matches in a span of just four days. The 2022 Intercollegiate Tennis Association (ITA) national indoor champions went into the trip boasting three nationally ranked players and a 7-1 record. Third-year James Hopper, first-year Ansh Shah and second-year Vishwa Aduru are currently ranked No. 6, No. 10 and No. 32 respectively in singles. With two matches unable to be played due to rain, CWRU went 5-1 last week to improve to a 12-2 overall record.

The Spartans started the week off strong with a convincing 9-0 victory over Hampden-Sydney College last Tuesday. The doubles teams of Anthony Kanam and Chris Provenzano, Diego Maza and Max Vicario and Daniel French and Yuvraj Narang gave CWRU an early 3-0 lead with their swift victories.

First-year Ajay Mahenthiran led the way in first singles with a 6-2, 6-0 victory followed by first-year Casey Hishinuma with a 6-2, 6-1 victory. Kanam, Provenzano, Maza and Vicario continued with decisive victories of their own in singles to conclude the Spartans’ sweep.

The team’s next two scheduled matches—which were supposed to be on Tuesday against Wesleyan University and on Wednesday against Rensselaer Polytechnic Institute—could not be played due to extreme weather conditions.

Even with stiffer competition, the team’s success continued with another sweeping 9-0 victory against No. 14 Carnegie Mellon University on Thursday. This time, the doubles teams of Hopper and Jonathan Powell, Vishwa Aduru and Sahil Dayal and Chaitanya Aduru and Michael Sutanto paved the way for CWRU’s early 3-0 advantage. Hopper, Vishwa Aduru, Sutanto, Powell, Mahenthiran and Shah all also had quick victories in singles to complete the sweep.

Unfortunately, the Spartans did not fare well in their second match of the day against No. 21 Division II Wayne State University. Of the six single matches, only Powell and Vicario came away with victories. Maza and Kanam were the lone doubles team to secure points as Wayne State defeated CWRU 5-2.

Despite this loss, the Spartans rallied to defeat DI Sacred Heart University for their third consecutive match of the day. CWRU started off by securing two out of the three doubles points. Hopper and French prevailed 6-4 at second doubles, while Shah and Provenzano won 7-6 at third doubles. In singles, Vishwa Aduru, Shah and Kanam secured victories to clinch a CWRU victory of 4-2.

CWRU finished their spring trip last Friday with crushing victories over No. 40 Haverford College and No. 23 Southwestern University. Against Haverford, the Spartans swept doubles with an 8-0 victory from Hopper and Powell, an 8-1 win from Vishwa Aduru and Dayal and an 8-5 victory from Chaitanya Aduru and Sutanto. In singles, Hishinuma started off with a 6-0, 6-2 victory followed by Sutanto with a 6-0, 6-3 victory. Maza, Shah, Vicario and Kanam each had dominant victories of their own as well.

At the end of the trip, it was announced that the CWRU men’s tennis team was ranked No. 1 in the latest ITA DIII Men’s National Team Rankings. It was the first time in CWRU athletics history that a team reached the top rank.

“It feels great, but we know it’s only halfway through the season,” said Shah on the ranking and the approach for the remaining season. “We have to keep preparing for the new challenges that lie ahead for our upcoming competitions. I think our mindset has always been to not look too far ahead, so if we stick to our process and only focus on what we can control, the results will follow.”

Vishwa Aduru added, “I think it’s a great milestone for [CWRU and CWRU athletics], but we still have a long way to go to be where we want to be at the end of the season. It hasn’t affected our preparation much, since we know that every team we play will be playing their best tennis and want to beat us. We are just taking it one day at a time, doing whatever we can at practice to get better. We hope to continue this success for the rest of the season, and we are preparing for whatever is going to come our way.”