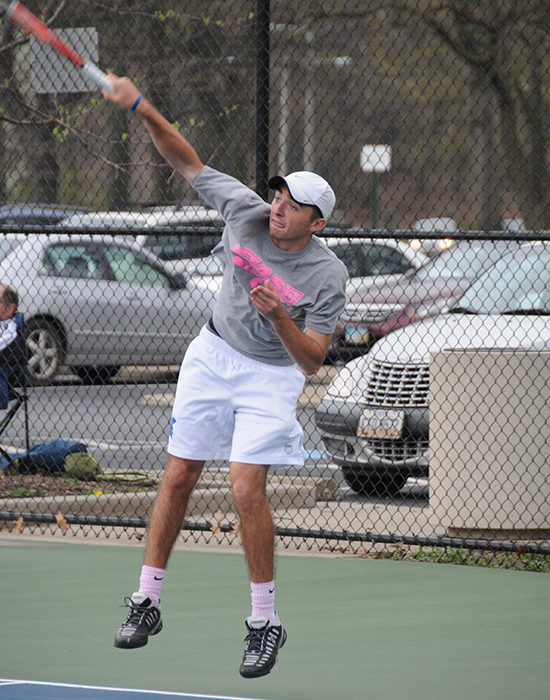 The Case Western Reserve University men’s tennis team ended their spring break campaign even with a 4-4 record. The No. 12 Spartans opened their Spring Break trip with a win before dropping three in a row. The men closed out strong with a fifth place finish in the stacked Stag-Hen Invitational.

Case finished the week with a 15-4 overall record.

The week for the Spartans was capped off at the Stag-Hen Invitational, which was co-hosted by Pomona-Pitzer College and Claremont-Mudd-Scripps Colleges. The eight-team field was packed with teams that were all ranked in the Intercollegiate Tennis Association Top 30.

The Spartans opened the tournament with a loss, swept by the hosts Claremont-Mudd-Scripps, 9-0. The men bounced back and toppled No. 25 Skidmore College 5-4 to move into the fifth place match. The Spartans were able to finish out strong as they dismantled No. 27 Swarthmore College with an 8-1 win.

The men opened their trip with a 6-3 win over No. 26 Whitter College. The Spartans then met their match with a pair of losses to two of the top teams in the nation. Case lost to No.7 Trinity College of Texas 7-2 and then fell again 7-2 to No. 11 University of Redlands. The losses snapped a 13-match winning streak and were the team’s first two defeats of the season.

The Spartans nearly upset No. 5 Bowdoin, but came up a point short 5-4. Case snapped their three game losing streak with a shutout over Chapman University. The Spartans bounced back with a 9-0 win over the 14th-ranked team in the ITA’s West Region.

The Spartans have been exceptional in doubles so far, winning 70.2% of their sets this season. The No. 1 doubles team struggled on the week, going on 2-6. The No. 2 and 3 duos were exceptional over the trip, going 6-2 and 5-3, respectively.

Kyle Gerber and Christopher Krimbill combined for six of the teams matches at the No. 2 spot. The duo went 5-1 on the week together, only falling to No. 7 Trinity’s Nicholas Moreno and Charlie Curtis.

Alex Solove teamed up with Richard Brunsting and Nicolas Howe for matches four and three, respectively. He was in the No. 3 doubles spot and rounded out the final match of the week with Gerber. Solove went 1-3 with Brunsting in a quartet of matches that were never more than three games apart. Solove then went undefeated with Howe in three matches and won his only match with Gerber.

The men haven’t competed since and will take another week off before they travel to Allegheny College on Saturday, Mar. 30, to play at noon. The men will host their first matches of the semester in two-and-a-half weeks when Wittenberg University and Oberlin College come to town on Wednesday, Apr. 10. The Spartans will play Wittenberg at 2:00 p.m. and Oberlin at 5:00 p.m.