No. 13 Spartans fall short in upset bid of No. 2 Lords 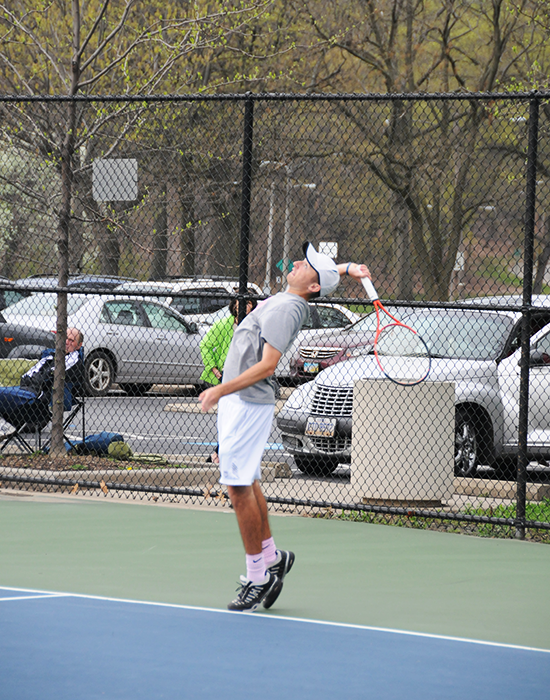 Playing a dual match for the first time in three weeks, the No. 13 nationally-ranked Case Western Reserve University men’s tennis team fell by a narrow 6-3 tally at No. 2 Kenyon College Saturday afternoon at the Jasper Tennis Center.

In a battle of the Intercollegiate Tennis Association Central Region’s top-two teams, the Spartans fall to 15-5 overall, while the Lords improve to 12-3.

Case raced out to a 2-1 lead in doubles competition with wins at the first and second positions. Junior John Healey and senior Nicolas Howe teamed up for an 8-4 win at No. 1 versus Michael Razumovsky and Sam Geier. At No. 2, senior Kyle Gerber, and freshman Christopher Krimbill were victorious by an 8-1 tally.

In the third slot, the duo of seniors, Richard Brunsting and Alex Solove, battled back and forth with the Lord tandem of Kevin Ye and Wade Heerboth. However, the Kenyon duo was victorious in the tiebreaker by a 9-7 count and to get the hosts on the scoreboard.
In singles action, the Lords took a 4-2 lead with victories in the No. 4, No. 2, and No. 3 slots. Not done yet, junior Eric Klawitter cut the Kenyon advantage to 4-3 in the No. 5 spot with a 4-6, 6-2, 6-3 victory versus Tim Rosensteel.

However, the Lords claimed the final two points at the top and the bottom of the lineup for the 6-3 victory. Burgin toped Krimbill 6-3, 3-6, 6-3 while Jacob Huber held on to defeat Harrison Smith 7-6, 6-3.

The latest ITA rankings are due out on Thursday, April 11, too late for this edition of The Observer. The most recent rankings from March 28 have the Spartans ranked second in the Central Region, behind just Kenyon and ahead of UAA rivals No. 3 Washington University and No. 6 University of Chicago. Washington is fourteenth nationally while Chicago just squeaked into the rankings at No. 30.

The Spartans have a pair of players ranked in the central as Krimbill and Drougas are ranked No. 13 and 15, respectively. Washington’s Adam Putterman is the top ranked player in the central region and Chicago’s Deepak Sabada is No.5. The only other member of the UAA in the top 25 is Chicago’s Ankur Bhargava who is No. 23.

The Spartans’ planned home opener on April 10 was canceled due to inclement weather. The team will travel to Allegheny College Friday, April 12, in their final road match.

Case will host their only home match of the season on Saturday, April 20, when they host Walsh College on Seniors’ Day and the team’s Rally for the Cure match.

The Spartans will then close out the season from April 26 to 28 when they travel to Altamonte Springs, Fla. where the University of Chicago will play host to the 2013 UAA Championship.