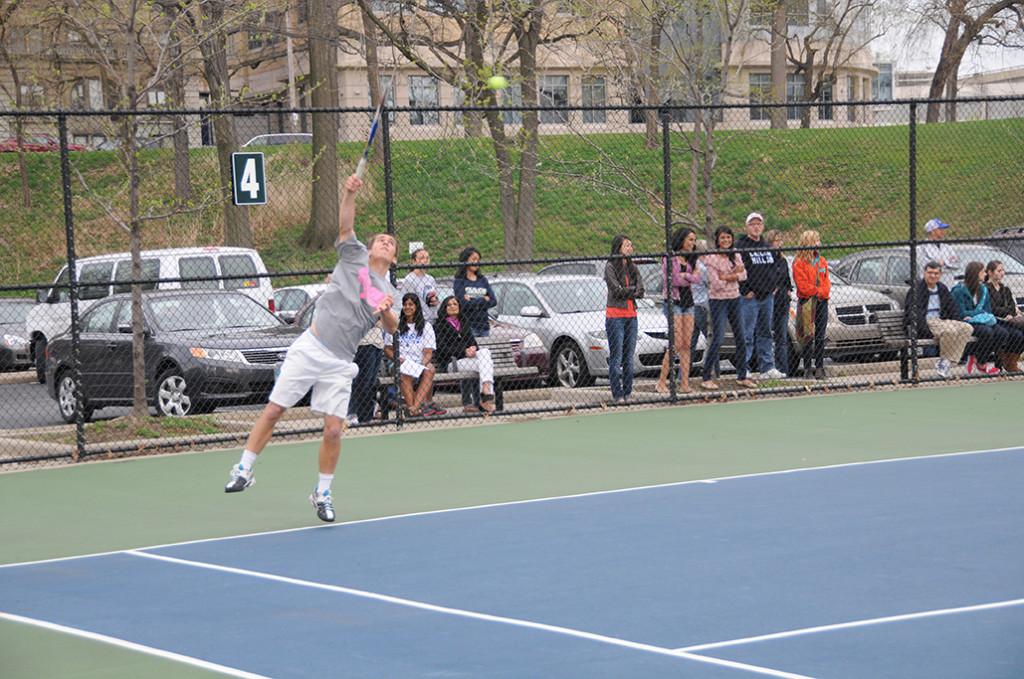 The No. 17 nationally-ranked Case Western Reserve University men’s tennis team picked up a 9-0 dual match win on Sunday versus Vassar College during the final day of the Mary Washington Invitational. The Spartans completed a perfect weekend after Saturday victories versus No. 12 North Carolina Wesleyan College and No. 21 Mary Washington. The Spartans bested North Carolina Wesleyan by a 6-3 tally before defeating the host Eagles, 7-2, during the first day of the two-day Mary Washington Invitational.
With Sunday’s victory, the Spartans, also ranked No. 3 in the competitive Intercollegiate Tennis Association Central Region, improve to 3-0 for the young season. With the loss, the Brewers fall to 3-4.

Versus North Carolina Wesleyan, the Spartans notched two of three doubles points. The Battling Bishops took a 9-7 decision at No. 1, but Case responded as the duo of seniors Richard Brunsting and Alex Solove defeated Johan Ljungdahl and Peter Hviid by an 8-5 tally at No. 2. At No. 3, the team of freshman Christopher Krimbill and junior Eric Klawitter gave Case the lead headed into singles with an 8-6 win versus Marcus Pola and Mikhail Konnov.

The Battling Bishops picked up the first two points in singles and grabbed a quick 3-2 team lead as No. 2 nationally-ranked Robert Kjellberg defeated sophomore Will Drougas by identical 6-1, 6-1 scores and Artisom Prostak beat Krimbill in the second singles slot.

However, Case regained the momentum and took the match with four-straight wins at No. 3 through No. 6. Klawitter and Ljungdahl traded the first two sets with 6-4 scores at No. 3, but the third-year Spartan grabbed the team point via a 6-3 score in the deciding set. At No. 4, junior Derek Reinbold defeated Konnov 6-4, 6-2, and at fifth singles, freshman Harrison Smith grabbed his first collegiate victory versus Pola 6-0, 6-2. Junior John Healey was victorious at sixth singles, 6-3, 6-2 versus Irakii Marutian.

In the afternoon matchup against the nationally-ranked Eagles, the duo of Healey and senior Nicolas Howe began doubles with a 9-8 victory versus the tandem of Donato Rizzolo and Evan Charles. Mary Washington picked up a point at No. 2, but the tandem of Klawitter and Krimbill gave the Spartans a 2-1 team advantage with an 8-6 victory at No. 3.

Singles play began with Drougas cruising to a straight-set victory versus Alex Blakhin by a 6-2, 6-1 tally at No. 1 and Krimbill with a 7-6, 6-2 score at No. 2. In the third slot, the Eagles pulled to within two, 4-2, when Charles defeated Klawitter in a match between regionally-ranked opponents, 6-4, 6-4.

Case picked up all six singles points and dropped just one set. Drougas started things off at first singles with a victory versus Andrew Guzick by a score of 5-7, 6-2, 6-3. At No. 2 singles, freshman Christopher Krimbill blanked Dan Freeman in straight sets, 6-0, 6-0.

The Spartans also picked up all three doubles points. Healey and Howe took an 8-2 decision versus Guzick and Freeman. Solove and Brunsting also scored a win at second doubles, 8-3 versus Jasso and Kessler, while Krimbill and Klawitter rounded out the win with an 8-3 decision versus Phelps and Udine.

The Spartans are back in action on Friday through Sunday, Feb. 22-24, at the ultra-competitive DePauw University Invitational in Greencastle, Indiana. Case will battle a trio of nationally-ranked foes in No. 28 DePauw on Friday at 5:30 p.m., No. 29 University of Wisconsin-Whitewater on Saturday at 2:00 p.m., and University Athletic Association No. 4 Washington University-St. Louis on Sunday at 9:00 a.m.