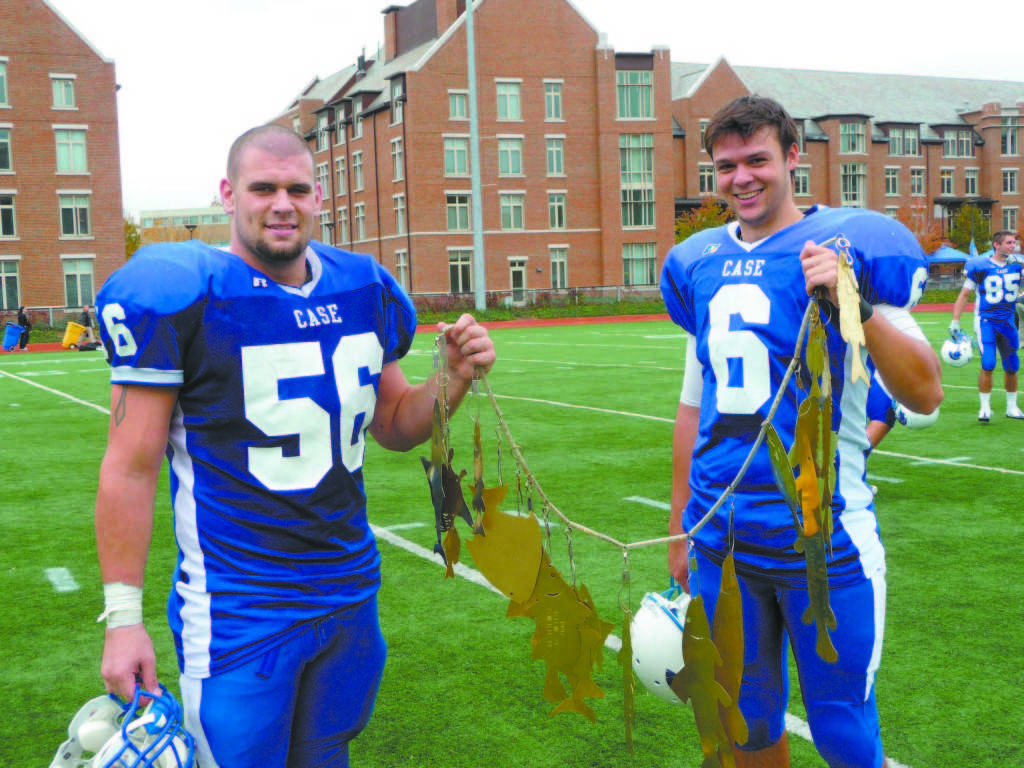 The Case Western Reserve University Spartans and the College of Wooster Fighting Scots met for the twenty-third time last weekend, as the two teams battled for the Baird Brothers Trophy. The No. 23 Spartans continued its four-game win streak against the Scots, winning 28-14 and increasing their regular season win streak to 38 games.

CWRU wide receiver Zach Homyk continued his All-American campaign as he grabbed nine receptions and two touchdowns, his eighth and ninth of the season. Senior quarterback Joey Baum completed 22-of-32 passes for nearly 200 yards and had a hand in all four Spartan touchdowns on the day.

Senior wide receiver Homyk stated after the game, “It was a great victory overall, but there is a lot we need to improve on…it was good to see the offense have answers to Wooster’s plays, but we still made mistakes on both sides of the ball that we won’t be able to get away with against UAA teams.”

The win also propelled the Spartans into the American Football Coaches Association national rankings at No. 23. The Spartans continued to sit on the doorstep of d3football.com’s national rankings, falling three spots and thirteen votes short of the Top 25.

The Baird Brothers Trophy is awarded to the winner of the annual football game between CWRU and College of Wooster. The idea of the trophy was originated by the Baird brothers, Bob and Bill, who were economic professors at CWRU and Wooster. The winning school receives the trophy, a distinctive chain of brass fish – yes fish – representing each game played in the rivalry. The team not only gets to keep the trophy, but gets to add a new fish to the chain to represent that year’s game.

In 1996, Sports Illustrated recognized the Baird Brothers trophy as one of the most distinctive in college football, “The Baird brothers originated the trophy in 1984 when Wooster and Case first met as members of the North Coast Athletic Conference. The brothers, economic professors at the rival schools, were taught by their father to fish at an early and thought the fish theme would be a fitting reward to the victors. Bob Baird passed away a few years ago, but his brother Bill still carries on the tradition of presenting the trophy to the winning team at the conclusion of the game.”

Wooster leads the all-time series with 13 wins while CWRU now has 10. The Spartans have won four straight games against the Fighting Scots. Wooster knows plenty about having a good winning streak, having reeled off 10 straight victories from 1995-2006.

The Spartans strike first when Baum found Homyk for a one-yard pass to the end zone. Senior kicker, Sam Coffey, completed the point after to make the score 7-0 at the 6:32 mark of the first quarter. The CWRU defense kept Wooster at bay, preventing any scoring possibility, ending the first quarter with the Spartan on top, leading 7-0. The Spartans double their lead in the second quarter when quarterback Baum once again hooked up with his star receiver Homyk at the 11:17 mark. The key play of the scoring drive came on fourth down when junior punter Daniel Vasil snapped the ball on fourth down and ran with it, picking up 28 yards and a first down.

Wooster scored their first touchdown with just over seven minutes remaining in the first half. Quarterback Richard Barnes scrambled before finding freshman wide receiver Joe Stoffer open at the corner of the endzone for a six-yard touchdown pass that capped off a 10-play, 60-yard drive. Barnes led that drive by completing 6-of-8 passes for 39 yards and Stoffer’s touchdown reception was the first in his career.

The Scots defense was able to force a three-and-out, but the Spartans would strike again. CWRU answered with a quick five-play, 41-yard drive that ended with quarterback Baum’s 24-yard touchdown pass to senior wide out Shaun Nicely. Coffey’s PAT made the score 21-7 with three minutes left in the first half.

Wooster took the final drive of the first half deep into the Spartan territory, but was stopped when senior safety Zach Hass intercepted his third pass of the season in the end zone with 29 seconds left on the clock. The Spartans headed into the locker room with a solid 21-7 lead.

The Fighting Scots inched closer with 7:11 left in the third quarter when quarterback Barnes ran an option into end zone from two yards out to cap an 18-play, 64-yard drive that included a fourth-and-eight conversation at the Spartans 26-yard line. The PAT by kicker Russ Palm got the Scots within one touchdown as the score narrowed to 21-14.

Spartans capitalized again in the fourth quarter when quarterback Baum doubled up with Nicely for a five-yard touchdown. The touchdown capped a 17-play, 99-yard drive that took 7:18 off the clock and was kept alive by a roughing the punter penalty on the sixth play of the possession. The Spartan defense held the rest of game as the two-possession lead was too much for the Fighting Scots to surmount.

For Wooster, quarterback Barnes completed 24-of-35 passes for 159 yards and a score in addition to rushing for 35 yards and recorded a touchdown. Linebacker Eric Keyes paced the defense with a game-high 17 tackles and a forced fumble.

Senior running back Derek Bush rushed for a game-high 65 yards on 18 carries. On the defensive side, senior linebacker Lucas Sasala and junior LB Jacob Adams each recorded nine tackles, while sophomore guard Michael Harris recorded six tackles, including 2.5 for loss, a sack, and a forced fumble.

With the win, the Spartans improve to 7-0 overall and return to action on Saturday, Oct. 30 for its University Athletic Association opener at the University of Chicago at 12 p.m (CST). After the Chicago match up, CWRU will return home for the final two games of the regular season that includes the Nov. 6 matchup against Washington University in St. Louis.

With its loss, Wooster drops to 3-4 overall. The Scots return to North Coast Athletic Conference play on Saturday as they host Hiram College for the first of three-straight league home games to close the regular season.