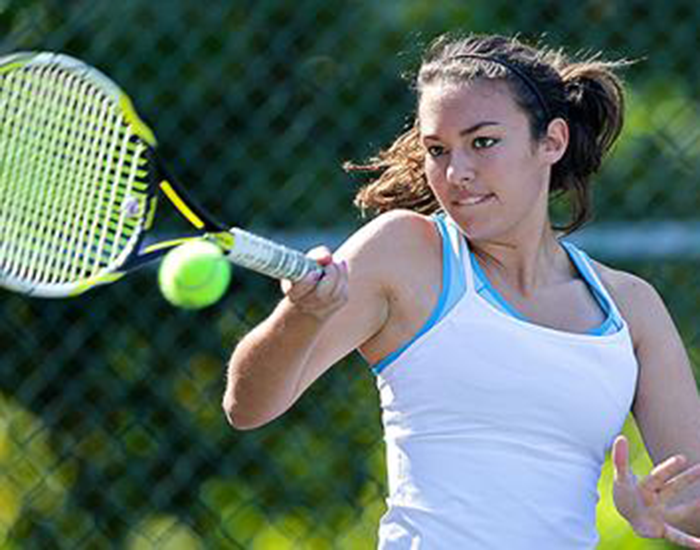 Sophomore Marianne Bonanno took home two points in the team’s 7-2 victory over UW-Whitewater. Bonanno defeated Kelly Foster in singles 6-1, 6-4 before teaming up with Emily Pham for an 8-5 win in doubles.

The No. 25 nationally ranked Case Western Reserve University women’s tennis team fell in the third-place match of the 2013 Midwest Invitational to No. 11 DePauw University by a narrow 6-3 score on Saturday afternoon. The two-day event was hosted by Gustavus Adolphus College at the University of Wisconsin’s Nielsen Tennis Stadium.

With the loss, the Spartans fall to 11-6 overall, while the Tigers, ranked second regionally, improve to 11-7.

Opening with doubles action, the Spartans grabbed a 2-1 lead as the No. 1 duo of senior Erika Lim and freshman Surya Khadilkar, as well as the No. 3 tandem of senior Emily Pham and sophomore Marianne Bonanno, each won by 8-5 scores.

In singles play, DePauw secured third place in the eight-team tournament by taking five of the six matches. Case’s lone win came at No. 5 from freshman Lauren Rovner via a three-set victory versus Elizabeth Young by scores of 6-4, 1-6, 6-2.

On the first day of action the Spartans cruised by No. 22 University of Wisconsin-Whitewater in the morning, 7-2, but fell by an 8-1 score to No. 6 University of Chicago.

Against UW-Whitewater, the No. 1 doubles tandem of senior Erika Lim and Khadilkar claimed the lone point via an 8-5 victory versus Alexandra Bayliss and Jessica Vitale. The Warhawks scored the points at No. 2 and No. 3.

Trailing by one, Case responded by sweeping all six singles matches. Zargham rallied back from a set down versus Bayliss, ranked No. 25 regionally, and won by scores of 2-6, 7-6 (7-3), 10-4.

The Spartans then reeled off four-consecutive straight-set victories in the No. 2 through No. 5 slots. Erika Lim, ranked No. 18 regionally, posted a 6-3, 7-6 (7-3) victory versus Jackie Vitale at No. 2, while freshman Taylor Sweeney was victorious by tallies of 7-5, 6-3 over Megan Kasten in the third spot. Khadilkar won at No. 4 by scores of 6-3, 6-1 versus Lauren Aguilar, while Bonanno cruised at No. 5 versus Kelly Foster with sets scores of 6-4, 6-1.

Against University Athletic Association foe No. 6 Chicago, the Maroons, the Central Region’s top-ranked team, raced out and secured all three doubles points with narrow victories coming in the No. 2 and No. 3 slots.

In singles, the Spartans’ lone team point of the match came from freshman Michelle Djohan at No. 6 versus Stephanie Lee by a pair of 7-5 set scores.

The Spartans and their No. 25 national ranking, the highest in program history, have a week off before their next match on Friday, April 12 at Allegheny College.

Case is currently ranked fourth in the Intercollegiate Tennis Association’s Central region behind conference foes No. 1 University of Chicago and No. 3 Washington University. Zargham is currently the team’s top singles player, ranked No. 3 in the region while Erika Lim also cracked the top 25 at No. 18. UAA rivals Washington and Chicago each have two players ranked in the Central Region’s top 25. Megan Tang is the region’s top ranked player, and Linden Li is No. 17 for the Maroon while Theresa Petraskova is ranked second, and Kate Klein is No. 21 for the Bears.

Chicago also holds the top ranked doubles team of Tang and Helen Sdviskhov as well as the No. 6 duo of Li and Kelsey McGillis.

Zargham and Erika Lim are the third best team in the central region. Washington doesn’t have a top seeded doubles team.

Case will host their only home match of the season on Saturday, April 20, when they host Walsh College on Seniors’ Day and the team’s Rally for the Cure match.

The Spartans will then close out the season from April 25 to 27 when they travel to Altamonte Springs, Fla. where Emory University will play host to the 2013 UAA Championship.