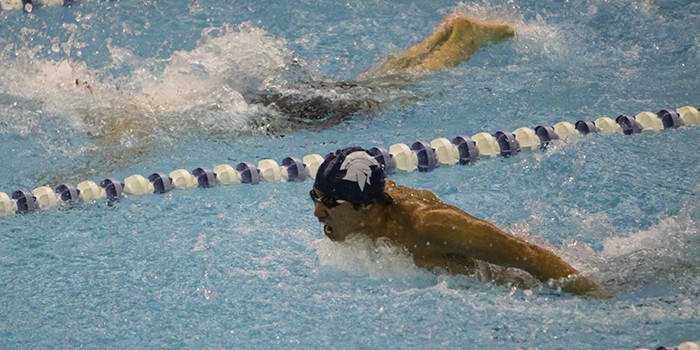 The men aren’t resting on their laurels, as they know they’ll meet these four teams again in four months at the UAA Championship in Chicago.

“We have to swim against these teams again at the conference championships in February. A lot can change in three or four months and we have to continue to advance our training,” said senior Kyle Tepe.

The men’s performance propelled them to No. 6 in the nation in the Endless Pools/Collegeswimming.com performance rankings. The rankings index takes into account the team’s top 75 percent of swims against all Division III performances in the past three years. Case was the second highest UAA team in the rankings behind No. 1 Emory University. Seven of the men’s teams, with the exception of Brandeis’s newly founded program, are in the top 25.

The men reached as high as No. 12 last year in the College Swimming Coaches Association of American poll.

The women were also ranked No. 16 in the performance index. They are seventh in the UAA in terms of the rankings, ahead of just Brandeis. Emory is at the top of the rankings while the University of Chicago, Carnegie Mellon, and Washington University are No. 5-7, respectively.

The men were led by a number of impressive performances across the board.

Freshman Aaron Tam was stellar is his debut as he replaces graduated distance swimmer Sam Geiger. Tam made his collegiate debut in the 1650-yard freestyle where he finished third in 16:48.42. He also finished second in the 200-yard freestyle in 1:47.27. To complete the cycle Tam then finished off his weekend with a victory in the 500-yard freestyle with a winning time of 4:47.86.

The Spartan men’s relays were also in fine shape as they won three of the five relays on the weekend. The first came in the meet’s opening event, the 400-yard medley relay, when sophomore Andrew Bollinger, junior Sean Nickley, sophomore Eric Haufler, and junior Gus Bailey finished with a winning time of 3:33.22. The same quartet also took home the 200-yard medley relay in a winning time of 1:36.45. The men closed out of the weekend with a win in the 400-yard freestyle relay with as Eric Haufler, juniors Heath Hudgins, Scott McHenry, and Gus Bailey finished first in 3:12.76.

Nickley had an impressive individual performance as well finished as a double winner with wins in both the 100- and 200-yard breaststroke disciplines with times of 59.81 seconds and 2:11.92, respectively.

Junior diver Daniel Jacobson picked up a pair of second places on the 1- and 3-meter dives as he finished with 271.70 and 261.75 points, respectively.

“We all knew we had a talented and deep team, but this weekend we proved to our conference how focused and motivated we are when it comes to competition,” said senior Chris Emr.

Pakradooni also managed to pick up a top-three finish when she finished third in the 200-yard freestyle in 2:01.13.

The Spartans will be back in the pool this weekend when they host the Cleveland City Tournament. The meet will match the Spartans up against Notre Dame College on Friday night at 7:30 p.m. The winner of that meet will then swim the winner of John Carroll University vs. Lake Erie College on Saturday at 2 p.m. The losers on Friday night will match up Saturday morning at 11:30 a.m.

The winner of the weekend will then matchup with the winner on the other side of the bracket which includes Oberlin College, the College of Wooster, Hiram College, and Baldwin Wallace University. The championship meet will take place next weekend on Saturday, Nov. 10 at a time and place determined by the winners.