No pity for Slide the City 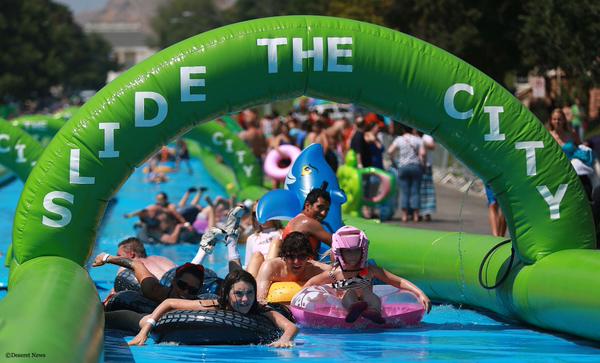 Opinions columnist Sarah Jawhari weighs in on the dangers and poor taste of Slide the City, a national slip 'n slide event.

In the face of one of the most severe droughts on record, cities in California took action to ban ‘Slide the City’ from setting up shop for the summer. The seasonal waterslide spans 1,000 feet, and requires a waiver and an online sign-up before participants can hit the water.

Los Angeles’ Department of Public Works denied permits to the organizers of the giant urban slip n’ slide only weeks before the event was scheduled last September. It’s no wonder that L.A. pulled the plug; water is tight, and the drought has impacted every facet of life for Californian citizens and wildlife. Excluding San Francisco, the slides won’t be present anywhere in California this summer for now.

But this hasn’t stopped Slide the City from rolling out their own red carpet elsewhere. More than 150 cities across the United States and Canada have signed up for the summer event. At $20-55 a ticket, with hundreds of thousands of participants each summer, Slide the City is generous enough to give back a small portion of their proceeds to a local charity. A thoughtful gesture, and we can only imagine the cut the city gets for the permits.

Slide the City claims that the water they use is recycled back to local sources, but cites no specifics about the cities they have already visited. The numbers have been kept tidily hidden. Reportedly, ‘only’ 20,000 gallons of water is cycled back to the top of the slide throughout the day. It’s unclear how much water is lost. In the face of their California ban, as well as water conservation skeptics, Slide the City retorts nobly on their website: “Large commercial centers use unlimited amounts of water and do not attempt to reuse or recycle the water.”

The tone is this: There are more evil guys other than us—we are just trying to make some money with our long, dangerous slide.

They advise bringing a floatie and water gun, but fail to recommend a helmet or pads. The first clause in the required waiver reads: “The risk of injury, illness, disability and/or death from the activities involved in the Event is significant.” Participants must sign the waiver and deliver it on the day of the event in order to participate.

For some, Slide the City is a dream come true. We can tack it up alongside extreme eating contests, unregulated rollercoasters, amateur shooting ranges and reckless trampoline stunts. That millisecond brush with death seems to appeal to the irresponsible masses. Personally, I would rather get my thrills in a way that won’t likely kill me. So when Slide the City opens in Cleveland this summer, I won’t be handing over a waiver for my life along with $40.

Regardless of what Slide the City declares, hosting a giant waterslide when half the world doesn’t have access to clean drinking water is not only wasteful, it’s in terrible taste. It’s a giant middle finger to the developing world, as well as California, which is in the midst of one of the most serious droughts in history. Yet here we are rolling out padded vinyl so that kids and adults can hurl themselves down the streets at speeds fast enough to break their necks.

It’s a free country, we’ll say. They should have their cake and slide it down the streets, too. They are a business. Are we not a capitalist society? Did Slide the City not originate from one man’s dream?

Certainly. But even in our forward thinking—dare I call it advanced—society, there are such things as bad ideas. Slide the City is a very bad idea. You are signing a waiver for them to use your water, take your money and free them of any responsibility should you get hurt. I refuse to hurl my little brother or myself down the Cleveland streets this summer while millions of children dream of rain elsewhere. No part of that screams “fun!” or “summer!” to me. Comparable to the Snuggie in its innovation, Slide the City is nothing more than a perverse exploitation of human rights, basic resources and, frankly, the stupidity of participants on the wait list.
Sarah Jawhari is a student at the Case Western Reserve University School of Dental Medicine.