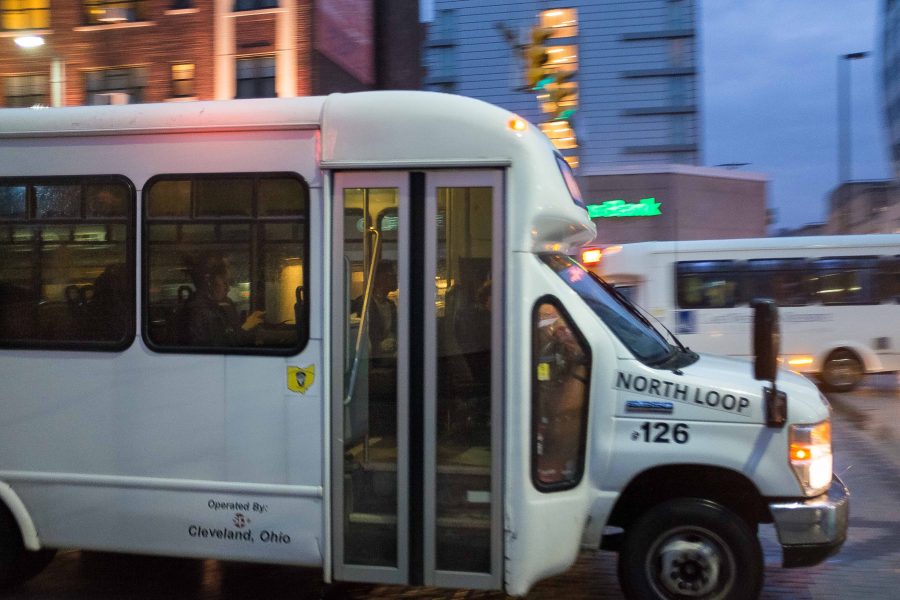 Out of safety concerns for the pedestrians, the KSL Oval is closed to all vehicles, including SafeRide and the North Loop shuttle buses. Students leaving KSL now access the shutttle at the Thwing Center.

At the beginning of this semester, students who commute via the Evening North Loop shuttles found that the buses do not stop in front of Kelvin Smith Library anymore. Instead, a new stop has been added at the west entrance of Thwing Center.

At the beginning of the Spring semester, KSL Oval was sealed off by cement pillars to prevent vehicles from entering KSL Oval, including SafeRide vehicles.

“The reason the university rerouted the shuttles was because there were vehicles driving around the Oval and it’s a safety concern, as it is a pedestrian walkway,” said Brian Ward, president of the Undergraduate Student Government.

Vice President for Campus Services Richard Jamieson explained that the vehicle restriction on the KSL Oval was announced through the Daily and signs were posted in KSL. Jamieson and Executive Director for Public Safety and Security, Frank Demes, explained in an email interview that “the Oval is not designed to accommodate large vehicles.”

According to USG Representative, Andrew Thompson, KSL Oval was also closed off to prevent “damaging the tiling of the KSL Oval.” He explained that by closing off the KSL Oval, Case Western Reserve University avoids “the expense and inconvenience of repairing the KSL Oval every spring.”

Though the change was made over the winter break, Ward and Vice President for Student Affairs Lou Stark had already discussed the issue last semester before November, along with President Barbara Snyder and the Graduate Student Association (GSA). Ward requested to the Division of Student Affairs that the shuttle needs to be visible from within KSL.

“I made it very clear that the number one concern is students’ safety, so I believe that where the shuttle pulls up is still visible from KSL.” Ward said.

The new stop was therefore chosen to be located outside of the west entrance of Thwing that faces KSL Oval. Jamieson explained that in order to make it easier to spot the shuttle, “a Standard Parking attendant was added at the new stop to assist patrons and serve as a ‘spotter’ for when the shuttle backs out of the shuttle stop location.”

Shortly after Ward, VP Stark, President Snyder and GSA decided on the best alternative, CWRU administration opened up the driveway next to the Thwing’s west entrance and sealed off both entrances to KSL Oval.

“I’ve used the shuttle going home from KSL at 1 a.m. more than I’ve used the shuttle any other time,” said first-year student Puja Desai. “At 1 a.m., when I’m only using the shuttle because I don’t feel safe walking home, I don’t want to have to walk all the way to Euclid where I feel even more scared just to wait 10 more minutes for the shuttle to come.”

Jamieson explained that on occasion the shuttles pick up passengers on Euclid Avenue, instead of backing-up onto the sidewalk when it is covered with snow.

Fire trucks, ambulances or CWRU Police vehicles cannot drive on the KSL Oval. They can still access the building from East Boulevard or Euclid Avenue. CWRU Police can also unlock and move the barriers.