Not just for kids

Comic books for the totally grown grown-up that you are

Graphic novels are easy to overlook, especially when you’re an adult. As a child, I remember feeling ashamed of wanting to pick the books that contained more lines, shapes and colors than words. They were childish—“Diary of a Wimpy Kid,” “Captain Underpants”—you get the idea. But a good comic, online or printed as a series, has always been my guilty pleasure. It may be an “easier read” because there are pictures, but illustrations serve as a gateway to plots as challenging and complex as their word-heavy counterparts. A good drawing has this funny way of enhancing an already interesting story—and these narratives do not lack substance. If anything, graphic novels can be consumed quickly, but are also great to read more than once, as with each reading I almost always notice something which had gone undetected the first time around, be it in the art or in the actual storyline.

Bryan Lee O’Malley’s style is well known due to the success of his earlier series (turned movie—good movie, I might add), “Scott Pilgrim.” His characters are recognizable not only by their big cartoon eyes and pointy hair, but for their cynical humanity. There’s no doubt “Seconds” is perfect for adult readers—main character Katie is nearing 30 and facing a mid-career and personal life crisis. “Seconds,” the restaurant Katie and her friends opened years back, is successful with or without her—technically, the 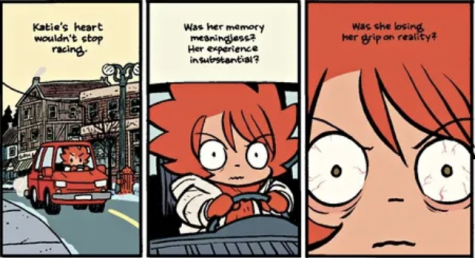 restaurant no longer belongs to her and she can’t completely shake the ex-boyfriend from her past. She’s as good as trapped—between relationships, between jobs, between happiness and a state of panic. It doesn’t help that Katie literally lives above the restaurant, and can’t escape the orbit of her past. The original staff has since moved on to bigger and better things, so it’s no wonder she jumps at a mysterious opportunity that seems to give her infinite options and revisions. O’Malley plunges you into a world that balances the whimsical and the real perfectly, as Katie is flawed and not always likeable, but struggles with reality in a way that feels oddly familiar (see, human). But can she really control the universe without consequences?

Overall, “Seconds” is a really fun read. The story is intricate and unexpected, but with a healthy dose of human error and interesting art to match. It’s on the longer side of this collection, but can be read quickly or broken down into chapters and easily revisited.

“Seconds” is available digitally through Google Play Books, Apple Books and Barnes & Noble for $7.99, though it is definitely worth owning in print.

“They Called Us Enemy” by George Takei with Justin Eisinger, Steven Scott and Harmony Becker (2019)

Two hundred-odd black-and-white pages do an effective and beautiful job of retelling the experiences of George Takei and his family after being “relocated” to internment camps in the U.S. during World War II. Following the 1941 attack on Pearl Harbor, President Franklin D.  Roosevelt signed executive order 9066 which authorized the forced removal and isolation of all people of Japanese descent—American-born or otherwise. This graphic novel is a visual memoir, a narration of hardships and small triumphs Takei and his family encountered during their internment. Between the years 1942 and 1945 over 100,000 individuals were uprooted from their homes, loaded onto trains and forced into shabby camps that were to be “home” for an indefinite amount of time. People’s regular lives were upended by a political action that had nothing to do with them; Takei, his parents and 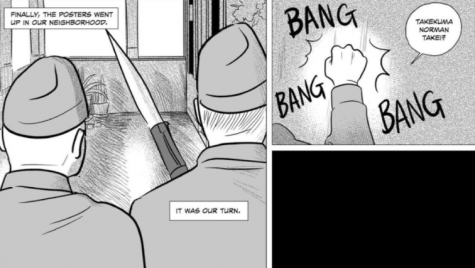 thousands of others were forced to adapt, comply and endure.

“They Called Us Enemy” is bittersweet, as Takei recalls many childhood-colored memories that weren’t all bad, like Christmas in the camp or getting into trouble with guards. Joy was limited but possible in the strained conditions and Takei takes care to show moments of innocent fascination and fun within the confines of a barbed wire fence. They played games of pretend war like other kids, but with a heartbreaking twist: no kid wanted to be the “Japanese cowards,” but the heroic Americans. The Americans always won.

It’s easy to trust the deceptively cute cartoon George, until the frenzy of racial tension and protest (literally) crashes into him. The narrative follows Takei into his young adult life to a time where he questions his childhood memories and the actions of his parents, including his mother, who agreed to renounce her citizenship when she thought it would keep the family safe from being separated.

Takei has since come a long way, now best known as an actor made famous by his role in “Star Trek.” It is because of this success that he was able to produce this novel and shed light on a painful and dark history shared by a whole generation of Japanese citizens in the U.S.

History books aren’t often written by those who have been oppressed, especially in a format that makes a tough-to-chew subject accessible. But after doing just that, Takei highlights current events to bridge his own experiences, and those of other marginalized groups, to the present day, cooly suggesting the ability for history to repeat itself when the U.S. (the whole country? Or maybe just the government) acts quickly and quietly. The disturbingly recent images of immigrant children in cages rightfully strike a harsh pang of grief more than familiar to Takei and, if anything, he urges readers to keep an eye tuned to injustices that continue to plague the U.S. more than half a century after leaving the camps.

“They Called Us Enemy” is available digitally through Kindle and Google Play Books for $9.99.

“Stitches: A Memoir” is another take on the graphic novel memoir, this time detailing the early life and adolescence of artist David Small. Its illustrations are bolder than the previous volumes, straying away from what could be considered stylistically “cute.” There is an emphasis on shadow and movement, giving the characters (Small and his family) a slightly jarring effect. The

illustrations reveal that Small’s story is a darker one, steeped in disturbing, often traumatic childhood events.

Small’s early life is not abnormal, albeit the familial predisposition to illness that haunts him relentlessly, often earning him unwanted attention and treatment at the hands of his own father.  After a seemingly simple procedure renders him voiceless, Small recounts the span of time his affliction gripped him at the throat, literally and figuratively, while he was completely unable to control or process what had happened to him. The story becomes increasingly visual, swallowing you whole while Small slowly unravels his experience with physical suffering and the havoc it wrought on his self-perception and mental state. Of course, much of this unraveling is not explicit, but is evident through dark and intense imagery that pulls you right down with him. The value of a visual element in a story like Small’s is unmatched as each image is conjured in bold strokes of black marker. Sure, the story could be translated into words, but here, the graphic novel works as the best medium to capture the trauma of the turbulent string of events young David endured.  The terror Small felt in the interactions with his grandmother isn’t just apparent, but glaring in its visual recreation. His fear and pain is captured in bold

and vivid monochromatic strokes, leaving a sour aftertaste in our mouths. This is one spooky book. It’s almost painful to follow him through his medical trials and mental distress. But there’s a payoff: Small learns to control his own fate, and the relief is palpable, like the feeling of getting out of bed after a long sickness.

“Stitches: A Memoir” is available digitally for $10.44 through Kindle or $12.99 through Apple Books and Google Play Books.

“Tragicomic” is a new word, at least for me. It means something like both the meeting of tragedy with comedy and tragedy with the comic, which suits Alison Bechdel’s narrative well. Although I wouldn’t necessarily consider the events that orbited Bechdel’s coming of age completely tragic, her childhood and adolescence were certainly saturated in uncomfortable and grim moments. “Fun Home: A Family Tragicomic” focuses on those weird, ironic happenings that acted as the catalysts that pushed Bechdel to reach beyond the life her parents had grown to accept. Growing up in a small town never seems to favor minority sexualities, and 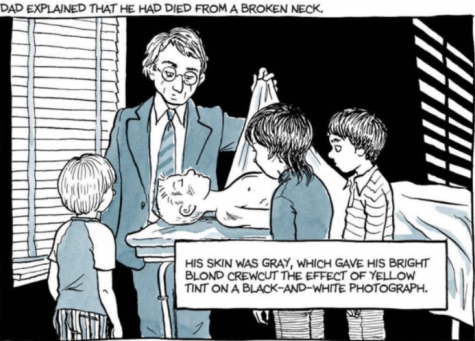 Bechdel’s early life is no exception.

Instead, her coming out, and of age, are bound tightly to her experiences at home, with a closeted father and long-suffering mother, and at the family business, a funeral home (spoiler alert—“fun home”).

Spending your formative years playing pretend amongst coffins and cadavers is far from typical, but proves to be a source of reflection when Bechdel is confronted with the loss of her dad, the same man who had, only pages before, tended to the dead himself.  Love, death and sex are fiercely, intimately entwined as Bechdel untangles her own relationships, mental illness and grief in the pages of her graphic novel, leaving us with an incredibly detailed account of multiple lives built from turning points that are dark, funny or both. Bechdel easily jumps between decades, recalling her early qualms and moments of clarity about gender and sexuality that helped to cement her own identity later in life.

Now, Bechdel is well established as an artist (known for comics like “Dykes to Watch Out For”) and as something of a queer icon—hopefully the Bechdel test is something you’ve at least heard of. If you haven’t, Google it.

“Fun Home: A Family Tragicomic” is available through Kindle, Google Play Books and Apple Books for $2.99.