Not so home for the holidays 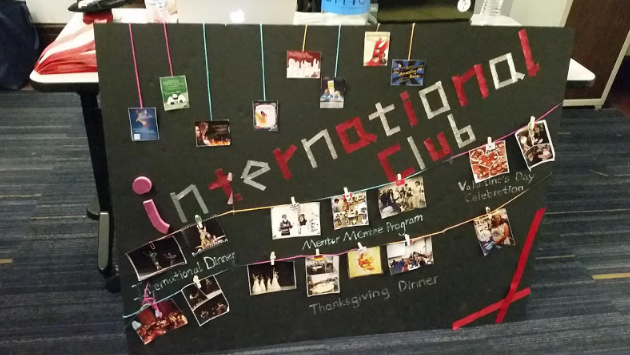 Thanksgiving can be summed up in one word: home. For some, their homes are here in Cleveland. For others, home is a short plane ride away. But here at Case Western Reserve University, about 16 percent of the students are international. Their homes are in Buenos Aires and Beijing, places thousands of miles away from Cleveland.

That is why the International Club (I-Club) exists, to help create a home in Cleveland for those whose homes aren’t nearby. Every year, I-Club hosts its Thanksgiving Dinner for students who cannot celebrate Thanksgiving with their families. This year, the dinner was on Nov. 18 from 6:30-8 p.m. at the Thwing Center.

It was easy to feel the amiable and festive atmosphere the minute one walked into Thwing. The tables were clothed in orange tablecloths with festive centerpieces and scattered with coloring pages of traditional Thanksgiving objects. People were joined together at tables, laughing at jokes or talking animatedly about their recent tests.

The night began with a small speech from Amy Qin, the president of I-Club, who remarked that although traditionally “Thanksgiving was a time to spend with friends or family,” students who could not go home were welcomed to celebrate it with I-Club.

With that, students lined up to receive food, which was the traditional Thanksgiving fare: turkey slices, vegetarian lasagna, mashed potatoes with gravy, green beans, cranberry sauce, bread rolls and pies.

The food was a hit, especially for students who were celebrating Thanksgiving for the first time. Anita Lu, a first-year student who grew up in Shanghai, said that she “barely remember[s] celebrating a proper Thanksgiving [at home].”  She commented that “I-Club really pulled off a wonderful dinner, with great atmosphere and food.”

Haosheng Li, vice president of I-Club, agreed with Lu. She said, “Some of the students we asked said that they particularly enjoyed the cozy atmosphere of people getting together and chatting over some delicious Thanksgiving food.”

For Parv Sud, the president of Cedar Community Council and a first-year international student from Bangalore, India, adjusting to life in the U.S. was a little difficult. “Initially it was tough, considering that I’ve never lived alone before and had always had my parents and sisters around,” he said. However, Sud said he thought that his first semester at CWRU was both “amazing and challenging.”

According to Li, the Thanksgiving Dinner provided students like Nguyen and Sud “a place to reunite with their friends and meet new people.” Li also said that the I-Club was very happy about the event turnout. Since the dinner, she has received “many positive feedbacks from our guests, including students and staff from [the] International Student Services office.”