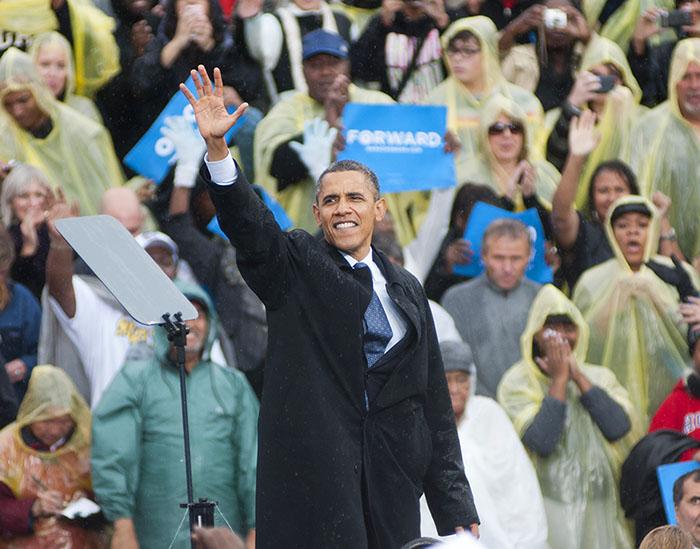 On Friday, Oct. 5, President Barack Obama made a campaign stop in Cleveland to rally his supporters to vote early and convince undecided peers to vote for him. Earlier in the day, Obama spoke in Fairfax, Va., trying to visit as many of the nine vigorously contested swing states as possible before the Nov. 6 election.

Though clouds and intermittent rain descended upon northeast Ohio for the day, about 9000 supporters still showed up at Cleveland State University’s Krenzler Field to watch the president speak. Covering their heads with blue signs emblazoned with the word “forward,” people braved the weather on the field and in the stands. Prior to his arrival, various pro-Obama local figures took the podium to build the crowd’s excitement.

“Ohio, and Cuyahoga County in particular, are going to decide this election,” claimed Congresswoman Marcia Fudge (D, OH-11), who represents downtown and eastern Cleveland, as well as a few eastern suburbs. “The 2008 election was about making history…Now it’s not about who’s in the White House, but who’s in your house,” she announced.

As Obama’s motorcade approached the stadium at 2 p.m., the crowd erupted into chants of “four more years” and “fired up, ready to go.”

First year CSU student Tatiana Brown introduced the president at about 2:30 p.m. Brown is the first member of her family to attend college and attributed that opportunity to Obama’s background and policies.

“It is such an honor to have a president who’s been in the shoes that I’m in today,” she said. Brown praised Obama’s decision to extend the federal Pell Grant. In keeping with the overall theme of the event, she implored the crowd to register to vote before the deadline, which passed on Oct. 9.

Obama then took the lectern and spoke for about 20 minutes. He focused on job growth in Ohio, repeatedly citing a national employment report released that morning that claimed the addition of 114,000 jobs in September. He also discussed economic policy.

Obama was most passionate when talking about taking care of military veterans. “We need to make sure when vets come home and take their uniforms off, we serve them as well as they served us,” he said.