Obama inspires crowd to be “Stronger Together” 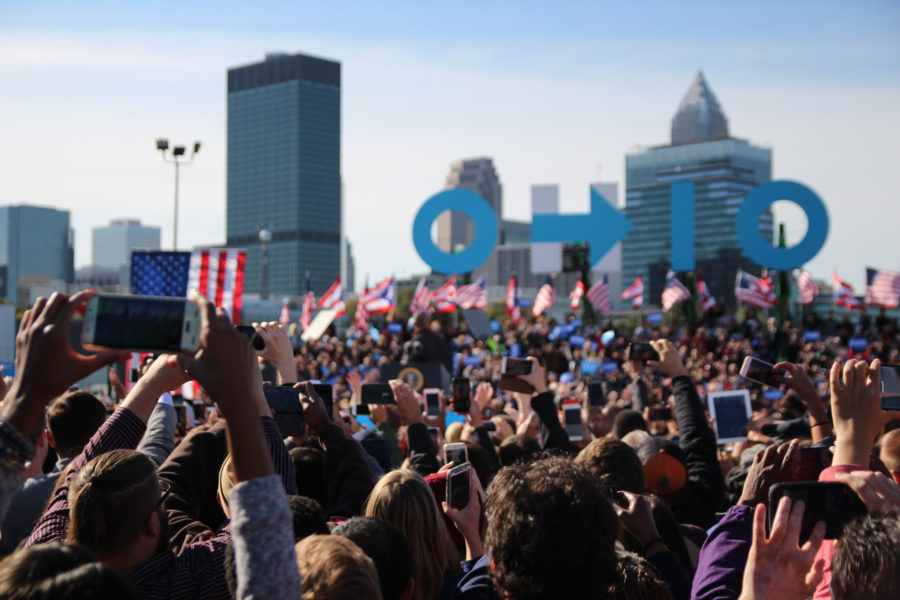 Friday morning at 7 AM, those at Burke Lakefront Airport may have noticed the winding line of people that trailed off into the distance. Despite the Cleveland weather—cold enough to see every breath—students and elderly alike came to political rally. In anticipation of the November general election, President Barack Obama has been campaigning for Democratic nominee Hillary Clinton and against Republican nominee Donald Trump. On Friday, Obama spread his message of support to Cleveland.

“Since I’ve been in Cleveland, this time it seems like there’s an extra pep in your step.” Obama said with a grin. “Did LeBron have something to do with it?” he said, congratulating the crowd on winning the NBA championship.

The details of the event had been finalized 3 days prior. Even with the short notice, there was no problem attracting nearly 2,500 people to the event. Many were drawn to the mere presence of the president. Over his two terms as president, Obama has developed a reputation for his powerful prose. Those in attendance were enthusiastic to hear his words in person.

“Obama’s a great orator…In my opinion, he’s one of my favorite presidents,” said Nimra Hassan, a second-year at Case Western Reserve University.

Similar sentiments were shared by those in attendance, including Cleveland resident Betty Easley. “When you get to hear President Obama, you feel a warmness…like he’s known you all your life. It’s a feeling that goes all the way through your entire body.”

The Crowd Waits for Obama 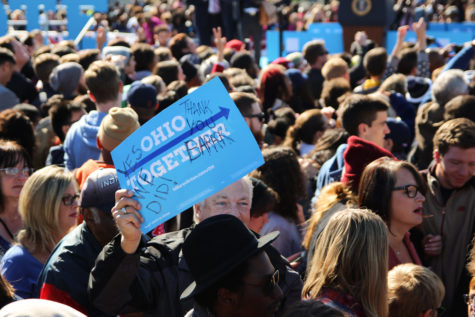 The crowd was a snapshot of Ohio’s political voice, a conglomeration of diverse backgrounds, unified by a shared passion. The enthusiasm of those attending could be seen from the looks on their faces and their contagious smiles.

“We have folks from all different walks of life—all different political backgrounds. They’re all excited to be supporting Hillary Clinton this year,” said Harrell Kirstein, a representative of the Clinton campaign.

A series of introductions were performed by various Clinton supporters, including Cleveland Mayor Frank Jackson and Ohio Congresswoman Marcia Fudge. Their testimonies highlighted their support of Obama and Clinton, but their main message was for people to get out to vote.
“If we’re going to win, it’ll be because of you,” Jackson said.

The audience agreed. They wanted their voices heard.

“Is [Trump] going to be president?” Fudge asked.

The crowd replied in unison. “No!”

Neither overwhelmingly Democrat nor Republican, Ohio has been referred to as a swing state and an informal indicator of who will win the presidency. Since 1962, the candidate that has won Ohio, would go on to win the presidency. Polling data indicates that Ohio’s election may be closer than expected, giving undecided and new voters even more impact. The most recent Ohio poll indicate that of likely voters, 42% will vote for Trump and 41% will vote for Clinton. Both margins are within the error of the poll, meaning that both candidates are equally likely to win.

With Ohio’s early voting period starting October 12, there have been significant efforts to maximize party turnout and put each party’s candidate in the lead in this highly contested state.

Quinn Winters, a fourth-year at CWRU, agrees that Ohio voters carry more weight compared to other states. “Coming from California, I feel that my vote actually counts for the first time.” 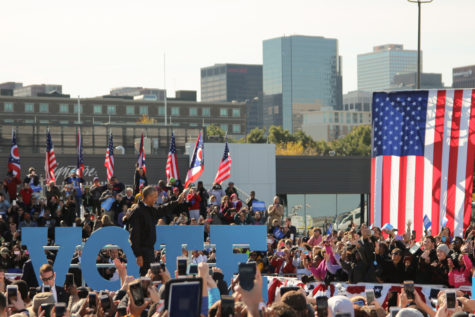 After the introductions, there was a pause. The crowd was silent in anticipation. In an instant, hundreds of cell phones and cameras reached up from the crowd to record the entrance. They wanted to preserve the history they witnessed, even if for a moment. The President of the United States walked on stage as crowd cheered.

“I love you Barack!” a man cried out.

“I love you back,” Obama said, much to the crowd’s delight.

Obama spoke on his vision for America and the inspiration the people across the country have given him.

“I see…Americans of every party, background, every faith, who believe that we are stronger together—young, old, black, white, Latino, Asian, Native American, folks with disabilities—all of us pledging allegiance to that same proud flag. That is the America that I know.”

“And there’s only one candidate in this race who’s devoted her life to that vision of a better America, and that is the next President of the United States, Hillary Clinton,” Obama said.

Fourth-year Natasha Kurien is a supporter of both Obama and Clinton. For Kurien, Obama’s presidency was the first one she was invested in. The successor to Obama, the first black president, could potentially be Clinton, making her the first female president. 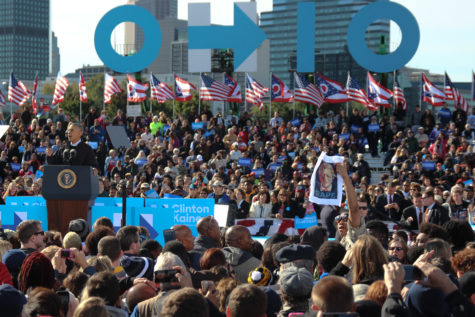 Regardless of how unified as the audience seemed, there was opposition to Obama’s message.

“Bill Clinton is a rapist and a liar!” an individual said from within the crowd. He held up a picture of Hillary Clinton’s husband, Bill Clinton, as he repeated his accusations. Written on the picture was “Infowars.com,” the website of radio host Alex Jones.

In late September, Jones opened launched a “Nationwide Campaign to Expose Clinton Sex Crimes.” This contest has offered $5000 to any person that said “Bill Clinton is a rapist,” while wearing a shirt that echoes that statement. Since the contest, similar disruptions have occurred at Clinton rallies across the nation.

When the critic was escorted off the premises, he expressed concerns about violations of his right to free speech. Families nearby supported his removal from the rally.

Unfazed by the outburst, Obama continued with the event.

“Come on everybody, let’s do our little chant.” Obama said. 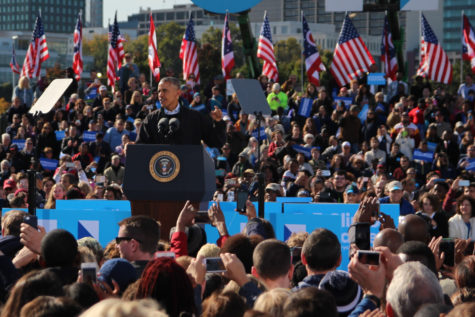 The focus of Obama’s speech was more than politics. It was one of unity and impact.

“We can’t demonize each other.  We can’t just refuse to compromise.  Even when we’re right, we got to work with other folks.”

Obama urged the audience and viewers afar to vote. He expressed his belief that every vote matters and cautioned against “the easy cynicism that says your vote doesn’t matter.” In a comparison to the struggles faced by the Civil Rights Movement, Obama said “it could not be easier for you to vote.”

Obama’s outreach to younger voters was key to his success in 2008. Now campaigning for Clinton, he again addressed the young generation. “Young people… you’ve been through a lot. You’ve grown up through war and recession and all kinds of incredible change—but I’ve seen in you the best in America. You’ve got to get out there and vote.”

A student from Ohio State University agreed with Obama’s words. He believes that voting is more than a right, it’s a responsibility.

“It’s important to have your voice heard. You can influence what happens. And that’s what you have to do.”

Obama warned the audience that all the achievements of his presidency could be undone if Trump won. He concluded his speech with a final press for Clinton.

The speech had ended, but to the crowd, his message lingered. Many were hesitant to leave, choosing instead to bask in fleeting presence of the president.

A supporter of Obama, Ronald Fields said, “It’s a pretty big deal. I hope to get up close and get a handshake.”

When the rally ended Friday afternoon, those in attendance left with campaign signs given out during the event.  Plastered on those bright blue signs was the Clinton campaign slogan. As they were departing Burke Lakefront Airport, hundreds of people went home to their friends and family with a vision that they were “Stronger Together.”