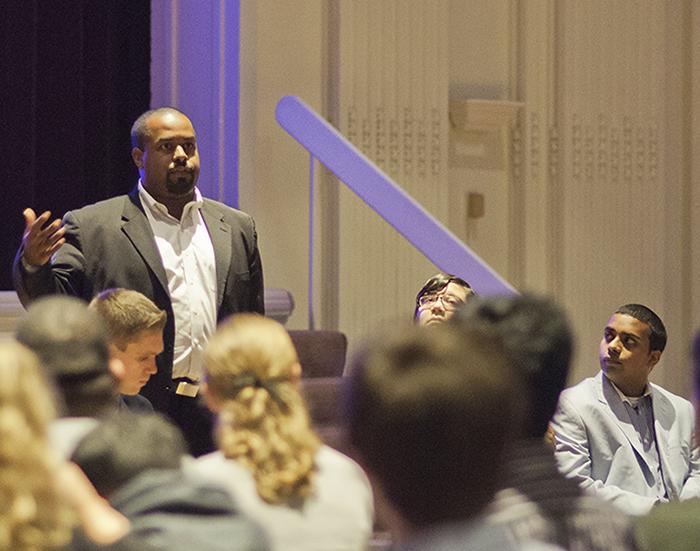 Last Friday, Sept. 28, part of President Barack Obama’s campaign made a stop at Case Western Reserve University. While it may not have been Obama himself visiting that night, his administration’s religious adviser Joshua DuBois spoke to about 60 people, most of whom were CWRU students, in the Thwing Ballroom. Case Democrats organized the event.

DuBois answered attendees’ questions about the role of faith in government and what it is like to work for the president, and discussed the relationship between church and state.

One of the major points Dubois emphasized during his speech was that while church and state should remain separate from a political standpoint, faith should be considered and examined by political leaders, since faith often plays an integral role in a person’s values.

“There are a lot of people in the country who are motivated by their faith and values, and it’s important to communicate what your candidate’s values are, and see if there is some alignment, and, if there is alignment, see why they should consider supporting your candidate,” DuBois said during his speech.

Later in the night, DuBois added that more people of faith should “come out of the closet and talk about who they are, what their values are, and what they believe.”

“There are people of value and beliefs all around us, they may not call themselves ‘X’ but they are motivated by a system of values,” DuBois said.

During the question and answer portion, freshman Brylan May, a member of Case Democrats, was the first student to ask DuBois a question. May wondered if the president consulted with DuBois before he publicly announced his support of gay marriage on May 9. May says that he was impressed with DuBois’ openness and honesty.

“I thought he was really straightforward. He wasn’t too political in his answer. He didn’t try to dodge like a lot of politicians,” May said.

In response to May’s question, DuBois stated that the president’s stance was not a formulaic stance, but a “deeply personal” choice that he made.

“It was really made on the basis of friendships that he has had. It wasn’t necessarily an equation that we set down and said ‘Look, here are the pros and cons’,” DuBois said. “It was more of a personal decision.”

During his time speaking, DuBois also lauded CWRU’s involvement in the President’s Interfaith and Community Service Challenge. This initiative, started in 2010, seeks to bring together people of different religious backgrounds. According to DuBois, the challenge looks to create the next generation of leaders that can “better navigate religious differences.”

This is the second year that CWRU has participated in this challenge. Last year, the efforts consisted of three retreats with student leaders of various faith-based groups.

Newman Catholic Campus Minister Tony Vento, who sits on the committee for the Interfaith Challenge, said that the program opens up new conversations between the different groups.

“The president’s challenge is an important contribution to building the common good,” Vento said.

Vento attended the event, but asserts that his presence was not a show of support or nonsupport of either presidential candidate.

“It was exciting to see [DuBois] here,” Vento said. “It is a good thing that the highest office in the land gives support to the challenge.”

DuBois began working for Obama in 2005, when President Obama was an Illinois state senator campaigning to be a United States senator. He says that he wanted to work for President Obama because he believes the president “is a man who can communicate his values.”

“I don’t think that I have blinders on,” DuBois said. “He’s a human being like everyone else; there are things I agree with and things I don’t, but I know he has a heart for our country, he has a heart for his family, and he has a decision-making process that really takes a diversity of views into account before he moves forward on a given issue.”

Before he was hired, DuBois spent several months attempting to contact President Obama. His first tries were unfruitful, but he says that he persisted because he had a “really strong sense that government could be a force of good in the world and wanted to be a part of that.”