Of Montreal bring glitter and glam to Beachland Ballroom 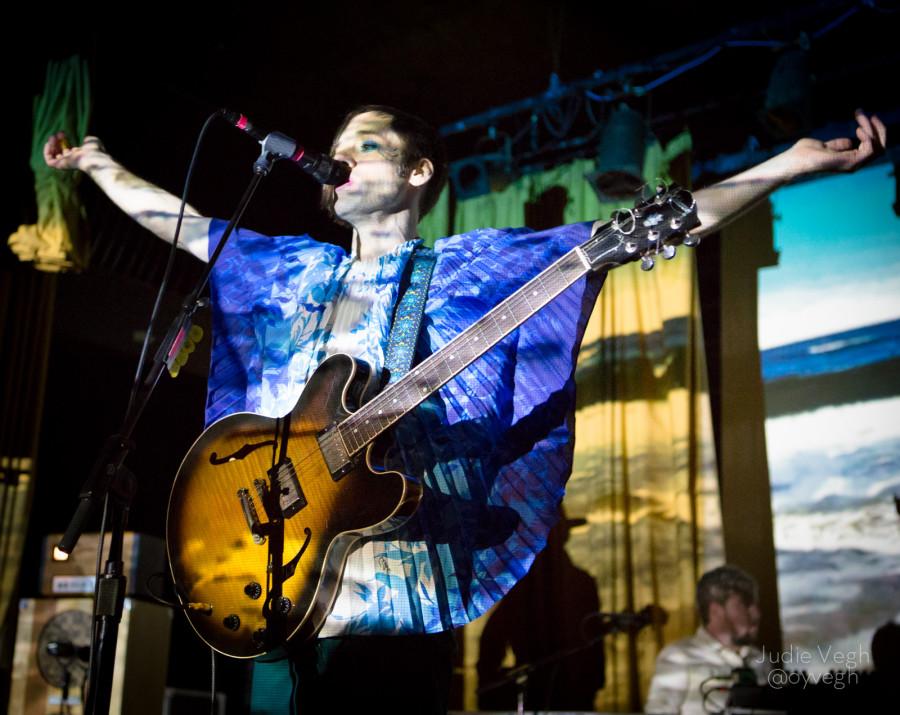 Of Montreal put on a psychedelic show, with an emphasis on fashion and stage lighting.

Queen’s Freddie Mercury once said, “A concert is not a live rendition of our album. It’s a theatrical event. I have fun with my clothes onstage; it’s not a concert you’re seeing, it’s a fashion show.”

Somewhere along the line in their career, of Montreal decided to adopt this mentality, treating a sold-out crowd of concertgoers at the Beachland Ballroom to a psychedelic spectacle on March 12.

“Are there any wizards in the audience?” asked a man clad in a maroon morphsuit and top hat. When the audience cheered back emphatically, he shouted, “That’s just what dragons would say!”

This exchange set the tone for the rest of the evening, as of Montreal soon appeared, led by frontman Kevin Barnes, amidst a circus of lysergic swirling lights that engulfed the Beachland stage. Dressed in a blue kimono and splattered in glitter, the of Montreal multi-instrumentalists delighted throughout the band’s 16-song set and four-song encore, weaving in and out of a Bowie-esque croon on old favorites like “A Sentence Of Sorts In Kongsvinger,” the funky “Gronlandic Edit” and the new “Bassem Sabry.”

Of the many memorable songs from that night’s performance, “Beware Our Nubile Miscreants” was a definitive highlight, featuring cameos from a man dressed as half Abraham Lincoln and half Venom, and a video reminiscent of something from “Schoolhouse Rock!” played backward.

Supporting of Montreal on this leg of their North American tour was Deerhoof, an avant-garde pop quartet that recalled early Björk with songs from its latest album, “La Isla Bonita.”

Of Montreal’s performance at the Beachland was that of a band operating at the height of its creative powers, performing a set of songs that flowed into each other like a perfectly constructed concept album. Indeed, if their most recent concert proved anything, it is that their music is best understood, appreciated and enjoyed live. Of Montreal is not to be missed the next time they are in Cleveland.