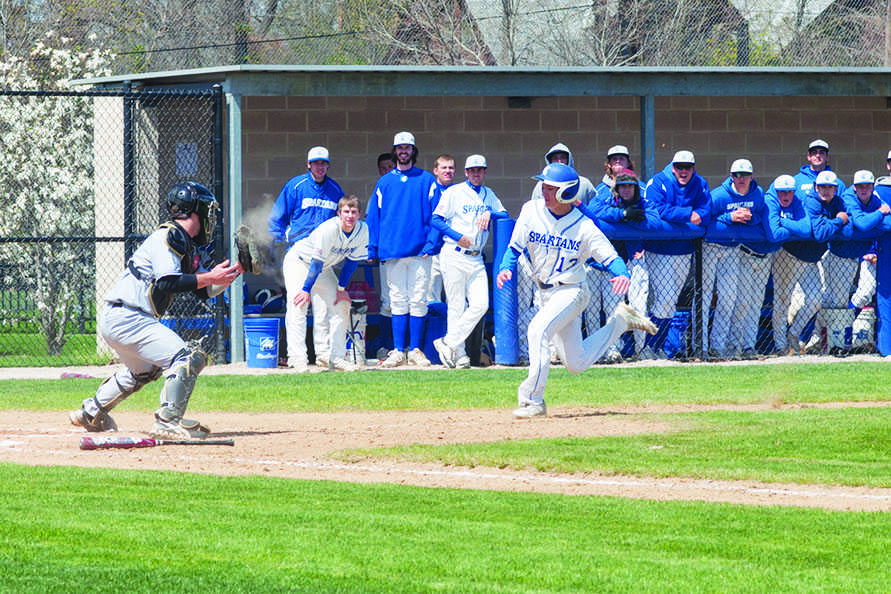 The Case Western Reserve University baseball team scored a season-high 18 runs in game two as part of a doubleheader split at local-rival John Carroll University on Tuesday afternoon at Schweickert Field. The Spartans were shut out in the opener, 11-0, but rebounded to take the nightcap, 18-8. With the split, the Spartans (23-10) have now won 14-of-18.

Combined for the day, senior shortstop Matt Keen was 4-for-9 with four runs batted-in and a stolen base.

In game one, the Blue Streaks (21-12) scored early and often with two in the first, three in the third, four in the fifth and two in the sixth. Jimmy Spagna highlighted the offensive surge with two homers, a triple and seven runs batted-in as part of a 4-for-4 effort at the plate. Mitchell Herringshaw also reached base four times with two hits and two walks.

In his first start of the season, junior right-hander Josh Suvak lasted just one inning and allowed two runs (one earned) to fall to 2-2 for the season. Freshman Connor Tagg threw 3.1 innings in relief, while junior Jose Vega made his first appearance in nearly a month and recorded the final five outs.

In a quiet game at the plate, the Spartans were led by junior outfielder Jordan Dague who was 2-for-2 with a double.

Game two took on a completely different identity right off the bat as the Spartans scored one in the first, three each in the second and third, seven in the fourth, and four in the eighth. Keen hit a two-run single to highlight the second, while Dague hit an RBI triple down the left field line in the third. Keen then drove in two in the seventh with two separate RBI singles as his squad batted around the order.

In the eighth, sophomore outfielder Andrew Gronski shot a two-run double down the left field line, and senior first baseman Brett Ossola ripped a two-RBI single through the left side of the infield.

John Carroll accounted for its eight runs with two in the third, three in the fifth and three in the eighth. The hosts threatened to add to their game two total, but Gronski made a fine diving catch on a liner hit to the gap off of the bat of Spagna.

For the Blue Streaks, Spagna started on the mound but only lasted two innings to drop to 2-6 for the season.

Offensively, Bobby Sabatino and Connor Marrero were each 2-for-4, while Marrero scored twice.

The Spartans return home to Nobby’s Ballpark to host Washington & Jefferson College in doubleheader action on Saturday, April 27 at 1:00 p.m.