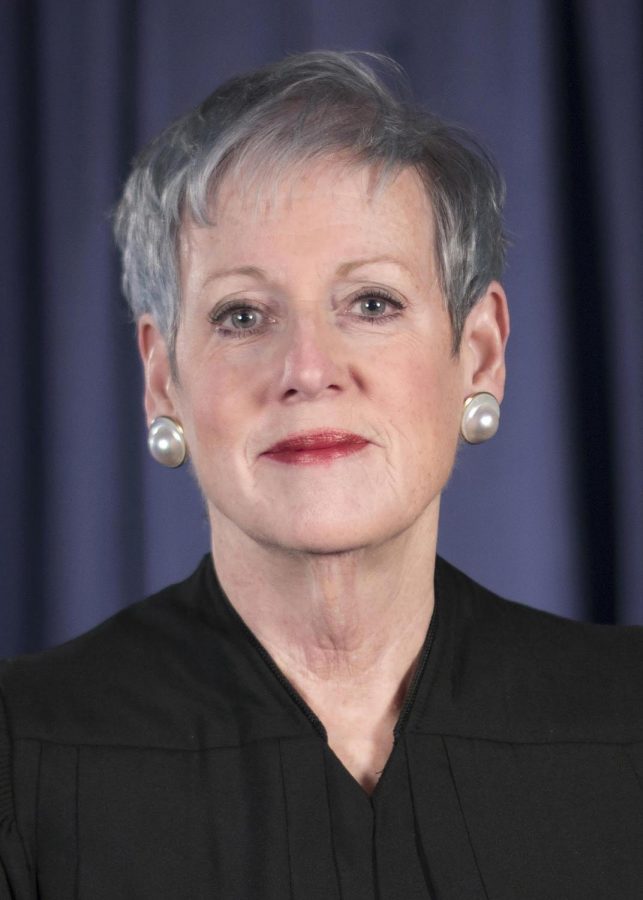 In the days before the 2018 midterm elections, Chief Justice of the Ohio Supreme Court Maureen O’Connor continues to advocate against the passage of Issue 1, a proposed amendment to the Ohio Constitution which is on the ballot for Ohioans this Nov. 6. The justice visited campus last weekend.

Issue 1, known as the Drug and Criminal Justice Policies Initiative, is a proposed amendment to the Ohio Constitution which would reclassify lower level drug offenses as misdemeanors rather than felonies. This constitutional amendment could cut prison time in half for those convicted of such offenses if they agree to go to treatment. In addition, inmates currently in prison would have the ability to appeal in order to get a reduction of their sentences, or even be released from prison.

While O’Connor, a Republican, and other judges across the state of Ohio support the idea of treatment as an alternative to incarceration in theory, O’Connor first takes issue with the fact that Issue 1 is a proposed constitutional amendment instead of a series of carefully tailored laws and policies that are more flexible and conducive to change with the times than an amendment.

“The problem is that the amendment to a constitution is a vehicle that becomes written in stone and becomes stagnant,” stated O’Connor. “This means such an amendment cannot be utilized in the face of the ever-changing landscape of the drug problem here in the state of Ohio. The issue of drug addiction is one that needs policy and statutory attention and not a solution anchored in the Constitution because [the Amendment] would be unable to change easily.”

According to O’Connor, the second problem with Issue 1 is the fact that almost all of the funding towards its advertisement and promotion on television and the radio in the days leading up to the election comes from donors outside of the state of Ohio. Big money donors who donated money to promote the passage of Issue 1 include Facebook CEO Mark Zuckerberg, Netflix CEO Reed Hastings and philanthropist Stacy Schusterman.

Issue 1 originated from a petition signed by enough Ohio voters that proponents of the amendment argue that it represents the closest thing to direct democracy to reach Ohio ballots this year. The petition sprang from legislative inaction, the fact that the voters of Ohio believed not enough was being done to reform the criminal justice system in relation to low-level drug offenses.

Those in favor of the amendment further argue that it specifically addresses the racial inequity of the Ohio criminal justice system, which they argue unfairly penalizes minority defendants in a state that is known for incarcerating large numbers of African-Americans—who make up 45 percent of the people admitted to Ohio prisons, as opposed to the 12.9 percent of the Ohio population that they make up.

However, in O’Connor’s eyes, the most compelling reason to oppose Issue 1 is rooted in the goal of the amendment itself: downgrading lower level drug offenses from felonies to misdemeanors.

“[Issue 1] will take away the incentive from people who are suffering from substance abuse disorders to carry out the terms of the probation, especially the term of treatment,” she said. “Issue 1 would take away a judge’s authority to place consequences on the defendant if they do not comply with the terms of their probation.”

In other words, O’Connor fears that Issue 1 would remove a judge’s discretion as to when to place a defendant in jail for violating the terms of their parole. O’Connor views a judge’s ability to imprison a defendant when they refuse to comply with the terms of their parole as imperative. Such an ability, argues O’Connor, is necessary when attempting to push defendants in drug related crimes towards rehabilitation.

More broadly, O’Connor opposes Issue 1 on the basis that she believes it would frame Ohio as a haven for drug traffickers and offenders due to the relaxation of current rules.

“This is not just about a fourth and fifth degree guy that’s sitting in jail, twiddling his thumbs, wishing he wasn’t there. This issue extends across all different kinds of people in many different situations, and that is the danger of Issue 1,” she said.

O’Connor has been criticized by proponents of Issue 1 for stating her opinion on Issue 1 because of her role on the Ohio Supreme Court.

However, O’Connor stands by her assertions that, under the Code of Judicial Conduct, judges are indeed permitted to “express their opinions on issues that affect the administration of justice” and they are, at least in O’Connor’s eyes, encouraged to do so.