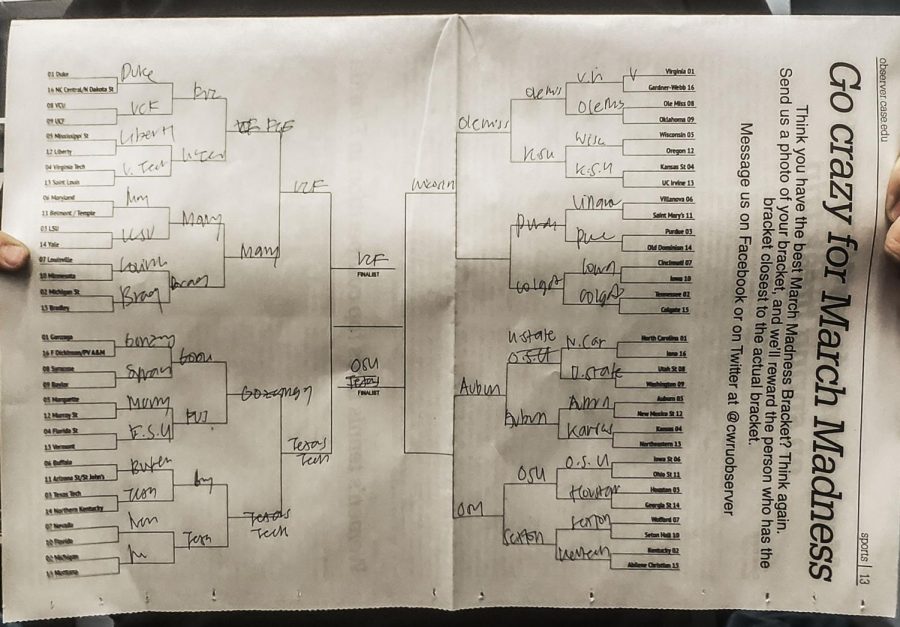 March Madness brackets are a ritual for many. Above is just one of the many brackets that have been created this year.

Every year, March Madness rocks the nation with torrents of busted brackets, crushing dreams and ruining sports enthusiasts’ chances of winning their office betting pool. This year was particularly brutal, with only top-seeded teams making it to the Sweet 16. The lowest seeded team to make it to the Sweet 16 is the University of Oregon at 12, followed by Auburn University,  a 5-seed. Oregon played the University of Virginia (No. 1) on Thursday, March 28 with results not available as of press time. Auburn will face the University of North Carolina on Friday, March 29 in an interesting matchup. The Sweet 16 games will end on Friday, March 29 with the Elite Eight games finishing the weekend.

Despite the surprising turn of events in the tournament, one perfect bracket remains. For the past several years the NCAA has been tracking brackets entered into major online games such as those hosted by Yahoo!, ESPN, CBS, Fox, Sports Illustrated and the NCAA itself.  Out of the tens of millions of brackets submitted this year that the NCAA has tracked, only one bracket has correctly predicted 48 out of the past 48 games correctly, blowing away the previous record of 39 consecutive games predicted correctly in 2017.

The bracket, named “center road,” was created by Ohio-native Gregg Nigl, a 40-year-old neuropsychologist from Columbus. Nigl has been filling out brackets for over 10 years and has commented on the surreal nature of having a successful bracket, let alone a perfect one. “Center road” is one of four brackets that Nigl submitted this year, with two of his other brackets placing first in their bracket groups.

Nigl has a history of successful brackets, winning competitions with a few different brackets at his work. He attributes his success to a lot of luck and a little strategy. According to an interview with ncaa.com, Nigl “always watch[es] bracketology,” and puts a lot of faith in the advice of the professionals. Other times, Nigl does what we all do and picks the team he likes best, either because of their city, their players or their coaches. While the team rankings, bracketology and favoritism all play a role, Nigl really emphasizes the role luck has to play in picking a winning bracket. In fact, one of the most astonishing aspects of the “center road” bracket is the insane odds of picking a perfect March Madness bracket from start to finish.

While most experts will tell you it can be difficult to calculate the exact odds, the NCAA has calculated the odds of picking a perfect March Madness bracket as one in 9.2 quintillion. While this is a feat that Nigl has yet to accomplish, the 48 games he has correctly picked so far put him only 15 games away from beating the odds and choosing the perfect bracket. If Nigl accomplishes this, he will be the first person in the history of the tournament to do so, according to the NCAA.

Ironically, Nigl has not been following this bracket closely, instead choosing to focus on his other submissions in more hotly contested bracket competitions. However, after receiving media attention from outlets ranging from Fox News to People Magazine, Nigl is sure to be watching. For those who want to follow along with the historic bracket, you can find it on ncaa.com and watch as the second half of the tournament unfolds.