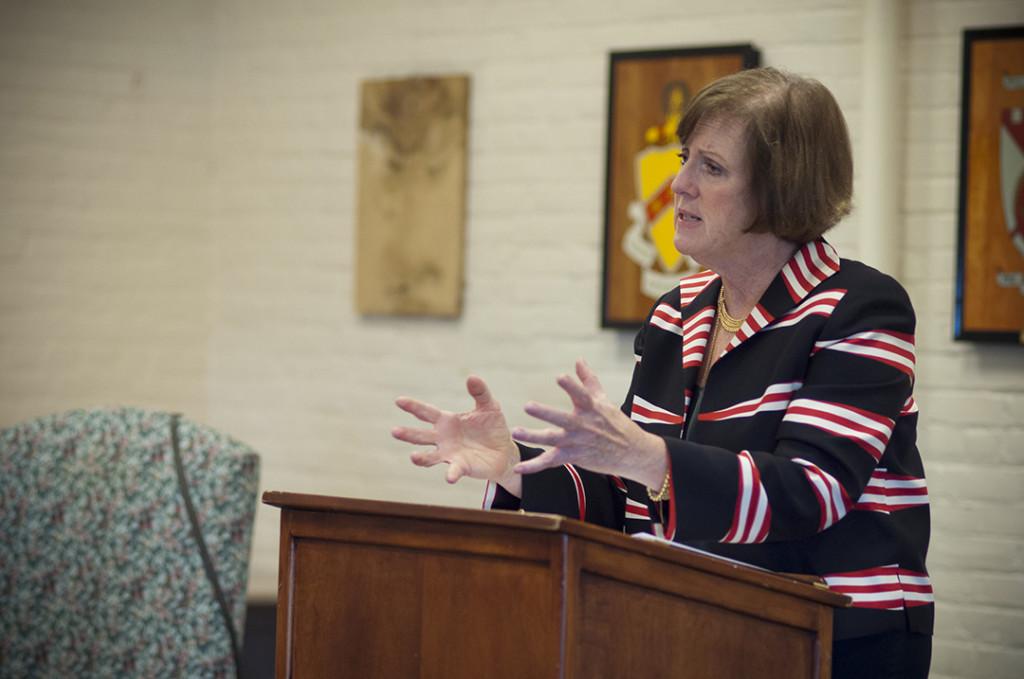 Chief Justice of the Ohio Supreme Court Maureen O’Connor speaks in Thwing about the challenges the law field is currently experiencing. She described it as a dynamic time for law.

Chief Justice of the Ohio Supreme Court, Maureen O’Connor, visited Case Western Reserve University on Oct. 11 to discuss her career with aspiring law students. She focused her advice and answers to questions on the “exciting and dynamic” place that practicing law currently has.

O’Connor was elected to position of Chief Justice of the Ohio Supreme Court in 2011, the first woman to ever hold the position in Ohio.

O’Connor told the room that she had gone to women’s schools before attending college, where she held positions of leadership. In law school, nearly half the class was made up of women. A mother of two children, one born while O’Connor was in law school and the other shortly after graduating, she talked about being a single mom while having a successful law career. She said it was “not easy, not at all,” but that her kids had their needs met and turned out well. When asked if she felt discriminated against or held back by being a woman, her answer was, with one exception, no.

The one instance of inequality in the workforce happened while she was a court magistrate. Though she did not find this out until later, O’Connor’s male counterpart was being paid a higher salary than herself.

Being appointed to the position of court magistrate was O’Connor’s first big promotion.

This opportunity allowed her to see the judicial system from inside, where she stayed for several years. She left this job in 1993 to become a common police court judge, before she was appointed county prosecutor.

The position of county prosecutor entailed prosecuting criminal cases and acting as the civil lawyer for government entities. O’Connor called this job “exciting and challenging,” and had a high success rate executing it. After her initial appointment, O’Connor ran for and was elected to the position again.

When Bob Taft ran for governor in 1998, he asked O’Connor to run on his ticket as Lieutenant Governor. O’Connor said that this was something she had never considered before, but asked herself— why not?

O’Connor also became the Ohio Director of the Department of Public Safety, which meant that after the terrorist attacks of Sept. 11, she was the “go-to person” for the newly formed Department of Homeland Security in Ohio.

It was in 2003 that O’Connor was elected to the Ohio Supreme Court, winning every county in the state and creating a female majority on the Court for the first time. When Chief Justice Tom Warren had reached the end of his term limits, O’Connor ran for the position.

Unfortunately, Warren died while in office, and O’Connor’s opponent was appointed to his position in the meantime. However, O’Connor did win the election, taking the position that she holds to this day.

Despite discouraging changes in the legal world, O’Connor was optimistic about opportunities for future law students. The message she sent is “You’re extremely lucky to be where you are, and to be considering entering the field at this point in history.” She said that it’s a very challenging and dynamic time for the law.

O’Connor emphasized a lot of change in the legal world. She said that gone are the days of graduating college, attending law school, passing the bar then joining a big firm and hunkering down for forty years. “And you wouldn’t want that,” she added. Those opportunities exist of course, but are few and far between, and are often given a false image perpetuated by media.

There is the excitement, she added, of being a litigant at trial in the heat of battle, but the image of the court guy simply isn’t true. Only a small percentage of lawyers even enter a courtroom anymore, and many legal services are performed without the attorney ever meeting their client. Part of this comes from the new model of do-it-yourself law, aided, of course, by the internet. People see legal services as an a la carte menu, where they can pick and choose what they want a lawyer for and what they are comfortable with doing themselves. Do-it-yourself sites such as Travelocity have their counterpart in the legal world with websites like LegalZoom and Rocket Lawyer that allow people to do this.

O’Connor said that changes like these open up opportunities, and those should be taken advantage of. She went on to say that this rate of change is dizzying, but by embracing it and making it your own, you find the niche opportunity.

It is undeniable, though, that law school graduates are falling on some hard times. The question was asked if law schools need to adapt, to which O’Connor said yes, and that some are better at it than others. Law schools are moving toward giving more opportunity for practical experience, which O’Connor called a good thing. She then explained that the Supreme Court sets school and bar standards, and then the law schools react to that. A current proposal in Ohio is that undergraduate and law school will be changed so that students spend three years in each— instead of four years doing undergraduate work.

When asked why she attended law school, O’Connor replied, “I started out in pre-med but then chemistry got in the way.”

Law wasn’t next on the list either. After obtaining her undergraduate degree she looked into teacher’s college, but decided she didn’t like kids enough for that. She then spent some time traveling, and a year both substitute teaching and waitressing.

After that she decided that she would apply to one law school, and pursue a career as a lawyer— and if she didn’t get in, bum around Europe for a while. Of course, she did get in, and never got the chance to wander Europe.

“I kind of regret it, but this law school thing has worked out pretty well for me too,” she admitted.

When discussing her life and legal career, O’Connor said “I never knew where my path was going to take me.” She never locked into a specific path, and believes that one misses opportunities that way. She said she was “always looking around the corner” and believes in maintaining a sense of curiosity. O’Connor said that the worst thing you can do is get set in a career goal and objectives.