Olivia Rodrigo’s rise has been sweet and “Sour” 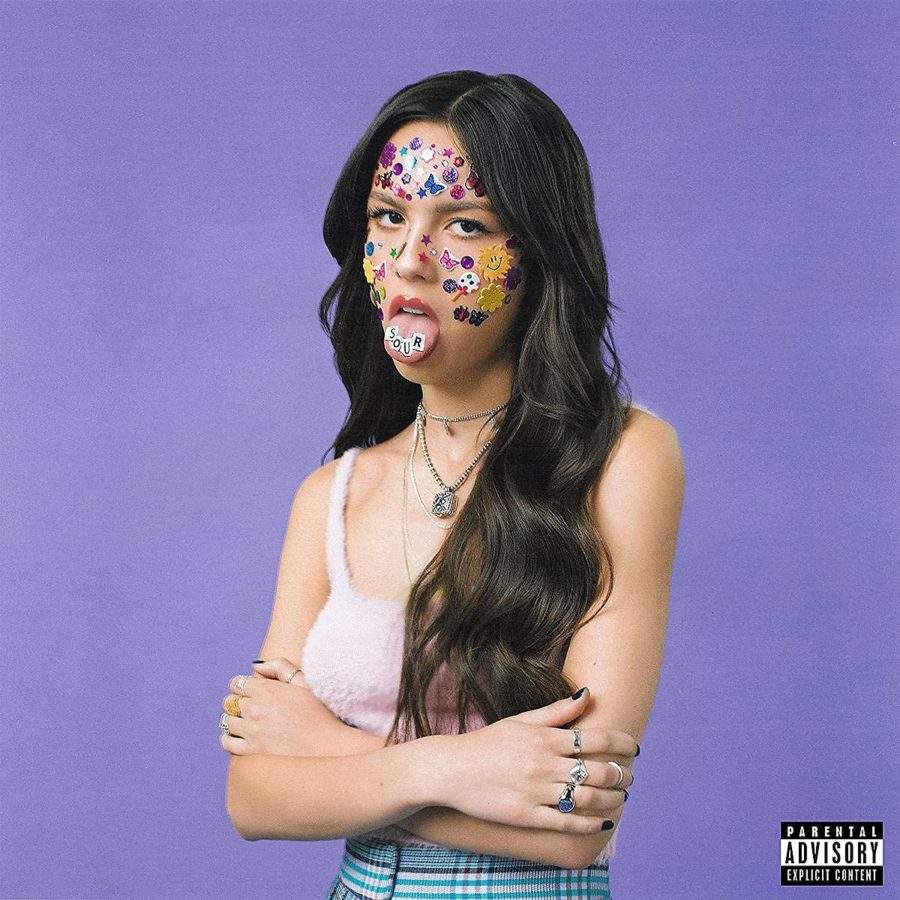 Olivia Rodrigo's viral breakup album, "Sour," establishes her as an one of the biggest rising pop stars of our generation.

I started following Olivia Rodrigo after hearing her song from “High School Musical the Musical the Series” and falling in love with it. “All I Want” did well, certifying platinum in the U.S., but I worried that she would be a one-hit-wonder. Soon, she began promoting a new song, and while I was excited to hear her voice again, I figured mostly just fans of the show would listen and that others would miss out on her voice. Boy, was I wrong.

When “Driver’s License” came out in January, it climbed the charts, constantly playing on the radio. Every time I went on TikTok someone was using the sound. It was deeply relatable, describing the pain of watching someone you once loved go off with someone else, reminiscing about the future you might have had. I was shocked—Olivia Rodrigo was a rising star, seemingly with no limits.

So it wasn’t out of the ordinary when her full album “Sour” came out in May and was immediately overwhelmed with attention. The album debuted at the top of the Billboard 200 chart and had the second-largest opening streaming week for a non-rap album ever.

The album’s emotional resonance is its strength. There is every genre of heartbreak and sadness in this album, whether through the upbeat pop-punk “brutal,” or through sob-inducing ballads like “traitor”. Discussing topics such as hoping for happiness even for those who hurt you and the emotional pressures of social media, every song allows the listener to find catharsis. Even people in committed relationships love “Sour,” despite it being a breakup album. But, in the end, it is a breakup album, one that helped a friend of mine grapple with theirs along with millions of other people I’m sure. Rodrigo has the keen talent to capture the feelings of this generation by extracting her experiences in a way that many people can identify with (and maybe even sing along with at the top of their lungs)—her work is universal.

After spending five weeks at the top of the sales charts, the album has since been certified platinum here in the U.S. The reception for “Sour” certainly doesn’t reflect its name, with adoration being the typical feeling upon listening.

However, in the age of social media, she was also met with severe criticism. Even on the same platform that she became popular on, Rodrigo had been torn to pieces on some sides of TikTok for “Driver’s License,” so it was no surprise to me that many people despised “Sour” too. What did shock me, though, was the pushback from the music community. Soon after the album debuted, Rodrigo got severe pressure to add Taylor Swift, one of her biggest influences, to the credits of “Deja Vu” for its similarities to Swift’s “Cruel Summer”. This is the second credit she had assigned to Swift and her songwriting team, as a non-collaborative credit was given to “1 step forward, 3 steps back” due to its similarities to “New Year’s Day”. While cases like this happen frequently due to the increasingly stringent nature of music copyright laws, it is astounding that just because Rodrigo felt influenced by Swift’s work she needed to be listed as a writer.

That isn’t the only credit Rodrigo has had to give out, however. When “good 4 u” went viral on TikTok, many users suggested that the song sounded very familiar to Paramore’s “Misery Business,” with some creating mashups of the two to show the resemblance. While it seems there was no formal legal action going on behind the scenes, the immense pressure once again forced Rodrigo’s team to add additional writers to the credits of a song.

This is a really tough topic because it’s true that “good 4 u” does sound like “Misery Business,” and honestly it’s the only credit here that I might believe is justified. I completely agree that we need to protect people’s creative rights, but I think we’re taking it much too far in this case. Every single musician will say they had influences in their time, with Swift herself having said to be heavily influenced by Shania Twain, but does that mean that she should get credit, and, more importantly, should she receive royalties on the songs inspired by her? Songs sound similar all the time—a huge death metal fan can differentiate between songs, but to those outside of the genre, don’t they all sound the same?

One of the biggest female pop stars of our time is rising, and she is an 18-year-old woman of color; more specifically, Rodrigo is Filipino-American, a rarely represented minority in the American music scene. Rodrigo is young and successful, but before she can even get started on the rest of her career, she’s being hindered by others. When a female star emerges, they are constantly ridiculed in the media for one reason or another. This same stark contrast existed between the absolute love for Billie Eilish from her fans when her first album dropped and the sheer amount of hate towards her seen in the media. This situation makes me question how we treat women in the music industry, as I rarely ever see male stars treated the same, exhibited by Kanye West’s highly praised “Donda” being unscathed by much public backlash, despite West’s many controversies.

Rodrigo is making herself to be one of the icons of this century, from her “Sour Prom” concert film, promoted by invites to fans with signs saying “Prom would be brutal without you” to her talk at the White House following an invite from the president to encourage her Gen Z demographic to get vaccinated. I’m hoping these issues with crediting don’t lead to a pullback in her creativity because she could be a long-lasting artist of our time.