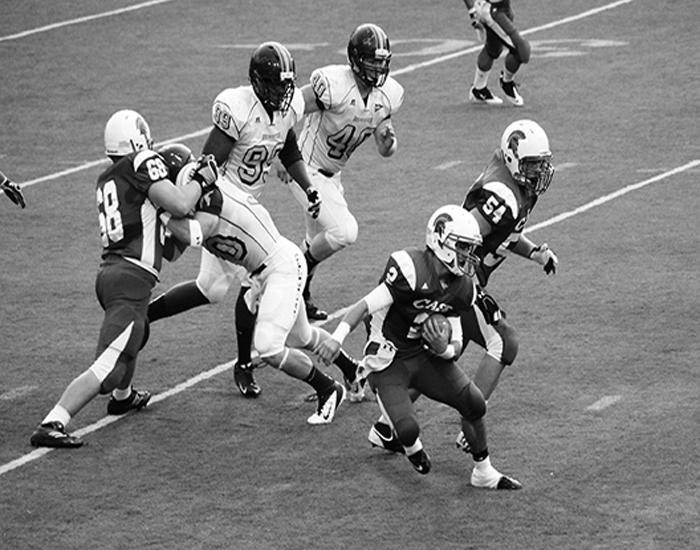 Case improves to 2-0 before home opener against Frostburg Saturday

After a narrow win against the Marietta Pioneers the week before, the Case Western Reserve University football team got back to work by shutting out Hiram College 35-0. The defense was in full effect as they limited Hiram to 124 yards through the air and 84 yards on the ground. Not to be outdone by his defense, senior quarterback Erik Olson completed 22 of 30 passes for a career-high 277 yards with three touchdowns on Saturday, Sept. 8, at Charles A. Henry Field.

“Saturday was a good win for our team. We were very pleased with our offensive performance and defensive shut out, although there is room for improvement as we move forward,” Olson said.

With the victory, Case continues its road dominance. In its last 27 away games, dating back to 2007, the Spartans are 26-1 and are on an eight away-game winning streak. Hiram (0-2) lost its sixth consecutive meeting with the Spartans, so the all-time series between the two is evened at 11-11-1.

The Spartans moved down the field on the opening drive thanks to a 20 yard reception by senior wide receiver Brian Rice. Olson then found freshman fullback Adam Hochman for a two-yard touchdown. The touchdown was Hochman’s first collegiate trip to the end zone and completed the 75 yard drive on nine plays.

“[Hochman] and Bryan Erb, our freshman offensive players, played a huge role in our offensive success,” Olson added. Freshman kicker Won Kun Park cleared the uprights and completed the point after to put the Spartans up 7-0 with 10:14 left in the first quarter.

The two sides then went scoreless for the next quarter of play before Olson helped Case add to its lead. An 11-yard touchdown pass from Olson to sophomore tight end George Darany capped a 14-play, 89-yard drive that included a 20-yard pass from Olson to Lapcevic. The score was also a career first for Darany, and Kun Park’s second point-after made the score 14-0 with 7:45 left in the first half.

Neither team could put up any more points for the remainder of the first half; the Spartans led 14-0 as both teams headed into the locker rooms.

In the third quarter, the Spartans looked to gain momentum and slowly began to take control of the game with their third touchdown of the game with 7:39 left in the period. Two possessions into the third quarter, the Spartans ground game got going with junior running back Kenny Riordan and sophomore running back Manny Sicre combining for 22 yards rushing. Riordan completed the drive with a one-yard score. Kun Park’s point after capped a 12-play, 58-yard drive that brought the score to 21-0. Late in the quarter, Hiram found itself at the Case 12-yard line as part of a solid 12-play drive, but that attack ended when the Terriers fell just shy on a fourth down play that returned possession to the Spartans.

Early in the fourth quarter, Case’s offense put the game away as Olson and Hochman connected for another score — an eight-yard reception — capping a seven-play, 70-yard drive. Kun Park hit another PAT to make the score 28-0 with 14:03 left to play.

Hiram’s next drive ended quickly, and the Spartans struck on special teams when senior linebacker Wade Self powered through the Hiram line and blocked a Thomas Kuczma punt, setting senior defensive end Adam Watson up for a 38-yard touchdown return, his first career score. Another point after by Kun Park, his seventh of the young season, increased the advantage to 35-0 with 12:37 remaining on the clock. From there, the Spartans defense took over as it continue its dominance over Hiram and helped Case cruise to an impressive 35-0 victory.

For the game, Riordan rushed for 54 yards on 11 carries and scored a touchdown, while Sicre tallied 45 yards on 12 carries. Lapcevic caught six passes for a career-high 132 yards. Hochman caught three passes while collecting two touchdowns.

Reflecting on the game, Olson said, “Both Marietta and Hiram had strong performances against us these last two weeks. We had a different offensive plan for each week. We saw an opportunity to throw a little more against Hiram’s secondary.”

Hiram was led by tailback Chris Austin with a game-high 59 yards on 20 carries, wide receiver Richard Simpson with nine catches for 51 yards, and defensive back Josh Peacock with a game-best 11 tackles.

Tomorrow, Saturday, Sept. 15, the Spartans will open their first home game of the season as Frostburg State University visits. “Frostburg State is a talented football team with a lot of great athletes on both sides of the ball. We need to have a great week of practice and preparation. We are excited about our home opener and look forward to a great team performance,” Olson said.

Case will look to improve to 3-0 on the season and show that they are as good at home as they are on the road. Kickoff is set for 1 p.m. at Case Field.