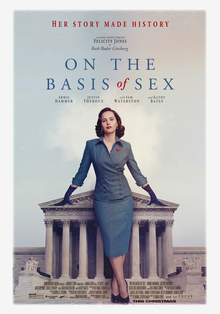 Although the movie begins with Ginsburg at Harvard Law School, the movie mainly focuses on her fight for gender equality and her role in the landmark Supreme Court case, Moritz v Commissioner of Internal Revenue, which led to many gender discriminatory laws being struck down.

The movie not only focuses on Ginsburg’s career as a civil rights lawyer, but also her role as a loving wife to her husband and the real life mutually beneficial relationship that the Ginsburgs had. When Martin gets testicular cancer during his second year at Harvard Law School, Ruth Bader Ginsburg goes to his classes and takes notes for him, in addition to doing her own work as a first-year student. Later in the movie, Martin shows Ruth the Moritz v Commissioner of Internal Revenue case, which started her career and her fight for gender equality.

However, the movie is a little indulgent in covering the Ginsbergs’ careers and does not seem to reflect on any of their character flaws. This bias is to be expected though, considering that it was written by Daniel Stiepleman, who is Ginsberg’s nephew.

In addition, the movie brilliantly shows how women are perceived within our society. Early in the movie, Ginsberg is invited to dinner at Erwin Griswold’s house, then dean of Harvard Law School, where he asks each woman present why they were taking a place of Harvard Law School that should have gone to a man. Although this idea is important to establishing the overall theme of the movie, this idea felt overplayed and overemphasized.

Despite its flaws, “On the Basis of Sex” is a well done, cohesive film detailing Ginsberg’s early career as a human rights lawyer. This movie is a testament to the strength of Ginsburg and her perseverance in difficulty and helps to show why Ginsberg is very popular and respected today.