Basketball a game back from first in UAA following snowy weekend 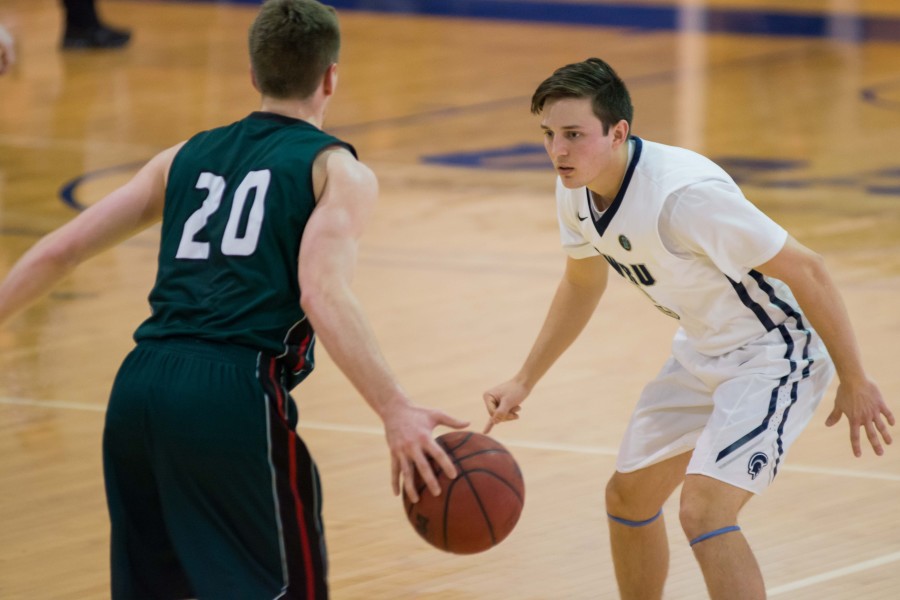 Jordan Dean guards a Washington University player in a lost at home. Last weekend, the team split their roadtrip at NYU and Brandeis.

The Spartans split last weekend going 1-1, first seeing their losing streak extend to three on Friday as they fell to the New York University (NYU) Violets 94-73. Despite four Spartans scoring double digits, including a standout 18-point performance by senior guard Julien Person, the men were unable to keep pace with the Violets’ onslaught.

The Violets came out of the gate strong shooting 11-for-14 and quickly accumulating a 24-8 lead. The Spartans appeared resurgent as they scored 10 unanswered and brought the game to within three with a little under four to play in the first half. Despite the rally, NYU answered with seven points to make it 39-34 at the half.

A comeback seemed possible, as the Spartans surged out of the locker room with a three-pointer from senior forward Brian Klements, closing the deficit to 41-40. Unfortunately, the men could not hold onto the momentum and succumbed to 11-4 and 17-5 runs by the Violets.

Following the disappointing loss in New York, the Spartans traveled north and snapped their losing streak with a 71-55 win over Brandeis University, but not without unexpected issue.

Originally scheduled to be played on Sunday, heavy snowfall in the area postponed the game until Monday. Despite the cold, the Spartans were hot, with senior center Connor Edel leading the team with 16 points, tying his career high. The Spartans began with a quick 12-4 run and were up 24-12 with 8:52 left to play in the half. Freshman forward Eric Black scored off a layup to give the Spartans a big 16-point lead before the half.

The Judges were unable to stop a dominant Spartan team as they returned from halftime and extended their lead to a game-high 21 points. The men never looked back, maintaining at least an 11-point lead until the final buzzer.

After an extended road weekend, the Spartans, now 15-7 and 6-5 in the University Athletic Association, are in a tie for second place in the conference and one game behind a three-way tie for first. The Spartans will face one of those first place teams, No. 18 Emory University (Ga.), on Friday, Feb. 20 at 8 p.m. in Adelbert Gymnasium to kick off CWRU’s 10th Annual Throwback Weekend. The throwback weekend continues against the University of Rochester (N.Y.) on Sunday at noon in Adelbert Gymnasium.