One brotherhood: CWRU remembers the lives of the four students lost in plane crash tragedy 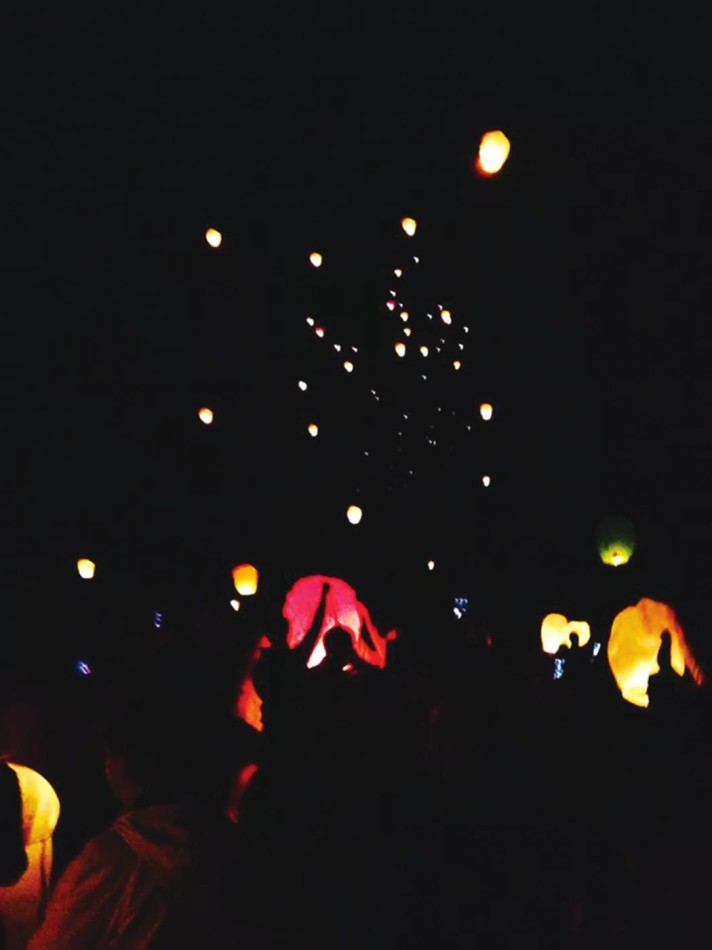 Friends of the late sophomore William Michael Felten release paper lanterns at a service in his honor at his hometown of Saginaw, Michigan.

Sophomores Sid Ghanta and Adam Holets sit in the Zeta Beta Tau house, relaxing after a rush event. It’s the night of the accident. They had both turned down an offer from their best friend, Michael Felten, to go flying.

It was the first time Ghanta had ever said no. They both had jobs with early start times.

Michael talked to Holets the day before about his plans– he thought about flying to Detroit, but then decided it was too far. He eventually settled on flying over Kelly’s Island, a popular vacation spot west of Cleveland.

Michael has four spots on his plane, one for him, and the other two already filled by sophomore Lucas Vincent Marcelli and freshman Abraham Pishevar. He opens the last spot to the others in the house.

“Do you want to go flying?”

Freshman John Hill eagerly throws his hands up. He wants the last spot. After a fight with a friend who also wants the spot, John gets it.

Michael asks how much John weighs. He runs the calculations in his head. They should still be under the maximum load the small plane can carry.

They never make it back from their trip.

On Monday, Aug. 25 around 10 p.m., the rented 1999 Cessna model 172R that Michael was piloting crashed shortly after takeoff in Willoughby Hills, 15 miles northeast of CWRU. The four men were trapped in the aircraft and died from their injuries at the scene.

By the third grade, Michael Felten was all but set in his ways. For a class assignment, his teacher asked him to draw a coat of arms. He drew four drawings, surrounded by a shield: the Chicago Skyline, the Chicago Cub’s logo, a piece of pizza, and a plane.

Chicago was his second city. He loved it like no other place says his friends.

It’s not that he didn’t appreciate his hometown of Saginaw, Michigan. Some of his closest friends were from the city north of Flint. He met his girlfriend of four years there.

Ghanta and Holets emphasized how Michael never wanted to come back to school and leave those friends behind.

They say that Michael loved to rib on Saginaw; he was sarcastic by nature, after all.

Friends would assume he was joking; it was a strange sight to see him be serious.

But that town in Michigan was home.

However, his heart was in Chicago. He was too much like the Windy City. Busy, bustling, even a bit scheming.

He was also highly competitive. He’d take a score against him in any game like a “personal offense” said Holets.

He had grown up visiting the Windy City often, spending many of his summers there. His parents owned a place on Michigan Avenue, at the heart of the midwest giant’s downtown.

Both Ghanta and Holets had visited several times. On those trips, as always, Michael had expensive tastes. The son of a prominent cardiologist, Michael loved eating out and exploring the city.

The three would try all of the pizza places downtown. Surprisingly they only ate the deep-dish variety on several occasions.

Michael loved planning, always setting up every trip. Halfway through his freshman year, he had already found the apartment he would live in junior year.

He had already started buying furniture.

While he was from a privileged upbringing, Ghanta emphasized that Michael never flaunted it. He instead used it to provide opportunities to himself and friends.

Michael was a kid who could never sit still.

“We couldn’t watch a movie with him,” Ghanta said. “He was that bad.”

He was always too busy chasing dreams.

According to witnesses, the four arrive at Cuyahoga County Airport shortly after 9 that night and walk across the ramp towards a tie-down area. One is carrying a suitcase. They then board the four-seat plane and remain on the ramp for about 30 minutes with the engine running.

That was the last time witnesses saw them.

John Hill was a big guy. It wasn’t just his physical stature, but his personality. When he entered a room, you could feel that he was there. He had presence.

“I got used to hearing him, hearing his laugh,” said his RA, Molly Jackson. “It was only eight days, but you get used to things.”

John was confident. He was loud, and he was inappropriately funny.

He was “unabashed and unreserved,” said his roommate, Travis Alexander.

“When we had the intramural sport event at Veale [during orientation week], it was raining, but John and all of our friends still wanted to go anyway,” said his friend, Jodie Hurd. “We all walked in the rain. We got soaked, but afterwards we all just hung out.”

John wanted to try everything. He was rushing Greek life, but he wasn’t fixated on one fraternity. He was just looking forward to the experience.

“He said something to me about ballroom one time,” said Jackson. “I never met a guy who wanted to do ballroom.”

John was always asking about people, always trying to make them feel welcome, always wanting to know how their day was.

“He was the first resident who came up to me on move-in day,” said Jackson. “He came up, and he didn’t ask me questions about moving in or the campus, he just asked me about myself.”

“I remember when I first saw him,” she said. “I thought, he’s a handsome, outgoing guy. This guy is going to be a million kinds of trouble. And he probably would have been.”

John really knew how to fill up a room. Alexander knows that best.

“Since he was my roommate, it’s just very obvious now that that presence is gone.”

Nearly 45 minutes after entering the plane, Michael calls for ground control asking if he can takeoff. He gets clearance, but notes his radio is a little “fuzzy.” The controller repeats what he says.

Four minutes later, the controller tells Michael he is taxiing to the wrong runway.

He apologizes and fixes his course.

With a wrestler’s build, he was often misjudged on first impression.

But once you saw his face crinkling into a smile, you knew this kid had a big heart.

“It took up more than half his face,” emphasized freshman Bessie Bulman, a friend of Abe’s who had met him at an orientation week event.

They had an instant connection and kept running into each other the rest of that day. They hung out that night and had been close since.

One night, Bulman and a friend got lost in a rough part of Cleveland. Abe mapped out where they were based on landmarks and walked out to pick them up.

He cared about everyone he met.

“One of the first things people were talking about was how glowing of a personality he had,” Ryan Currie, his orientation leader said. “You would have absolute trust in him.”

His love for life was contagious. Along with several other floor mates, Abe was the founder of the Tyler house’s “fraternity” Alpha-Alpha-Alpha-Delta-Delta-Delta, a joke gathering of those he just met.

His “brothers” called him Banjo. No one was sure why.

And no one was sure why one night he began to dance, impromptu, alone, with a boombox.

At 11:56 p.m., Michael prepares for takeoff. He says he will be flying east to sightsee, not in the direction of Kelly’s Island. His plans must have changed.

The controller okays takeoff and a right turn.

Lucas Marcelli had a thing about tags. The kind that stick up out of the back of your shirt, angrily defying the natural order of things, refusing to be neat and tucked away like they’re supposed to.

Luke liked things to be neat. He had his life in order, he knew what he wanted, and he knew how to get it. He wanted to be a doctor, he wanted to have a family, children. He wanted to coach wrestling.

Luke liked to tuck his friends’ tags in when they stuck out. His friends like to pull their tags out, just to mess with him.

“We were back at my house after a wrestling tournament,” said his friend and teammate Jeff Gould. “And my mom had made cookies. I tell him they’re ready, and he just turns around, one cookie in his mouth, another in his hand.”

Luke was modest. “Unreasonably modest,” said another friend and teammate David Brunk. He didn’t boast about his achievements. He didn’t dress fancily, he didn’t go out much. He was happy to just spend time with his close friends and his girlfriend.

“He was a simple guy, with big goals,” said Brunk.

Luke never asked for advice. He never needed to. He wasn’t perfect, and he knew it, but he also knew where he was going and how he was going to get there.

Luke had a thing about tags. Now Brunk does too.

“I keep my tag tucked now.”

At 11:58 p.m., just two minutes after radioing for takeoff, Michael tells the controller that his plane was not climbing fast enough, and tries to immediately turn around, a difficult maneuver, even for experienced pilots.

The controller approves the action.

The plane falls as lift is lost.

Moments later, the plane crashes into the ground.

The day after the crash students gathered at a memorial on the ZBT house lawn. Over 600 students attend the event planned that morning. It’s probably the biggest campus gathering in years.

“You join a fraternity and you talk about brotherhood, and you experience it, but you don’t think anything like this would happen,” sophomore ZBT brother Jeff Gould said.

“It really showed the entire school just how strong it was, showed them and also showed us how much we care about each other. That if I ever need anything, I can go to any brother.”

At that memorial, all 600 were brothers.

One campus brought together.