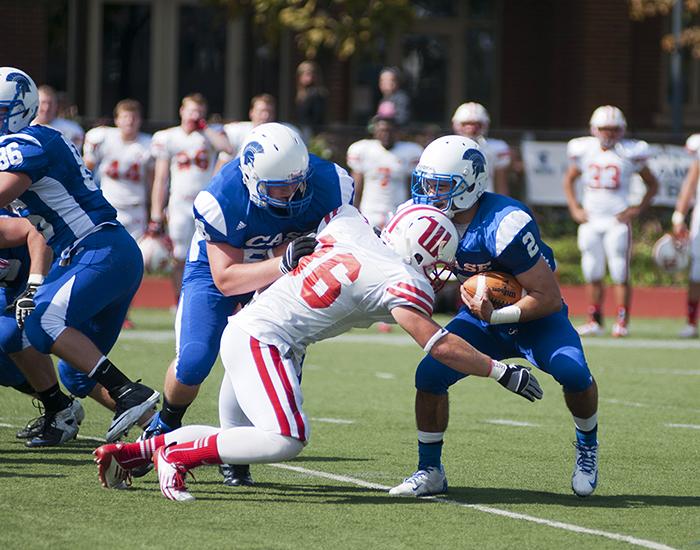 Tomorrow marks the end of an era for the Case Western Reserve University football team. The annual tradition, the Baird Brothers’ Trophy Game, will see its last match as Spartans host the College of Wooster on Saturday, Oct. 6 at Case Field. Case will attempt to snap their first three-game losing streak since 2006 after falling short, 14-10, in an upset bid against the No. 21 nationally-ranked Wittenberg University. The Wooster Fighting Scots have dropped two straight, including a 30-22 defeat at Denison University.

Series Notes:
The Spartans and Fighting Scots have met 24 times on the gridiron with Wooster holding a 13-11 advantage in the all-time series. While Case has won the last five meetings dating back to 2007, Wooster won the previous 10 contests dating back to 1995. The teams have met regularly since 1984, including games in each of the last 10 seasons. Case won the first-ever meeting between the two, 21-14, at Wooster during the 1984 campaign.

The Baird Brothers’ Trophy
The Baird Brothers’ Trophy was introduced during the inaugural meeting between the two schools in 1984 by Bob Baird, an economics professor at Case, and Bill Baird, an economics professor at Wooster. The brothers incorporated their passion for fishing into the rivalry by rewarding the winning team each season with a golden fishing stringer with carved brass fish representing each meeting. Each year, a new fish is added to the stringer with the final score and winner engraved on the side. Bob Baird passed away several years ago, but his brother, Bill, still carries on the tradition by presenting the trophy at the conclusion of the game. The Baird Brothers Trophy was noted in the 1995 issue of Sports Illustrated as one of the most unique trophies in college football.

This year’s meeting with mark the final annual installment of the Baird Brothers’ Trophy as the University Athletic Association and North Coast Athletic Conference football scheduling agreement expires. Wooster will begin playing a complete NCAC round robin schedule, while Case will join the Presidents’ Athletic Conference as an affiliate member in 2014.

The Coaches
Case is coached by Greg Debeljak, who is in his ninth season in 2012 with a 63-26 (.707) record. Debeljak has led the Spartans to four UAA Championships in five years, including three-consecutive undefeated (10-0) regular seasons from 2007-09 with back-to-back NCAA Playoff berths. Since the beginning of the 2007 season, Case has posted an outstanding overall record of 50-9.

Wooster is coached by Mike Schmitz in his 13th season with a 77-49 (.611) overall record. A two-time NCAC Coach of the Year, Schmitz led the Fighting Scots to a perfect regular season (10-0) with the program’s first outright conference title since 1934 and its first ever NCAA Playoff berth in 2004. Also the 2004 National Football Foundation Ohio College Coach of the Year, Schmitz has led the Scots to three 8-2 seasons.

Last Meeting
Then-senior placekicker Daniel Vasil booted a game-winning, 31-yard field goal in overtime as Case defeated Wooster, 24-21, on Oct. 22, 2011 at John P. Papp Stadium in Wooster. Current senior linebacker Wade Self recorded 10 tackles, a sack, and a forced the fumble that set up the winning field goal in OT. Current senior quarterback Erik Olson finished 20 of 31 for 161 yards and a touchdown. Wooster linebacker Quinn Hood led all defenders with 13 tackles and a pair of sacks.

Previous Matchup
Despite a game-high 163 yards from scrimmage by sophomore running back Manny Sicre, Case fell short by a score of 14-10 against the No. 21 nationally-ranked Wittenberg in front of a capacity Homecoming crowd at Case Field.

Spartans to Watch:
Erik Olson, Quarterback – The senior has completed 87 of 138 passes (63.0% completion rate) for 1025 yards with seven touchdowns and six interceptions.

Manny Sicre, Running Back – Sicre has a team-high 424 yards rushing on 107 carries (4.0 yards per carry) with three touchdowns. The junior also has 17 receptions for 241 yards and two scores.

Ryan Ferguson, Outside Linebacker – The defense specialist has recorded a team-high 49 tackles with a forced fumble and three pass breakups. Ferguson, along with fellow senior linebacker Wade Self, has totaled 93 stops with four pass break-ups and a blocked punt.

Fighting Scot to Watch
Richard Barnes, Quarterback – The junior has completed 62 of 116 passes (53.4% completion rate) for 660 yards, six touchdowns while registering three interceptions. Barnes has also carried the ball 53 times for 107 yards and a score.

Jordan McIntyre, Wide Receiver – The senior has team-highs of 17 receptions and 199 yards (49.8 yards per receptions) along with one touchdown.

Mitchell Czerniak, Defensive Back – Czerniak along with junior linebacker Quinn Hood are tied for the team lead with 33 tackles.

STADIUM RECORD
Last week’s Homecoming crowd of 2758 was the largest in Case Field history. Since 2005’s inaugural opening, the stadium’s previous attendance record was 2600, set on Oct. 15, 2005 versus Washington University in Saint Louis.

Prediction: Spartans 24 Wooster 14
The Spartans will look to end their first three-game losing streak since 2006. Case is on a five-game winning streak against Wooster. Look for them to continue their success against the Fighting Scots. Despite the losing streak, the Spartans offense has been consistent and should be able to prevent another last minute letdown.