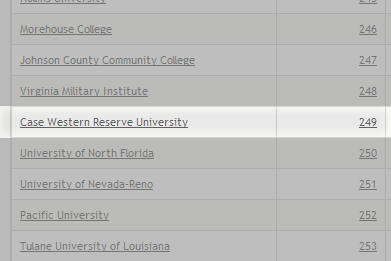 The emails I receive as a newspaper editor are sometimes relevant, usually lengthy, and always entertaining. This past week, as I was navigating press releases announcing everything from apple butter stirring festivals to nursing home trivia contests, an interesting one caught my eye.

The RecyleMania rankings had arrived. If you want to finish reading this editorial now, I’ll cut to the chase: you won’t find The Daily touting these results.

Piggybacking on the March Madness phenomena, RecycleMania brings a different kind of competition to the nation’s college campuses during the spring. The annual eight-weeklong competition began in February, ended in March, and included 523 schools across the United States and Canada this year.

Case Western Reserve University opted to participate in the Competition Division this year, but perhaps we should have called the game on account of rain. CWRU is not ready to compete when it comes to sustainability.

In the Grand Champion category, which ranks a school’s recycling rate as a percentage of its overall waste generation, CWRU came in 249th out of 274 participants in the Competition Division. The university only recycles 13.525 percent of the campus’ waste output, compared to the top recycling school, University of Missouri-Kansas City, which finished with a recycling rate of 86.016 percent.

CWRU frequently proclaims it is sustainable, but these results prove the jury is in and our green reputation is out. And I don’t think it is a difficult task to conclude why.

After all, when I think of the university and sustainability, our fancy trashcans and large windmill are the last items to come to mind.

Instead I think of the television in the Peter B. Lewis Building (PBL) that is always on, even at 3:00 a.m. I think of summer mornings, when the sprinkler system is doing a fantastic job of hydrating a thirsty rock and nothing else. I think of the trash rooms in the Village at 115, where trash bags and recycling bins become indistinguishable by midweek.

As an institution we need to stop pretending we are something we aren’t. When prospective students tour campus, we put forth an image that CWRU puts the environment first, making these results even more embarrassing.

Campus entities that do focus on sustainability, such as the Office for Sustainability and the Student Sustainability Council, are not the problem, however. They are the working solution for a non-green campus.

To have a meaningful presence of sustainability, the university’s administration and major student organizations must become stakeholders. Where do printed publications go to die when their time on campus has passed? Who is responsible for turning off PBL’s TV when no one is watching it? How can waste management in university housing be improved?

These are the questions that must be asked before solutions can be employed. And the only sustainable option is for the university community at large to ask them.

Want to connect with the editor?
Follow him on Twitter @tylerehoffman or drop him a line at observer@case.edu.