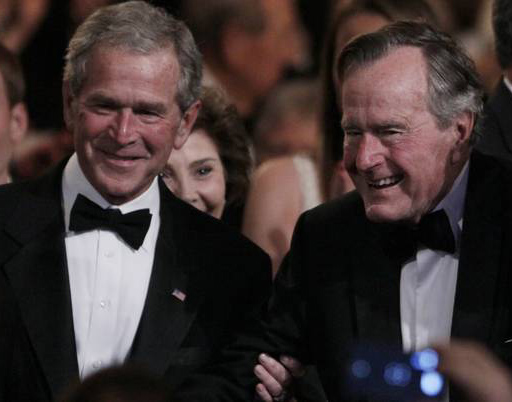 Last week, a report stated that members of the Bush family had been hacked online and gained access to personal messages and photographs.

Last summer, the Boy Scouts of America passed a policy that prevented openly gay individuals from participating in the program. Last week, they announced that they were reconsidering the ban and as of Wednesday, Feb. 6, have announced that they would not make a final decision until May. In 2000, the United States Supreme Court said that the Boy Scouts of America were legally allowed to make this policy. According to the New York Times, the court said that is was an example of “free speech by a private organization [that] would create a new moment of risk, experimentation, and change.”

The proposition that began last week would allow local scouting units to make their own membership rules. The possible change already has opposition. Some ban supporters fear that changing the past policy will cause some conservative church-sponsored troops, which make up about 70% of the organization, to leave the Boy Scouts.

Supporters of the change believe that the policy should state that any openly-gay individual should be able to join any Boy Scout troop. The scout leaders who opposed the banning policy said that even leaving the choice up to the scouting units would allow discrimination of sexual orientation to be tolerated.

The decision to hold off on a decision until May was partially motivated by the extensive feedback of the American public. A statement from the Boy Scouts said, “After careful consideration and extensive dialogue within the scouting family, along with comments from those outside the organization, the volunteer officers of the Boy Scouts of American’s National Executive Board concluded that, due to the complexity of this issue, the organization needs time for a more deliberate review.”

In the 2000 case with the United States Supreme Court, the Boy Scout representatives said, “In a free society, organizations fail or flourish according to the private choices of innumerable families. A society in which each and every organization must be equally diverse is a society which has destroyed diversity.” But Jay Lenrow, a Jewish man who participated in the Boy Scouts in his youth, was disappointed in the Boy Scout’s choice to hold off on a decision until May. He argues that as a child, he spent time with a multitude of different religions, and they would discuss what it was like to be a member of their individual religion and its principles. “What that led to is, first of all, an understanding of what made my friends tick,” said Lenrow. “And, second of all, an appreciation for their feelings and their religious beliefs.”

However, there are others that do not feel the same way as Lenrow. Kelly Williamson, a scout in Texas, wants the Boy Scouts to stick to their original ban. “Do not back off against the principles you’ve had for 100 years,” Williamson said. “Really, this is nothing against the gay community. Have them form their own organization. It’s kind of ironic, gay scouts coming in and saying, ‘We want you to change how you’ve done this for 100 years.’” A national poll, released on Wednesday by Quinnipiac University, revealed that 55 percent of voters were in favor of opening the Boy Scouts to gay and lesbian individuals while 33 percent were opposed.

Life found under the Antarctic Ice

Scientists have found bacteria living deep underneath the Antarctic ice. This discovery could lead to a possible explanation of how life could survive on other planets or moons. It also allows scientists to study the vast ecosystem that is located in Antarctica’s underground lakes. These underground lakes are located in between Antarctica’s actual land and the ice that covers it.

The discovery was made after scientists drilled through half a mile of ice on top of Lake Whillans, which is five-feet deep and about 23 square miles in surface area. What they found were cells that were visible under a microscope and obviously alive. John Priscu, one of the leaders of the expedition, said that the team had done everything possible to prevent contamination of the lake with surface bacteria.

DNA analysis will be done on the bacteria in order to determine what kinds of bacteria were found and how they live. Since there is no sunlight, Priscu said that the organisms must have been using some kind of organic material, possibly from minerals or microbes from glaciers and rocks.

Some scientists, such as Chris McKay from NASA, believe that the discovery on Antarctica could tell scientists something about the possibility of life on other worlds. “If [the bacteria] was using a local energy source, it would be interesting. If it’s just consuming organics carried in from elsewhere, it is of much less interest,” said McKay, “There is not going to be oxygen on other worlds.”

McKay’s explanation of this view is that even though there is evidence of water under ice on other planets, the lack of oxygen means that any sustained life would have to live off of minerals alone.

Until recently, smoking was not only condoned, but actually encouraged in most psychiatric hospitals. The law that required hospitals to condone this behavior was changed in 2012, and by Mar. 30 of this year, smoking is supposed to be banned at both of Louisiana’s mental hospitals.

In previous years, cigarettes were used by these hospitals as incentives for patients to take their medications, follow rules, or attend therapy. A study done by the Centers for Disease Control and Prevention showed that the almost 46 million people who have a mental illness have a smoking rate that is 70 percent higher than individuals without mental illness. It was also shown that these patients use approximately one third of the country’s cigarettes.

Concerns about the health of these patients have caused the reconsideration of allowing smoking in the hospitals. William Riley, chief of the Science of Research and Technology Branch at the National Cancer Institute, said that people with mental illnesses have been found to “smoke heavier, puff longer, and smoke it down to the end of the cigarette.” Schizophrenic patients are more prone to these actions than others.

The hypothesized reason for the popularity of smoking for mental patients may have something to do with the chemicals the brain releases when it meets nicotine. Nicotine has antidepressant effects which can help prevent extraneous thoughts and voices for some schizophrenic individuals. However, some cigarette chemicals can affect the body’s uptake of psychiatric medications, which can decrease the amount of time that the medications work. For others, smoking is just a nice way to relax and forget that they are hallucinating.

Currently, approximately one fifth of state mental hospitals are not smoke free, according to a survey by the State Mental Health Programs Directors Association.  Some hospitals that enacted the ban have had to reinstate it in order to keep their patients. The new ban in March, while angering some patients, will hopefully better their health in a permanent way.

The Bush family was surprised to find that a hacker called “Guccifer” had gained access to six personal e-mail accounts dating from 2009 to 2012. Among those hacked were Dorothy Bush Koch, the daughter of President George H.W. Bush, and Jim Nantz, a friend of the family. The obtained e-mails were posted on the Smoking Gun Website this past Thursday, Feb. 7.

Secret Service spokesman, Ed Donovan, announced Friday that the Secret Service would be leading a full investigation. Bill Bastone, the Smoking Gun’s editor, said that they found the e-mails in an online account. Bastone did not plan to release any more of the e-mails or photographs. Quotes from the hacked e-mails could be seen on the website, some of them involving intimate details of both of the Bush’s lives. Some of the e-mails spoke about planning for George H.W. Bush’s funeral. On a happier note, the emails posted online also showed that George W. Bush has taken up painting.

The Smoking Gun did have contact with the hacker, who mentioned that “the feds” had been investigating him for quite some time. His exact words were, “I have an old game with the [expletive] bastards inside, and this is just another chapter in the game.”