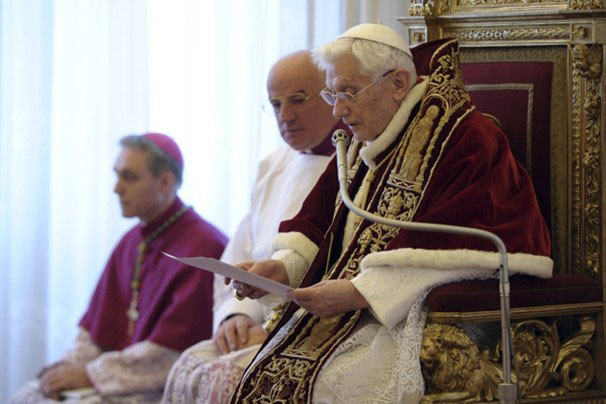 Pope Benedict XVI announced last week that he would be leaving the papacy, the first to do so since Pope Gregory XII.

In Vatican City on Feb. 11, Pope Benedict XVI announced that he would be resigning from his position. His venue was a typical meeting to discuss the canonization of three potential saints. During this meeting, Benedict said, “Before God, I have come to the certainty that my strengths, due to an advanced age, are no longer suited to an adequate exercise.” His official resignation date is Feb. 28. He will be the first pope in six centuries to resign.

The Pope continued his speech saying, “In today’s world, subject to so many rapid changes and shaken by questions of deep relevance for the life of faith, in order to govern the bark of St. Peter and proclaim the gospel, both strength of mind and body are necessary, strength which in the last few months has deteriorated in me to the extent that I have had to recognize my incapacity to adequately fulfill the ministry entrusted to me.”

His Papacy is eighty-five-years-old, and many have noted that he has been looking his age lately. However, his resignation still took everyone by surprise. Most of his followers saw Benedict as conservative and grounded. His resignation was a dramatic move, which Marco Politi, a Vatican expert, hopes will set an example for the future.

Benedicts’ age was the major propelling factor behind his resignation. His brother, Rev. Georg Ratzinger, said that Benedict’s age was taking a toll and that his declining health had him considering his resignation for months. After his resignation, Benedict plans to go to his summer residence in Castel Gandolfo and then to a monastery in Vatican City.

Benedict was elected in April 2005 as the church’s 265th pope. He was the first German to have the title in half a millennium and at seventy-six, was the oldest pope to be elected since 1730. Sandro Magister, a Vatican expert, had this to say about Benedict: “[He] centered his papacy on giving faith to Christians, focusing on the essence of what it means to be a Christian, and he managed to do it in spite of the fact that his communicative capacities weren’t so brilliant.” Magister continued, saying, “Most common people, I don’t mean intellectuals, saw him as a disinterested man who spent all his life for a high cause, which was to revive the faith.”

Oscar Pistorius, a Paralympic runner, has been accused of shooting his girlfriend, Reeva Steenkamp, on Valentine’s Day in their South African home. He is also known as the “Blade Runner” because of his carbon fiber prosthetic legs that allowed him to compete in the London Olympics this past year. Pistorius has been named the official suspect, and he will appear in court on Friday. Police arrived at the house after calls from neighbors who heard the shooting. Other nearby residents said that they had heard other noises early in the morning.

A police spokeswoman reported that there had been other incidents at the house, including “allegations of a domestic nature.” However, no details were given on those previous incidences. In 2009, Pistorius was arrested and accused of common assault for slamming a door. The case was thrown out for lack of evidence. Some media sources say that Pistorius may have thought that Steenkamp was an intruder, but Denise Beukes, another spokeswoman, said that there were no signs of forced entry and that they area of the house was quiet and secure. Pistorius’ spokeswoman Kate Silvers said that he is helping with the investigation and would not comment until matters become clearer.

Steenkamp was 29 years old, three years older than Pistorius. She was remembered by her agency, Capacity Relations, as the “kindest, sweetest human being; an angel on earth and will be sorely missed.” Steenkamp’s father did not blame Pistorius for his daughter’s death. “There is no hatred in our hearts…he must be going through things that we don’t know about,” he said.

The meteor that exploded last week has been the talk of the news for days. It caused large amounts of damage, starting in Siberia where the shock wave from the explosion took the roof of a steel and brick factory off completely. Every top floor window in the city was blown out. Indoors, glass jugs exploded, dishes cracked, and electronics were fried.

Anna Popova, a citizen of Siberia, was at home with her daughter when she saw the flash and heard the explosions. She was surprised to find that her windows were blown in while her neighbors’ weren’t. The random behavior of the destruction concerned Popova. “Who are we supposed to blame for all this?” asked Popova. “Nobody of course.”

Scientists believe that the meteor flew through the atmosphere on Friday morning and held the record for largest space rock to enter the atmosphere since 1908. It injured over 1,200 people and caused unbelievable amounts of property damage. According to scientists at NASA, a meteor of this size only hits the Earth once every one hundred years.

The meteor landed in Chelyabinsk, Russia, who also experienced breaking glass and casualties. The shattering glass occurred because of the pressure waves the meteor emitted when it fragmented. These low-frequency waves are called infrasound. They tend to be stronger in some places than others, and often resonate with glass. Alesksandr Dudorov, director of the theoretical physics department at Chelyabinsk State University, attempted to explain the waves, saying, “A shock wave is like a ball. Throw a ball into a room and it will bounce from one wall to another.”

“A shock wave can be coming from a particular direction, and if you face that direction you are more susceptible,” said Richard Binzel, a professor of planetary sciences at the Massachusetts Institute of Technology. Over 24,000 emergency vehicles were dispatched to inspect some of the more important or dangerous locations that might have been effected, such as hospitals, chemical factories, and a space launching site called Strela.

The Carnival Cruise Ship Triumph arrived on the shores of Mobile, Ala. Thursday night. Its arrival marked the end of a four-day trial that started with an engine-room fire. This fire knocked out the power on the entire ship, leaving over 4,000 people without air conditioning or the use of toilets. An email from Carnival spokesman Vance Gulliksen said that not only does Carnival comply with all the safety standards set by the International Maritime Organization, but their standards and policies frequently exceed these regulations. Gulliksen also stated that Carnival along with outside agencies would conduct a detailed investigation of the accident.

Over the four-day period, toilets started to overflow, accompanied by intense odors and food shortages. Mike Padilla, a man whose wife was celebrating her 40th birthday on the ship, sent a text message that said, “It just hasn’t been the living hell that I’m sure many people will describe. Has it smelled like urine, poop, and rotting food? Yes, at times it has.”

In response to the accident, Carnival cancelled fourteen scheduled voyages of the Triumph. The company also provided all of the affected passengers with a full refund and discounts for future cruises. Additionally, the travel costs from Mobile to Texas, where the cruise started, are being covered by Carnival. “As far as what they’re offering the consumer, I think it’s fair,” said David Crooks, Senior Vice President of Product and Operations at cruise agency World Travel Holdings. “I’m not sure what more they can do.”

However, questions are being raised about cruise ship safety after this latest incident. The first incident occurred about a year ago, when the Costa Concordia, a Miami-based Carnival cruise ship shipwrecked in Italy, killing 32 people. The most recent incident occurred about ten months ago when the Costa Allegra, another Miami-based Carnival cruise ship had an engine-room fire that thankfully did not cause any injuries, but did leave the ship stranded in the middle of the Indian Ocean.
“What this does is raise a question about operational procedures and safety procedures,” said Douglas Quinby, senior director of research at PhoCusWright, a travel industry research firm, “This may spur some additional and perhaps needed engagement within Carnival.”

Mississippi lawmakers have finally ratified the 13th Amendment, which was originally instated in 1865. This amendment abolished slavery in the United States under the presidency of Abraham Lincoln.

Dr. Ranjan Batra, a University of Mississippi Medical Center professor, saw the recent film, “Lincoln,” and decided to look into what happened after the states voted on the amendment.

He discovered that Mississippi had originally rejected the slavery ban, but in 1995 the state legislature finally voted to approve it. The decision cleared both legislative chambers, but was never sent to the Office of the Federal Register and never became official.

With his findings, Batra contacted Ken Sullivan, a Mississippi resident, who got in touch with Secretary of State Delbert Hosemann. Hosemann’s office took immediate action and made the ratification official on Feb. 7. The most recent state before Mississippi to approve the ratification was Kentucky in 1976.