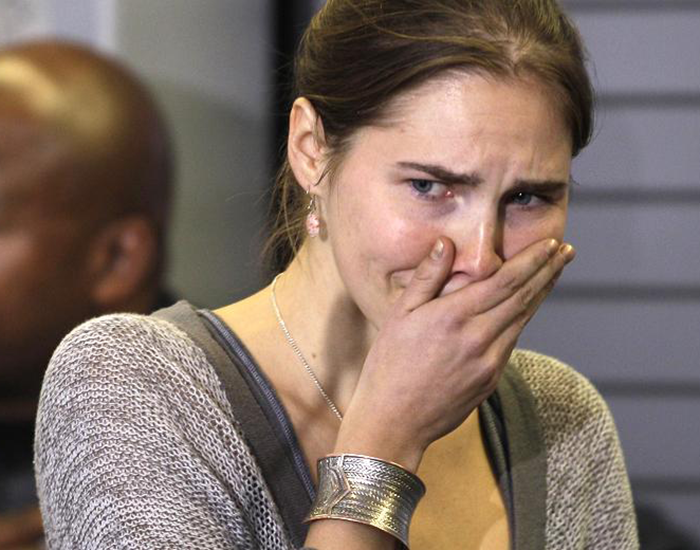 Amanda Knox reacts to returning home to the United States in 2011. Accused of killing her roommate in Italy, Knox’s was acquitted by Italy’s final court of appeal after serving four years of her 25 year sentence. Italian courts have ordered a retrial. She will be tried in absentia if she does not return to the country.

In 2007, American student Amanda Knox, who was studying in Italy, and her boyfriend Raffaele Sollecito, were accused of killing Knox’s roommate, Meredith Kercher. Two years later, they were convicted. In 2011, the convictions were overturned on the ground of lack of evidence and motivation. Prosecutors challenged the acquittals of Knox and Sollecito, which was allowed by the Italian law that grants two levels of appeal.

According to his lawyer, Guilia Buongiorno, Sollecito is unlikely to be jailed again in the retrial. Knox does not need to be present for the new trial, but if she is convicted, Italy could lodge a request for Knox’s extradition by the United States Government. Carlo dalla Vedova, one of Knox’s lawyers, said, “Amanda is very sad at this news but is strong and ready to fight on. She thought the nightmare was over, but was ready for this after the discussion in the Supreme Court went on longer than predicted. This means further harassment, but she’s ready to fight.”

The Groundhog Day celebration takes place in Punxsutawney, Penn. every year. This year, however, Ohio’s Butler County Prosecutor, Mike Gmoser, filed a criminal indictment against Pennsylvania’s famous groundhog, Phil, over his “prediction” of an early spring. Gmoser was upset when snow began to fall during the week the groundhog had “predicted” spring to start.

Bill Deeley, president of the Punxsutawney Groundhog Club’s Inner Circle, said that Phil the groundhog had actually predicted six more weeks of winter, but Deeley had failed to announce this correct information. Last week when the “prediction” was made, Gmoser commented that “Punxsutawney Phil purposely, and with prior calculation and design, caused the people to believe that spring would come early.” However, Gmoser dropped the charge on Tuesday, when he found out that the groundhog’s handler was taking the blame. “Truly, I have really serious work to do in Butler County. Let’s end it on a high note.”

Killarney, a town in southern Ireland, gathered a lot of attention this past winter when its local council apparently voted to legalize driving drunk. However, this information was not entirely correct. The Kerry County Council did pass a motion that called for people who live in country areas to be allowed a few beers before they drove home.

Danny Healy-Rae, a local pub owner and politician, was the first person to propose this motion. His goal was to combat the decrease in pub culture and the isolation of rural life. According to The New York Times, Healy-Rae’s exact wishes were “to issue permits to people living in rural isolated areas to allow them to drive home from their nearest pub after having two or three drinks on little-used roads driving at very low speeds.”

Upon talking to some of the inhabitants of the Healy-Rae family pub, it was found that most individuals approved of this new motion. One pub-goer said that the pub was “a great excuse to get out of the house.” He continued, “I wouldn’t drink every day or anything like that, but it does give me a lift to have a couple of pints and maybe bump into friends and hear what’s happening in the world.” This pub-goer currently relies on a neighbor to take him to and from the pub.

Healy-Rae’s motion passed, and since then, his family pub has been host to film crews from all over Europe. “I am not advocating on behalf of the kind of individuals who cause accidents on our roads,” said Healy-Rae, “I am talking about mainly elderly people who live in very remote places who come to town to get a bit of shopping, enjoy a couple of pints and a chat with friends then drive home at less than 30 miles per hour.”

Toireasa Ferris, another Kerry County Council member, was not pleased about the motions’ passing. “Never in my wildest imaginations did I think it ever would be passed. This is not the way to address this problem. Some in an older generation who were used to having a few pints and driving home may still think it acceptable…But we have to break the link between socializing and drinking for the generations following.”

Mystery of Duffy’s cut beginning to be uncovered

In the early 1800s, a cholera epidemic wiped out dozens of Irish immigrants who came to the United States. A small wooded area called Duffy’s Cut in Malvern, Penn. became a mass grave for those young immigrants. Over the past decade, multitudes of professors, students, scientists, and landscapers have excavated the soil in Duffy’s Cut. Their goal was to unearth the bodies and, according to The New York Times, give them historical context and ship them home to be buried in consecrated soil.

The story of the Irish immigrants began in June 1832, when the ship, John Stamp, docked in Philadelphia, Penn. The youngest member on the ship was believed to be 18-year-old John Ruddy. Other members of the ship’s crew bore the names Devine, McIlheaney, and Skelton. The crew’s job was to dig through the clay and shale of the land in order to level the ground for a train line. However, later in the summer, an outbreak of cholera occurred, most likely being spread through a contaminated creek that ran past the men’s living quarters.

After the outbreak began, the immigrants were shunned by most of the local community, with the exception of a few Sisters of Charity. When the outbreak finally ended, eight men were dead, and their living quarters had been burned down and buried. In 1909, a mid-level rail official names Martin Clement, erected a granite-block enclosure around Duffy’s Cut, but was forbidden to put an explanatory plaque beside the monument.

In 2002, a man named Bill Watson and his brother Frank, were going through some of their family’s old belongings. They discovered that their grandfather was the executive assistant to Clement, who eventually became the president of the Pennsylvania Railroad. Clement had kept an extensive file on Duffy’s Cut that indicated that at least 57 people had died as opposed to eight. “Something was off. It made us dig deeper,” said Watson.

Working with a number of colleagues, the Watsons created a rough grid of the Duffy’s Cut site. Then, in August 2004, they began to dig with the help of a few college students. It took over a year to find anything buried from the living quarters. In Nov. 2005, Watson found the bowl of a clay pipe that was covered with shamrocks and a small harp. “That for us was the holy grail. It meant this wasn’t just an urban myth.”

A geophysicist, Tim Bechtel, was then recruited to the project. Using ground-penetrating radar and electrical imaging, Bechtel was able to scan the ground and detect “anomalies.” In March 2009, two of the male college students discovered a tibia, and the findings continued from there. The bones that were found were examined by Janet Monge, a physical anthropologist, and Matt Patterson, a local dentist with forensic odontology training.

Monge and Patterson indicated that the bone fragments found were indicative of a muscular man in his late teens. This teen had never developed an upper right first molar, which Patterson said was very rare. Additionally, markings indicated that this teen’s skull had evidence of blunt-force trauma, meaning that someone had hit him on the head.

The next two years resulted in six more sets of remains, along with iron forks, pottery shards, handmade glass buttons, pieces of other clay pipes, and coffin nails. These nails indicated that some of the immigrants had been buried before the cholera epidemic was through. Blunt force trauma was found in three of the six remains sets found in addition to a bullet hole. These discoveries, along with new accounts, indicate the possibility that the immigrants were forced into quarantine and were killed when they tried to escape. “I actually think it was a massacre,” said Monge. Excavations will continue until the true history of Duffy’s Cut is revealed.

On Monday, the United States military announced that it would sign an agreement with South Korea that discussed how to counter vexations from North Korea. The agreement states that the United States would deal with “local clashes and skirmishes,” such as the shelling of an island in 2010 which killed four South Koreans.

Different possible provocations were considered, and South Korean-American responses were drafted to combat each of proposed provocation. For now, the agreement is considered to be led by South Korea and is simply supported by the United States. Recently, South Korea has commented that if they are provoked, they will not only deal with the provocation, but will also go after North Korea’s supporting forces and its commanding post.

According to The New York Times, a joint statement from the United States and South Korea said that, “By completing this plan, we improved our combined readiness posture to allow us to immediately and decisively respond to any North Korean provocation.” The agreement was signed by the top American commander in South Korea, General James D. Thurman, and chairman of the Joint Chiefs of Staff of the South Korean military, General Jung Seung-jo.