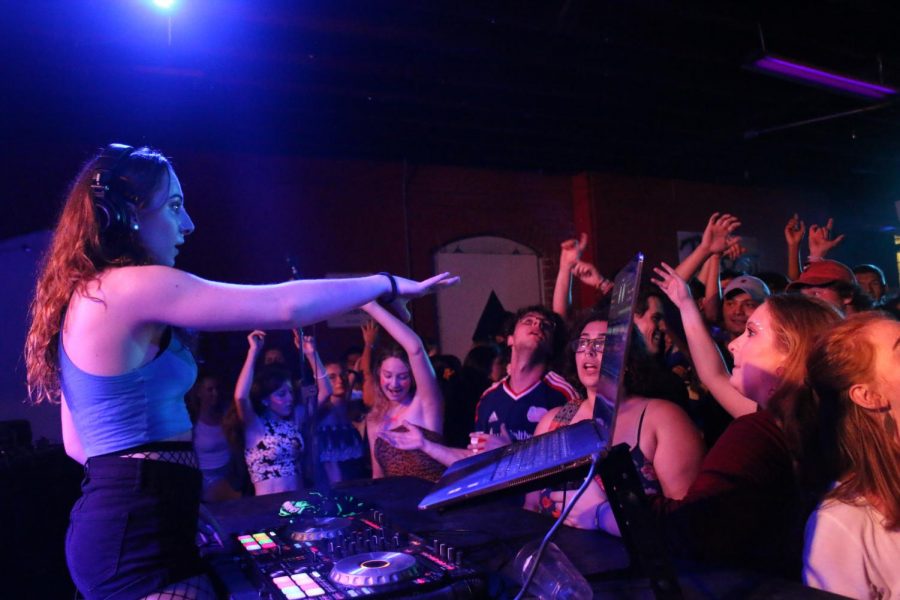 DJ Denver hypes up the crowd

Monitors sat like gargoyles, obliterating the airwaves on both sides of the raised stage, throne to the curators of the colossal sound. A flurry of chromatic lights speckled the walls like comets, creating a cosmic atmosphere that blasted off the stellar performances.

The vibrations at Owl Fest on Sept. 14 were contagious—nobody was spared from the epidemic of action on the dancefloor. It is hard to imagine that this mosh of over one-hundred bodies, wall-to-wall, was an empty early-century carriage house just a few hours earlier.

Despite the Case Western Reserve University Police Department security arriving an hour and a half late, and imperceptibly minor technical difficulties backstage, everyone jammed into the Outpost Saturday night enjoyed a wonderful soundscape provided free of charge by Phi Gamma Delta fraternity (Fiji). This is the third annual Owl Fest, Fiji’s first concert of the year intended “for the community” that they use to infuse rave culture into the Case Western Reserve University bubble.

Every year, Fiji works to encourage a healthy mode of celebration and attract students to the other two philanthropic events that complete their yearly cycle of concerts—Howl Fest in the fall and Islander Fest in the spring, which raise money, through admission, to the Pancreatic Cancer Action Network (PanCAN) in memorial of Hugh Marshall, a Fiji alumnus who was diagnosed with late stage pancreatic cancer.

The brothers, who were on their fifth iteration of a Fiji-fest, were in charge of operating the event. Some of the equipment was even handmade with Fiji labor. Jigsaw wielding third-year student Johnathan Sequeira constructed the stage. Evan Davies and Matt Hartmann conceived and constructed a home-made subwoofer, a hidden part of their sound force that sat subtly in the corner.

“It’s just simple electronics,” said Hartmann, who would later transform into his DJ persona Dr. H. He explained that during the summer months, the venue for the show, dubbed the Outpost, serves as a storage space for the fraternity.

They had about a week to move in the stage, the speakers, the lights and all of the cords.

“We have to get all of that out of here first, then we do rush events, then we can setup,” said Hartmann. “But it’s pretty easy with four people.”

The only elements not provided by Fiji were a light set loaned by the CWRU Footlighters to add to those already operated by third-year student Jared Jacknow, who doubles as drummer for the fully-Fiji band Sticky, lead by singer and fourth-year student Nick “Sticky-Nicky” Charles. After a bit of sound-testing, Hartmann set the stage for excitement with a double-kickflip.

Last-minute prep included moving the skateboard off the dancefloor. At 10 p.m., people started pouring in. The first set was the debut of Dr. H. He featured bass music, a style of electronica that builds harmonic and melodic elements from a foundation of heavy bass lines, hence the need for a custom subwoofer colossus. He drew in the crowd with decibels that dominated the airwaves a block away in every direction. Forty-five minutes in, the room was overflowing. Inside, waves of heads bounced to the music and chanted “AY, AY, AY!”

Exhausted from fist-pumping, a few filed out to cool off in the open air while DJ Denvver set up, swapping in her own digital turn-tables. The crowd waited anxiously, whooping and hollering. Denvver, the alter-ego of third-year student Devon Garrett, got her start as a disk jockey after she attended the first Owl Fest in 2017 and thought, “Wow, I can do that.”

Her career exploded with performances at numerous Greek-life events, including Alpha Phi’s Festival Phiver just earlier that day, and she has been a mainstay at Fiji’s events ever since.

Denvver picked up right where Dr. H left off. The intensity only increased as the night drove on. Wicked dubstep in the first half led to infectious house music that put the event into overdrive. The crowd could not help themselves—groups dancing on stage had to be shooed off constantly. Nothing could be done to stop first-year student Matt Stevens from crowd surfing. Denvver herself leapt atop a bass amplifier for an exuberant climax. Denvver credited her fans, saying, “That was probably one of the most hyped crowds I had ever played for.”

The laser-shooting electronica spaceship had landed, and the listeners were welcomed back to Earth with a performance from the band that originated in the brick house just across the gravel parking lot.

Sticky, frontlined by Charles, with second-year student Mac Craffey and third-year student Conor Clark on guitar, was supported by third-year bassist Matt Pukansky and Jacknow. The band has come a long way since their formation this past year. They rehearse three-to-four times a week and record on the weekends.

The group hopes to release an original work in the coming months. For their set, they planned a mixture of home-grown songs with covers that would pique the interest of new listeners. Their rendition of “Pumped Up Kicks” was highly stylized with each of the musician’s unique tendencies, representing their diverse musical backgrounds.