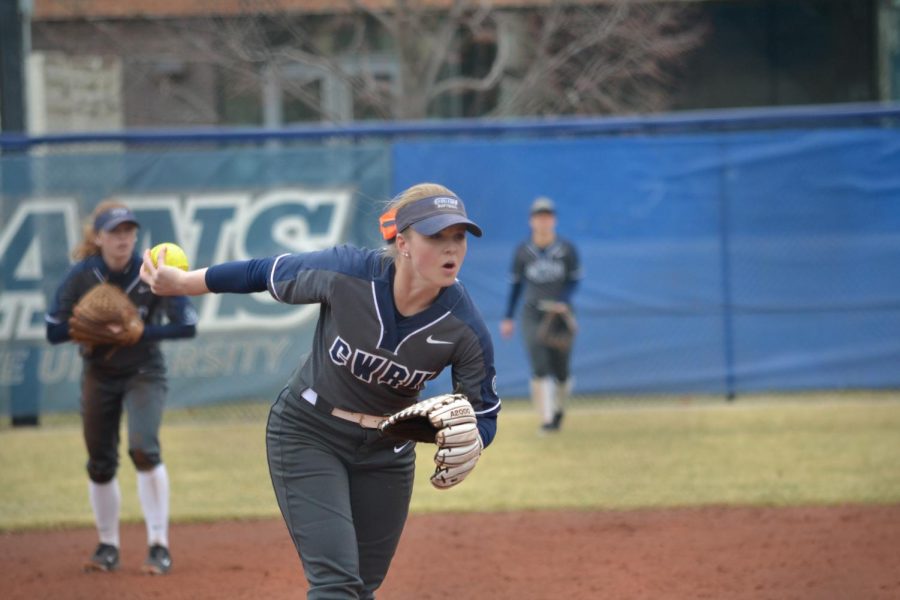 Third-year Ilissa Hamilton prepares a pitch. The Spartans have gone 7-1 against four teams from Northeast Ohio.

Cleveland-area schools have proven to be no match for the Case Western Reserve University softball team.

In the past week and a half, the Spartans have gone 7-1 against four teams from Northeast Ohio.

To begin regional play, CWRU went 1-1 against Baldwin Wallace University. They lost the first game 5-4 in extra innings, but they came back and subsequently defeated the Yellow Jackets 14-4 in five innings. In the loss, first-year player Liv Thomas and second-year catcher Dusstyn Reynolds each hit home runs. Reynolds launched another home run in the win, and this time was joined by fourth-year shortstop Nicole Doyle, her first home run of the year.

The Spartans’ bats stayed hot on Saturday, March 23 against Kenyon College, quickly defeating the Ladies in both games, 13-2 and 14-6. Third-year first baseman Nicole Carty had herself a day, specifically in the first matchup. She went 4-for-4 from the plate, including a double and a home run, and drove in three runs. Carty could not be stopped in the second game either, going 3-for-4 from the plate and scoring two runs, while also pitching a complete game. Doyle had a tremendous game as well, recording five RBIs.

On March 24, the University of Mount Union didn’t stand a much better chance.

The Spartans beat the Purple Raiders in both games of the doubleheader, scoring nine runs in each contest and holding Mount Union to one total run. Third-year pitcher Ilissa Hamilton pitched a complete game shutout to begin the day. Hamilton only gave up two hits and struck out two. Reynolds went 2-for-3 from the plate with a home run, a double and four RBIs. Second-year pitcher Sidney Brannam started and finished the second game, allowing one run in six innings. Carty again dominated at the plate, going 4-for-4 in the game, including a two-run home run that ended the game because of the mercy rule.

Against John Carroll University (JCU), the streak continued with two more victories. The first game was a 6-4 win for the Spartans in which CWRU launched five home runs. Hamilton pitched the entire contest and picked up another win, bringing her record to 5-2 this season. She also contributed at the plate, hitting one of the home runs. The Spartans soundly defeated JCU in the second matchup, 10-0 in five innings. Hamilton hit another home run to pace CWRU offensively.

CWRU will begin University Athletic Association competition on March 29 and 30 at home against New York University. The doubleheader starts at 2 p.m. on Friday and 1 p.m. on Saturday.