A mesmerizing animation of the imagination 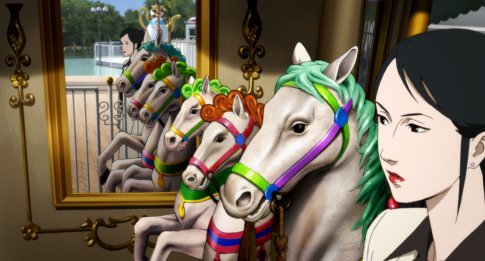 "Paprika" tells a trippy tale of entering dreams, and served as the inspiration for "Inception."

Whether it has spouted from our associations from childhood or the oft-targeted audience of younger generations, animation in film has long sought validation as a viable medium for adults.

This can be especially true for Japanese animation, which has colloquially held a stigma here in the U.S. for introducing themes revolving around the weird and nonsensical. American studios such as Pixar, Dreamworks and Disney Animation have performed tremendous accomplishments by putting forth material that can be enjoyed by all ages. However, how often are these “cartoons” specifically created to deal with mature themes on par with some of the most critically-received Hollywood blockbusters?

Enter “Paprika,” a twisted mosaic of future-shock oddities and experimental trips through the human psyche. This film turns a blind eye to the dissatisfaction of reality and releases the floodgates of imagination to commentate on our most wonderful, yet fleeting moments: dreams.

Directed by the late Satoshi Kon (“Millennium Actress,” “Tokyo Godfathers”) and based on the novel by Japanese author Yasutaka Tsutsui, “Paprika” centers on the brilliant man-child Dr. Kosaku Tokita’s (Toru Furuya) latest creation, the DC Mini, an experimental therapy device that allows the user to enter into the dreams of patients. There is little doubt that the device demonstrates unparalleled potential; however, due to its unfinished nature, the DC Mini does not contain access restrictions, leaving it open for anyone at any time to enter another person’s dream.

When lead protagonists, stoic Dr. Atsuko Chiba (Megumi Hayashibara) and mischievous Dr. Torataro Shima (Katsunosuke Hori) discover the possibility of a missing prototype and, more importantly, a chronically-absent colleague, strange occurrences start to pop up all around them. This prompts a deliberate search in hopes of preventing any serious complications from arising.

Joining the manhunt is Toshimi Konakawa, a less keen Sam Spade, who finds himself initially troubled by a recurring nightmare shown to be related to the homicide case he is working on during the day. Demonstrating an unusual aversion to the cinema and consistently experiencing a bleeding of his dreams into his reality, Konakawa finds himself in positions where the separation between fact and fiction is hardly distinguishable, often producing scenarios ready and able to rival Spike Jonze in his “Being John Malkovich” meta-game.

To put it succinctly, the film is intricate. It’s a stunning bombardment of iridescent hallucinations, charmingly demented visuals and an infectious techno-pop score. Amidst the controlled chaos, a sinister underbelly pervades and produces an understanding that our materialistic obsession is slowly extracting our fantasies to replace our realities and disconnect ourselves from one another.

Consistently, themes include escaping isolation, admitting skepticism and questioning perception all in hopes of returning to the logical coherence of what is considered to be normal actuality. Add in the hyper-realistic 2D drawing style and the consistently unnerving banter regarding the assumed differentiating facets of physical bodies and machines, and “Paprika” delivers a surreal and addicting mania guaranteed to raise a few eyebrows by the end of your viewing.

Those familiar with Christopher Nolan’s “Inception” (which was inspired by this film) or Spike Jonze’s “Being John Malkovich” are encouraged to seek out Satoshi Kon’s “Paprika.” Fans of Mamoru Oshii’s “Ghost in the Shell” or Katsuhiro Otomo’s “Akira” should also give “Paprika” a chance.