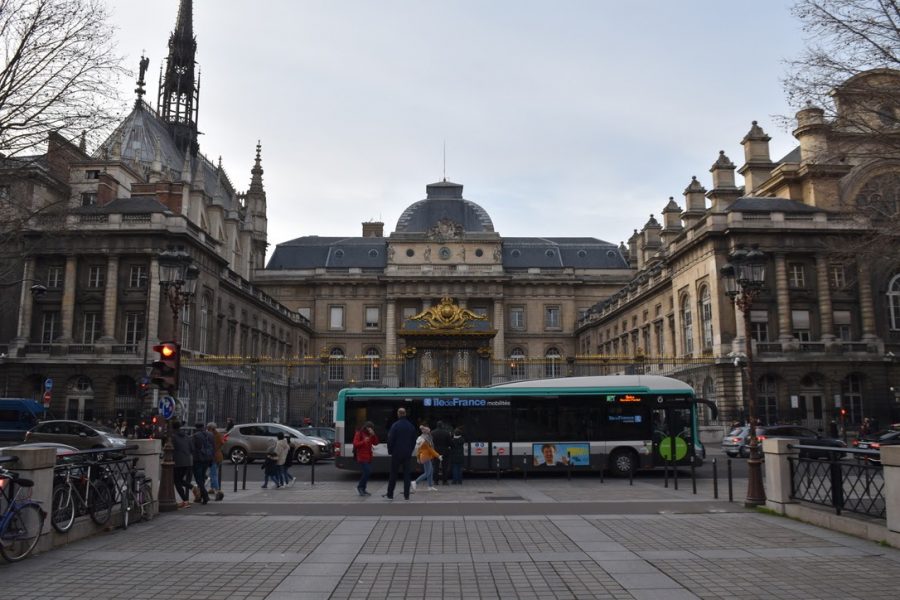 RATP Bus 21 Passes in Front of Palais de Justice de Paris. The lack of trains from the strike has left Parisian busses crowded and running off schedule as the system grapples with the longest metro strike in french history.

In 20 years of teaching courses in Paris, Ruth Mulhauser Professor and Chair of the Department of Modern Languages and Literatures Cheryl Toman never faced a transit strike like the one currently crippling the French capital. Toman has been taking students to the City of Lights for years, and this past winter break was no exception—she led 15 Case Western Reserve University students through the city and its suburbs in her class FRCH/WLIT 335: Immigration and The Paris Experience.

But, where the course normally would have relied on the city’s highly efficient and low cost metro system, this year planning was significantly more difficult and almost entirely subject to the daily whims of a transit system in open revolt against the French government.

“The French people historically are known for their strikes and strong labor unions,” Toman explained. “But the strikes started Dec. 5, 2019 and with still no end in sight, have surprised everyone.”

At this point, the French transit strike has become an international story. The strike is the longest of its kind in France since the 1960s, and it centers around government-proposed pension reform—an incredibly hot-button issue in a country with a proud history of socialized and fully funded retirement programs.

The legislation proposed by the Macron-led government is designed to tackle the more problematic side of the French pension system—the cost. France spends almost 14 percent of its Gross Domestic Product on pension spending and currently employs 42 separate retirement programs—an approach that is complicated and expensive.

In November of last year, the French Prime Minister, Édouard Philippe, delivered a report warning that the pension deficit might be as high as 17.2 billion euros (19.1 billion dollars) by 2025. On Dec. 5, unions across the country went on strike in opposition to the reforms the government officially proposed on Dec. 12.

Earlier in December, Toman was only mildly concerned, but by the time students started to arrive and there were still no trains to board, the situation changed.

“‘Paris as a classroom’ [turns out to be a] challenging concept without the public transportation system that Parisians rely on so heavily.” Toman said. “The transit strike had a domino effect: cars and taxis weren’t the answer [and] students spent 5-6 hours a day just getting to and from the class.”

One particularly harsh example came on a 50-minute bus ride covering a route the class would have traditionally traveled in half the time on a train. The strikers in Paris still enjoy popular support, but on board the busses and trains conditions are less than pleasant—at one point the bus had to stop and demand that a pregnant woman be allowed a space on the bus, after other angry passengers had been loudly denying her.

“Stuffing oneself into an already severely overcrowded bus or train” Toman noted, “is not for the faint of heart.”

For students, the lack of a transit system was inconvenient but manageable, especially given the context.

“As inconvenient as the strike was, there was comfort in the fact that all Parisians had been dealing with this stuff for over a month,” third-year international relations student John Garcia explained.

Toman’s ability to change plans on the fly saved the class, Garcia explained. Garcia didn’t even mind that he and his friends did have to “watch trams skip our stations and leave us stranded, with no real alternative but to Uber somewhere,” he said.

One fun upside to the whole dilemma came in the form of a transit option that Paris and Cleveland both have a bunch of—electric scooters. The city is full of them, and, with limited options, industry leader Lime had reported a 500 percent increase in signups well before any of the CWRU students had arrived.

With angry drivers stuck in traffic for days and cobblestone streets throughout the ancient city, they may not have been the safest option—but the scooters got people where they needed to go, and nobody reported any scooting injuries.

Still, one might expect to see the picture of a Spin scooter on the next study abroad health and safety powerpoint.