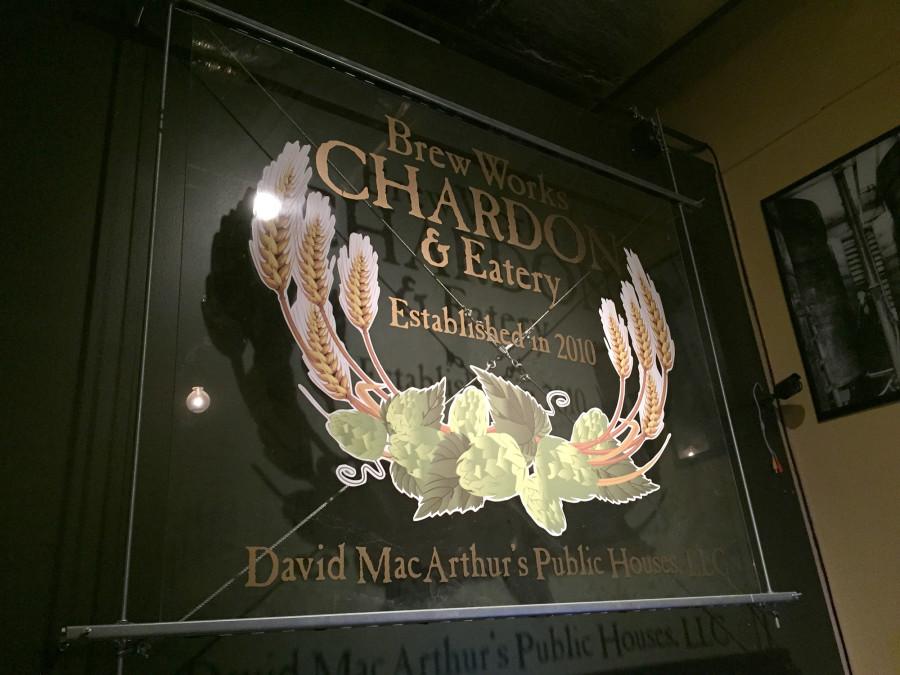 BrewWorks brings back the old-timey feel of family-owned businesses in the form of a brewery.

If you ever wanted to experience well-balanced, drinkable beers at a “Mom & Pop’s” brewery, then venture out to Chardon.

On a cold winter night, I drove far out east to the “snowbelt” capital of the world. Located within a shopping plaza was this hidden gem of a brewery: the Chardon BrewWorks & Eatery. The brewery first opened in 2010 in Chardon Square then moved to its bigger and better-designed space in 2014.

Upon entering one immediately notices old beer memorabilia and some Chardon historical pieces adorning the walls. Clearly, this is a brewery for locals who want to warm up with a beer or two.

I was greeted by Riley Neer, bartending behind a large wooden bar. Giant mugs and growlers hung from hooks above, while Flogging Molly played in the background.

Owners Michael and Donna Nedrow could not be present for this review. However, Michael talked me through my beer tasting experience via phone.

Of course, I started with the beer that started it all, the Donna Do Ya Wanna. Back in 1995, Mike first began brewing on his stovetop and decided to name his first creation after his wife, Donna. This brew is a light hefeweizen at 4.6 percent Alcohol by volume (ABV) and 11 International bittering units (IBU). I could taste and smell a very yeast-filled flavor with hints of banana.

Following this beer was the Pride of Geauga (P.O.G.) Maple Porter, named after the famous Cleveland beer, Pride of Cleveland (P.O.C.), from the historic Pilsener Brewing Co. Made with Chardon’s famous maple syrup, this beer has a nice maple finish, yet a strong alcohol presence, which makes the beer both sweet and strong. The maple syrup is left to ferment in the brewery before being used to make the 7.2 percent ABV and 25 IBU beer. With the clear Geauga and Chardon ties and of course great taste, there is no question why this is the top-selling beer for Chardon BrewWorks.

Closing out the original four beers Nedrow first brewed were the Working Man Pale Ale and the Ironworker India Pale Ale (IPA), both equally as popular as the Donna Do Ya Wanna and the P.O.G. The Working Man won a silver medal at the National Homebrewing competition in 2009. This 5.5 percent ABV and 41 IBU Extra Special Bitter (ESB) beer was not as bitter as most beers of its kind and actually pretty smooth.

The Ironworker IPA is one of the most popular beers sold at the brewery and was popular amongst the patrons playing cards behind me. This IPA is named after Michael’s father, who was an ironworker himself. Like the Working Man, it is smooth despite being a style of beer that often is not. Despite the lack of hoppy flavor, this beer is brewed with galaxy, centennial and amarillo hops. At 6.8 percent ABV and 63 IBU’s, this beer reminded me more of an American Pale Ale (APA) as opposed to an IPA.

Taking a break from the beer, I learned more about Michael and Donna. Michael is a pilot by trade (hence, why he was unavailable at the time), and Donna is a nurse. Together they started homebrewing in 1994. This dynamic duo wanted to further enrich the town they love, Chardon, by opening the first brewery, under the principle of making “drinkable” beers that everyone would enjoy.

The next set is the rotational seasonal beers, which are not always on draft as the four flagship beers are. The Muzzy Cream Ale was the best cream ale I have ever had. Cream ale is one of two types of beer created in the United States. (The other is steam ale.) Seeing that the only other cream ale I have ever had is the Genesee Cream Ale, my expectations for cream ales are rather low. The 4.7 percent ABV and 16 IBU beer had a delicious cream finish that was not overbearing or headache-inducing like the Genny Cream. Cream ales are difficult to brew, because they are so simple that any mistake made in the brewing process is clearly identifiable. The name Muzzy comes from a 1980s Chardon slang for stoners: a random name for an exceptional beer.

The White House Honey Ale was the weakest in flavor and taste out of the beers I sampled. Nedrow explained that the recipe he used is taken from when the Obama Administration chose to use the official White House honey to brew beer. The 4.1percent ABV and 30 IBU beer has a simple honey taste but is not particularly memorable.

My favorite beer of the evening was the Queen Isabella Hazelnut Brown Ale, which was brewed by assistant brewmaster, Mike Cerimele. The beer had a creamy finish with a clear hazelnut taste which gives the beer a “latte” taste to it. I was surprised to find that this beer was considered an “imperial” brown ale and had a relatively high ABV of 6.5 percent.

Closing out the beer samples, the Hopominable Snowmaster IPA was a standard double IPA. This winter warmer had an 8.1 percent ABV and a whopping 109 IBU’s, which reminded me of Great Lakes’ Chillwave. On the nitro tap was the Chocolate Pomegranate Milk Stout. This fruity and reddish milk stout was a nice surprise for the end of the samples. Nedrow’s daughter was enjoying chocolate and pomegranate juice one evening, and this inspired the creation of this beer.

The food was usual bar food and paired well with the beer. The Maple Porter wings were made with the P.O.G. beer and had a nice spicy and sweet taste, but paled in comparison to most wings in Cleveland. The beer cheese soup made with the Working Man beer was also enjoyable but not as memorable as the beer. Chardon BrewWorks is clearly a place to try homemade, local beer with food on the side.

If you like beer and tons of snow, Chardon BrewWorks is a great place to check out to get the full “Mom & Pop’s” brewery experience.