Pass the suds… from Nanobrew 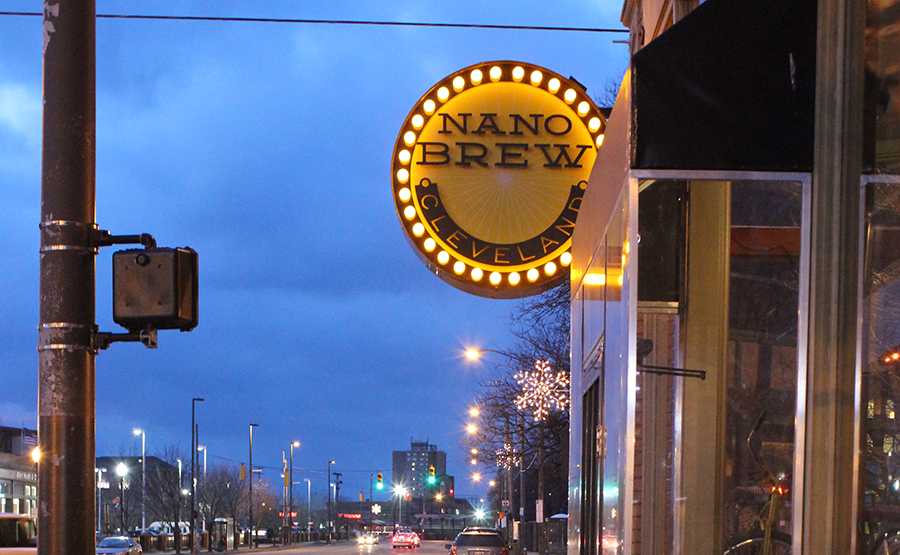 A golden marquee illuminated a dark, dreary, winter night in Ohio City. Bright yellow bulbs haloed “Nano Brew Cleveland” outside of what looked to be a bike shop. Antique bicycles adorned the front window space. With a smile, I entered in search of good beer.

Nano Brew Cleveland offers Clevelanders a rustic, turn-of-the-century, midwestern vibe, with more of a “rusty” flair to the décor due to the metal or “rusty” items in the brewpub. Besides the metal bicycles in the window, there is a metal, spiral staircase in the back that leads up to the one-barrel brew kettle. Nano is a rather small brewery, hence the name.

What is particularly special about Nano is that it has immersed itself with the surrounding neighborhood. Ohio City is a very bicyclist populated area. Instead of creating a brewery that is unaware of its neighbors, Nano embraces them. There are bicycles racks outside and a tune-up station provided by the Cleveland staple, Joy Machines Bike Shop, which resides across the street.

Details and thought are put into everything inside Nano. Adorning the wall at each table is a beautiful black-and-white photo of a Cleveland landmark. Even though Nano has several guest beers, the tap handles—silver, like old bike handles—unify the décor. The large chalkboard on either side of the bar provides more flair in art and design of each guest beer. Nano Brew Cleveland is owned by Cleveland beer enthusiast Sam McNulty, who also runs Market Garden Brewery.

Nano had three in-house brewed beers. The first I tried was the Nano #Kolsch, a very light and refreshing beer with a strong wheat aftertaste. The drink was almost transparent. It had an American resemblance, similar to most American domestics, but did not have the low quality wheat aftertaste most have. Instead, the wheat flavor added to the experience and this ended up being my favorite beer of the three.

Next was the Nano Occasional Draeger, which had a light hop flavor after the first sip, but like the #Kolsch, had a strong aftertaste. This time, it was a big hoppy flavor. The hop flavor may have been strong, but it was still very smooth and not too dry.

To round out the three was the Nano Bullwinkle Bitter IPA. The beer had intense hoppy and dry flavors that caught me off guard at first. This drink was particularly enjoyable as I drank it under a large moose head, which of course I named Bullwinkle. This beer was a perfect accompaniment to my meal.

The daily double of the day was a gigantic, double-patty burger with cheddar, guacamole, tomatoes, red onion and the best part, bacon jam. The bacon jam was smooth, salty and filled my mouth with this godly food. The guacamole was subtle but delicious and soaked the patties with the cheese. This was one of the largest burgers I have ever had and I had to cut it in half to properly attack it. The waffle fries were some of the best I have ever had. They were large, crispy and golden yellow. Perfect for dipping into large amounts of ketchup.

I decided to try two non-Nano beers while I dined. I sampled Market Garden’s Trouble IPA on cask, but it tasted more bitter on cask than it does at Market Garden. Due to the lack of carbonation, I was able to taste all the multi-flavors of this beer, especially the honey flavors, which were especially prominent.

Nano also has two different Radler concoctions; these are beer and soda combined. It’s a rather brilliant idea because it allows one to drink beer and constantly remained hydrated. The name “Radler” translates to “Cyclist,” due to the sport’s popularity with athletes in Germany. I thought this was the perfect fit to a brewery dedicated to cyclists.

I also tried the Fixie, which was North Coast Brewing Company’s Scrimshaw Pilsner with grapefruit soda. This drink was incredibly refreshing and tasty. The grapefruit perfectly companioned the pilsner. I plan to make these concoctions over the summer for porch drinking.

Even though I ordered the most expensive item on the menu, my meal only cost $12 and clearly could have been split between two people. Even though the brewery only has three to four of its own beers on draft at any time, the wide selection of Market Garden and guest beers are enormous, with 24 different beers to choose from. If you ever go shopping at the West Side Market on a Saturday afternoon and want a quick burger and beer in Ohio City, then this is the perfect spot to check out!