Pass the suds… From Portside Distillery and Brewery 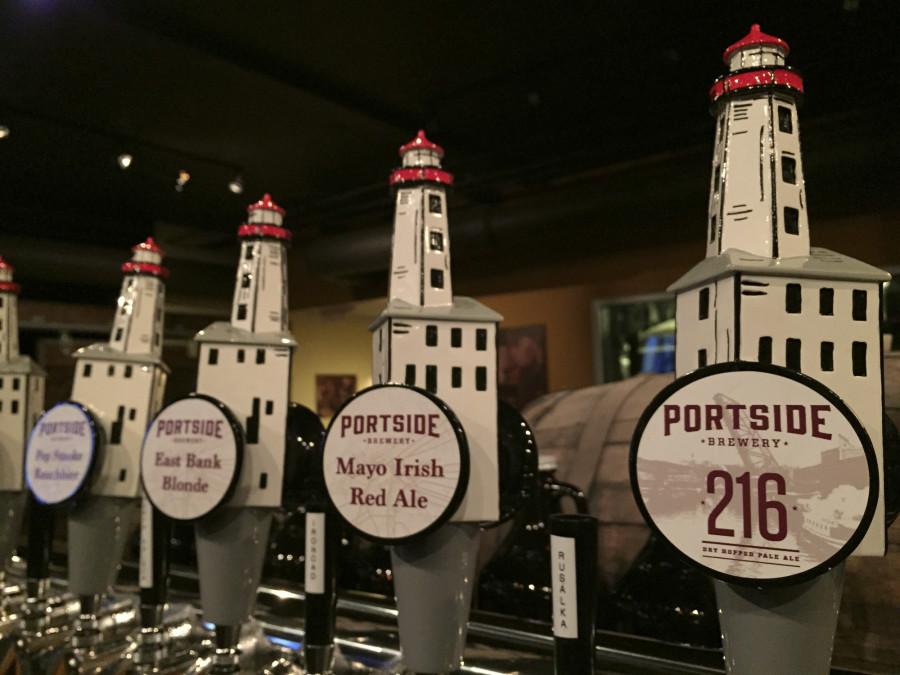 Portside features a variety of beers and also a menu of mixed drinks, combining unlikely flavors into unique cocktails.

Imagine crispy, juicy, succulent bacon. Got it sizzling in your mind? Now imagine cool and refreshing beer. Mmmm. Now imagine the two together as one.

My life was forever changed when this dream became a reality after sampling a bacon-flavored beer at Portside Distillery and Brewery.

Near the banks of Lake Erie lies one of Cleveland’s new tasting rooms and the first distillery since prohibition. Portside first opened its taps in April 2013 with a portable draft system and picnic tables for seating. Since then they have expanded, and their brews can be found at bars around Cleveland and on the shelves at Heinen’s and other local craft beer stores. The tasting room opened on Jan. 17 of this year and still has that brand-new smell amongst the malt and hops aroma from on-site brewing operations.

Upon entering I was immediately greeted by the very congenial Marketing Coordinator, Lauren McPherson, who served me Portside’s flagship beer, 216. This Pale Ale is brewed with Centennial, Apollo and one of my favorite hops, Mosaic, which leads to a refreshing beer that is perfect for any flagship brew. This golden-colored beer can easily be found at bars around Cleveland and will be served at Progressive Field in time for Opening Day.

Dan Malz, brew master and founder of Portside, enthusiastically shared more samples of his beer. The Pop Smoke Rauchbier is brewed with cherry wood smoked malt and is lovingly known as “The Bacon Beer.” Malz explained that he was not trying to make a beer that tasted like bacon, but using smoked malt, this 5.5 percent Alcohol By Volume (ABV) beer simply tastes like fresh bacon. As I savored each sip of this truly original beer, I yearned for breakfast and dreamt of drinking this beer during a Sunday brunch.

Furthering the theme of “alcoholic, drinkable edibles,” the Bismarck Chocolate Baltic Porter tasted like a liquid chocolate bar. This rich, smooth porter is brewed with tons of roasted barley, chocolate malt and, of course, Belgian chocolate. At a surprising 8.2 percent ABV, this beer can really sneak up on you.

The Bourbon Barrel Aged 216 was even better than the original. I found it to be less hoppy, with the right balance of bourbon taste. At the same price as the 216, I was impressed by the value.

Malz showcased the brewery and distillery, which is a seven-barrel system with a whopping 14 different draft lines.

Portside specializes in rum, which Malz explained is America’s original spirit of choice. The process to distill rum is only three weeks, which allows Malz and his team to constantly be providing new batches of five varieties of rum to thirsty patrons.

Among the craft beer, Portside offers plenty of craft cocktails. The What the Yolk was made with Portside’s Vanilla Maple Rum, egg yolk and ginger beer. This unique take on a cocktail standard had a creamy vanilla taste and was a bright yellow color.

The Toasted Stout was made with Portsides’ Rusalka Vanilla Stout, Frangelico and Portside’s Vanilla Maple Rum. I was hesitant to try beer and rum together, but after a few sips of this innovative beverage, clearly beer and rum should be friends for life. This cocktail was bit stronger and reminded me of an espresso drink. Portside uses fresh maple syrup from Oberlin Farms in Geauga County for this rum not only because it tastes great, but also to support local industries.

One of my favorite Portside brews is the Big Chuck, named after the Cleveland celebrity and befitting of its 11.7 percent ABV. Malz explained that Big Chuck and his lifelong friend and T.V. partner Lil’ John frequent the tasting room and were there at its grand opening.

The tasting room offers $5 off growler fills on Wednesday. Most growlers are only $15. This means that at only $10, this is easily one of the best and cheapest beer to-go deals in Cleveland.

Malz hopes to continue to grow Portside and hopefully one day open an off-site production facility to continue to meet the demand for his original and simply delicious brews.