Pass the suds… from the Church Brew Works 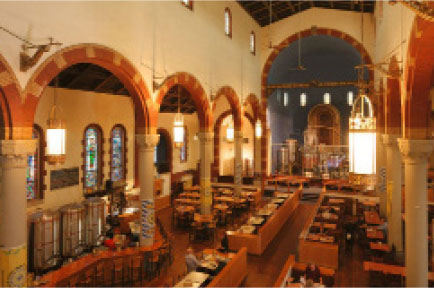 Fermenters rest in the altar of a restored Roman Catholic church at the Church Brew Works in Pittsburgh, Pa.

While many Case Western students took trips to tropical areas for spring break, I traveled to the exotic Pittsburgh, Pa. Here stood one of the most original breweries I have ever experienced, The Church Brew Works.
In 1996, the former St. John the Baptist Church was converted to this award-winning brewpub. The church was abandoned for several years when owner Sean Casey pitched his idea for a brewery to the church, which was happy to see the space used as long as it still maintained the church’s integrity.

I pulled up to the large gothic church. One cannot help but to be awed upon entering this cathedral of beer, with old church pews lining the dining room. A long, wooden bar snaked across the side and surrounded the six brew kettles, lurking beneath an old church organ at the top of the balcony.

The altar has been replaced with a large brewing system, golden and shiny like the Ark of the Covenant, and stained glass windows of various saints peer down at the brew kettles.

The food was diverse and affordable. My craving for exotic food was quenched when I ordered the Wild Boar Cassoulet, a French dish containing white beans, vegetables, whole grain mustard and, of course, wild boar.

The boar was spicy, tangy and resembled pulled pork. The mustard brought just enough additional spice to really liven up the dish, but the real gem was the pile of crispy, red sun-dried tomato chips.

Next up: the four seasonal beers. The Imperial Irish Red Ale was a refreshing, flavorful red ale. Despite beer’s dehydrating nature, my thirst was quenched after drinking it. The Cornelius Ale was a darker ale than the Irish Red and still had a decent taste of hops despite its dark appearance.

The Renegade Black IPA was even darker than the previous beers and had an even more hoppy taste, but again, the hops were not overbearing. The most balanced beer in terms of hops and color was the Thunderhop IPA, an exceptional IPA that had just the right level of hops. Like the Celestial Gold, the beer was a bright yellow color that shined when held up to the stained glass windows.

The Church Brew Works also has a constantly rotating stout, aptly named the Rotating Stout. The brewmasters constantly change the recipe for their stout, which was currently dark and heavy, yet with a pleasant aftertaste. It was a nice change from all the ales I had been drinking.

As I enjoyed my lunch, I continued to soak in the atmosphere. I noticed that each handle was a different color and at the top was a bright yellow sun. Hand-woven flags slung around the church, reminiscent of Amasa Stone Chapel.

In all, if you do not mind driving out to Pittsburgh, The Church Brew Works is a different kind of brewery experience at a very affordable cost.