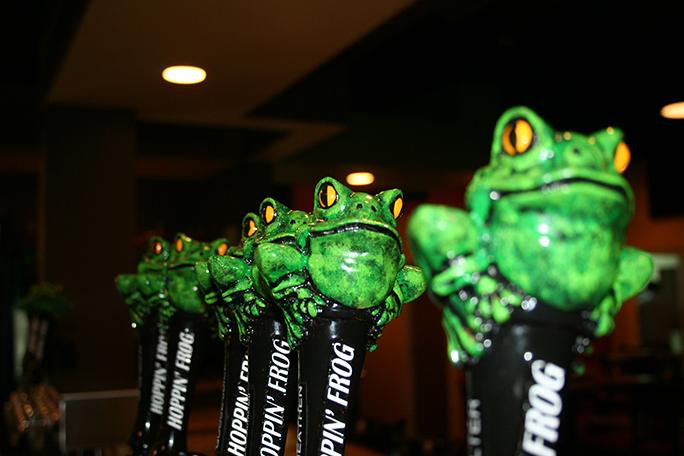 Taps from Thirsty Dog Brewing Company and Hopping Frog Brewery, although all the same, feature beers across the brewing spectrum.

Akron, Ohio was once known as the “Rubber Capital of the World” because the four major tire companies, Goodrich Corporation, Goodyear Tire and Rubber Company, Firestone Tire and Rubber Company and General Tire, all had their headquarters there. This city southeast of Cleveland is also where the fictional Pickles family from Rugrats were originally from and the birthplace of a former Cleveland celebrity who left to pursue interests in South Beach, Florida.

However, many are unaware that Akron is also home to two of the best breweries in Ohio. Thirsty Dog Brewing Company and Hoppin’ Frog are both nationally recognized breweries and quite unique and different not only from each other, but also from the other breweries I have reviewed.

Among the several brick buildings near the University of Akron lies a small building with a sign that has the image of a dog with a beer mug in its mouth. As I entered the building from the side entrance, I stepped over several large hoses that led to the main production brewery. I smiled at my reflection in the large brew kettle and walked around the corner to the tiny taproom.

This cash-only taproom had several barrels of beer lining it and tons of beer memorabilia. Thirsty Dog keeps the taproom simple and traditional by only providing beer and popcorn served in a dog bowl.

I asked for a sample of each of their 12 beers on tap. Each sample at Thirsty Dog was only $1 and pints were $4, thus making this the most affordable brewery I have traveled to.

I started with the spring seasonal, the Citra Dog. This beer has a strong citrus and dry hoppy taste, resembling more of an IPA than a fruit beer, which is misleading from its name.

Next was the Twisted Kilt, which was a smooth and sweet scotch ale. It had the perfect blend of sweetness and scotch taste, downplaying the taste of scotch and preventing it from being too sweet like a Dopplebock.

The Cerberus was one of my favorite beers at this brewery. It was a Belgian Triple clocking in at 10 percent alcohol by volume and 31 international bittering units. Despite having a high ABV, it was still flavorful and sweet, and still had a kick to it, but was shockingly palatable. The aroma of this well-made beer was a pleasant combination of honey and hops.

The Maibark was a light Helles Bock, which was smooth but not memorable. Similarly, the Labrador was also a light and drinkable beer. This lager, however, is much better than any standard American domestic and would be great to drink on a porch in the summer while petting a labrador.

The Raspberry Ale was an excellent fruit beer. This beer was not too sweet and had a raspberry taste and smell throughout. I found this fruit beer to be much better than Lindeman’s Framboise, which I always find to be too sweet. The Irish Setter Red was also a beautiful red color like the Raspberry, but was smooth. I found it to have the perfect level of malt and hops.

The Hoppy Spring Ale was delicious and had a floral taste and smell, which harkened the weather perfectly. The ale was not too dry or bitter, much different than the Session IPA, which was both. The Session IPA was a traditional IPA with the level of hoppy flavor, but still was drinkable.

My least favorite beer from Thirsty Dog was the Bernese, which was a barleywine brewed with various fruits. I could not identify any of the fruits in particular and instead it had a mixed fruit flavor, which just made it too sweet. This beer was also brewed with raisins and dates, but I was unable to identify those by the taste.

Like any good beer sampler, I finished my tasting with the stout and the porter on draft. The Rise of the Mayan Dog was a rich and dark stout with strong tastes of coffee and chocolate, but also had a smoky taste to it. I felt like I was smoking a cigar as I drank this incredibly original beer. The most recognizable Thirsty Dog beer, the Old Leghumper, was similar to the stout as a lot of porters are, but the flavor wasn’t as strong as the Mayan Dog. It also had even more of a smoky aftertaste.

Across from the Lockheed Martin plant in Akron lies a warehouse with a large frog on it. The less than one-year-old tasting room at Hoppin’ Frog was packed on a Wednesday evening. I can only imagine the traffic the tasting room gets on the weekends.

The tasting room was simple with yellow walls, a few tables and a large bar with green frogs on top of the handles.

The menu was unbelievably extensive. Besides having 14 different beers on draft, Hoppin’ Frog has a collection of their signature 22 oz. bottles, which can get rather pricey. The most expensive bottle was $68, which was the Barrel Aged Naked Evil, a Belgian and barley wine style ale from 2011.

One of the unique components of Hoppin’ Frog is they will bourbon barrel age their signature beers. This brings out the flavors of bourbon as well as the beer, but also greatly increases the price of the beer. Five oz. samples of some of the barrel-aged beer were over $4, making this brewery by far the most expensive.

I decided to first try the four bourbon barrel-aged beers. The Barrel-Aged Turbo Shandy was simply unbelievable. It had a huge citrus and whiskey taste, filling my mouth with every sip. I have never had a beer that tasted like a perfect whiskey sour. The beer was a bright yellow color, which glowed under the bar lights.

The Barrel-Aged Outta Kilter Scotch Red was unlike the Shandy; it mainly had a bourbon taste and the actual beer taste was not as present. I found the bourbon taste to be a bit overpowering and it tasted liked I was drinking straight alcohol.

The Barrel-Aged B.O.R.I.S. the Crusher was simply one of the best beers I have ever had. The aroma of bourbon and coffee filled my nose and my taste buds with each sip. This beer was jet black in color, even when I held it up to the bar lights. I was astonished by this because I had never seen such a dark beer before. As I twirled the beer around in its glass, it did not leave “lacing” around the glass like most beers, but instead left traces of bourbon all around.

My friend and I decided to take a break from the beer and order food. The customer service was remarkable. Both the bartenders and the servers were congenial and knowledgeable about Hoppin’ Frog’s food and beer.

I ordered the Karminator Kuban, which had melted Gouda cheese, pickle chips and their own mustard sauce made with their beer, the Karminator Doppelbock, all on crispy ciabatta bread. The pan-seared pork tenderloin was juicy and cooked to perfection. The black forest ham and bacon were perfect additions to the meat-filled sandwich. I also had the quinoa salad, which had apricots, walnuts and coconut flakes mixed and further sweetened with coconut milk.

Head Chef and Hoppin’ Frog enthusiast Shawn Sweeney visited us at our table to ask how we liked our food and talked with us about upcoming food specials he plans to have.

Sweeney explained that he intends to have a few different dishes from around the world each week, and was exceptionally excited about his upcoming French week. Throughout our time there, Sweeney continued to check in on us and told us more about the food and beer at Hoppin’ Frog.

After taking a break from beer, it was time to dive back in. The B.O.R.I.S. the Crusher Imperial Stout was equally as fantastic as the barrel-aged one. It had a rich oatmeal and coffee taste and was also dark. With a 9.4 percent ABV this beer had an incredible warming effect.

The Turbo Shandy Ale was also equally different and enjoyable to its barrel-aged brother. It has a huge citrus and sour taste and was by far the best shandy I have ever had. This is the perfect summer beer and is far better than the summer favorite, Leinie’s Summer Shandy. The Café Silk Porter was a good porter, but tasted more like a watered-down version of the stouts. It had tastes of chocolate and coffee, which were not as present in flavor as they were in the stouts. The Hop Heathen Imperial Black IPA had floral and dark flavors and was rather drinkable compared to the incredibly strong beers at the brewery.

I was not a big fan of the Karminator or the Hop Dam. The Karminator was an incredibly sweet Doppelbock. It had tastes of caramel and toffee and was a beautiful cherry color, but this was far too sweet and was almost undrinkable. Similarly, the Hop Dam was the hoppiest beer I have ever had and my mouth puckered with each sip. I had to chase this beer with water due to the extreme hop, dry and bitter flavor.

What makes Hoppin’ Frog unique to all breweries is it pushes the style of its beers to the extreme. The IPA’s are the hoppiest, the Doppelbock the sweetest and the stouts are the strongest. This is original, unique and an amazing experience, but it is hard to rate any of these beers as drinkable. It would be challenging to have more than one pint of any of these.

With that being said, despite the tasting room being less than one year old, it has been rated the best tasting room in Ohio. I can honestly agree with this. With the food, beer and customer service, Hoppin’ Frog was one of the best brewery experiences I have had.

An important note I would like to make is the reason why the beer is more expensive than any other brewery is because it is by far the strongest in ABV. The lowest ABV was still a high 6.2 percent ABV. I experienced this brewery with a friend and we stayed in the tasting room for several hours before we returned back to Cleveland. I highly recommend this brewery, and more importantly, experiencing this brewery with several friends.