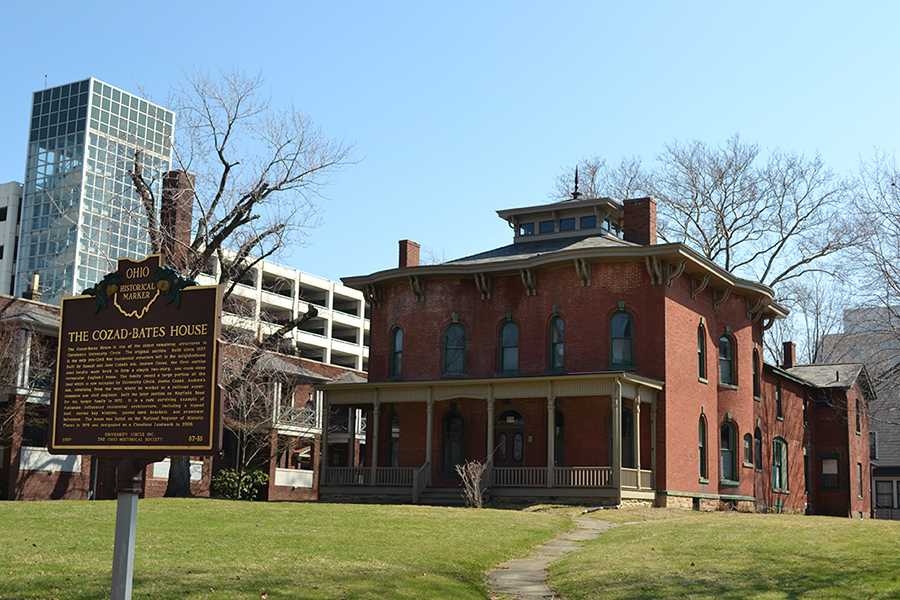 The oldest standing building in University Circle has been vacant for years. On April 12, sound will consume the Cozad-Bates House on Mayfield Rd. as an audio exhibition at MOCA.

Sitting patiently on the intersection of East 115 St. and Mayfield Rd. is a 161-year-old testament to history, equality and freedom. The Cozad-Bates House is University Circle’s oldest and only pre-Civil War structure and once aided several slaves in obtaining freedom. The final destination for many slaves was Canada, and the last stop in Ohio’s 250-mile Underground Railroad was Cleveland, which was, at the time, known by a secret codename: Hope.

The house was constructed by the Cozad family, who were, like many others in University Circle (formerly in the East Cleveland township), dedicated abolitionists and proponents for racial equality.

Other than its involvement in the Underground Railroad, the mansion is notable for being a rare survivor of Italianate-influenced architecture, which includes characteristics such as a prominent belvedere, curved bay windows and a hipped roof.

It was recently designated as a Cleveland landmark in 2006 and was listed on the National Register of Historic Places in 1974. The house has been vacant for seven years due to renovation efforts.

Interest in the house has recently peaked, allowing it to once again become a central element of University Circle. One of those who have taken interest in the house is artist Kevin Beasley, who is, according to the Museum of Contemporary Art (MOCA) Cleveland, returning this spring to grace the city with his talents.

Since 2011, Beasley has been heavily involved in creating a series of live audio performances. He is bringing these sound environments to MOCA Cleveland and incorporating the Cozad-Bates house in a sound installation that integrates the newest and oldest buildings in University Circle.

His newly commissioned work for MOCA Cleveland is titled “And in My Dream I Was Rolling on the Floor.” MOCA Cleveland states, “Beasley’s sound work will consider the architecture, history and the condition of the bodies that move(d) through the house and the Museum.”

Two curators of a 2013 MOCA Cleveland exhibition in which Beasley was featured, “Realization is Better than Anticipation,” were extremely impressed by his abilities and wanted a new sound piece from him. This led to his current exhibition.

Director of Programs and Associate Curator Megan Lykins Reich says, “Kevin is an exciting young artist who is really advancing contemporary sound work, both conceptually and technically. We are so thrilled to bring him Cleveland to produce a new piece that engages our environment directly.”

Additionally, Assistant Curator Rose Bouthillier sees the unique setting as ideal and adds, “The Cozad-Bates house just seemed like the perfect fit for Kevin, as his work so often deals with history, change and their material weight. It’s an incredible environment for sound, and this will also be a rare opportunity for our audience to see inside this house, which adds a very deep layer of history to University Circle.”