Patel: Why Thanksgiving has to change 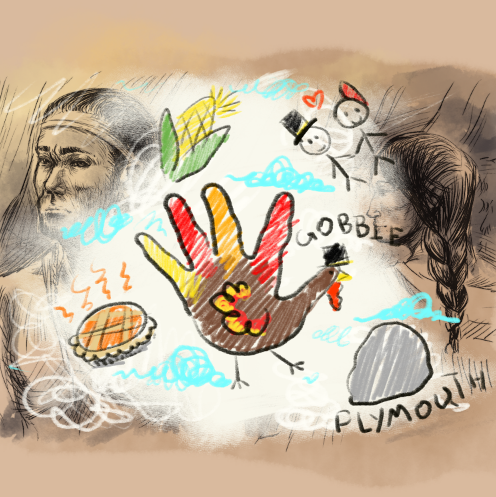 December has finally arrived. Students have just spent their Thanksgiving break with their loved ones, enjoying a holiday that is celebrated across the country. Turkey was carved and cranberry sauce was eaten, while discussion of politics were looked down upon.

Thanksgiving, however, has hypocritical origins and perpetuates the continued abuse of indigenous people. The Pilgrims mistreated the Native Americans before the the first Thanksgiving was celebrated, and this attitude toward indigenous peoples has continued through the centuries up to today. With the current situation regarding the Dakota Access Pipeline and Standing Rock Reservation, the way we celebrate Thanksgiving has to change.

First, we need to fully understand the true origins of Thanksgiving. As children, we are taught that it started off with the Pilgrims and Native Americans coming together to celebrate a successful farming season and to pray for survival through the winter. Both parties were thankful for each other, and promises of a long standing tradition were made.

There was a Thanksgiving day and there was a Squanto, but he was a former slave. There was a celebration, but it is a lot darker than what we were taught in school. When the Pilgrims first landed on Plymouth Rock in 1620, they were unprepared for their new lives. They did not know how to farm, hunt or survive in the American climate. The first winter came and they were on death’s door. The struggle of these pilgrims was witnessed by the native tribe, the Wampanoag. The Wampanoag were ruled by Chief Massasoit who saw an opportunity to form a connection with the Pilgrims by helping them. They taught them how to hunt, farm and live successful lives in the New World.

Despite the overwhelming amount of help they received from the Wampanoag, the Pilgrims did not see the indigenous people as their equals. Under Massasoit, they had made a deal to honor the Wampanoag land and not settle into it. Despite this, the Pilgrims did not respect their words and expanded into Wampanoag territory. It’s estimated that around 90 percent of the Natives in New England had also passed away from disease brought by the Pilgrims. Their numbers were low and European settlers saw this as a way to move into their land.

When Massasoit passed away, his son Metacom took over as leader of the Wampanoag and initiated the First Indian War, or King Philip’s War, over their land. This was the Wampanoags’ last chance to stand against the invasion. Unfortunately they lost and Metacom surrendered his homeland. With his back turned, he was shot and murdered. His son—who was nine—and wife were sold into slavery. His head was mounted on a stick and brought back to Plymouth Rock where the Pilgrims celebrated Thanksgiving.

Currently, the indigenous people in North Dakota are facing oppression on their own land again. The United States government has approved the building of a pipeline that will go through the burial grounds of the indigenous people and potentially damage communities. To these indigenous people, burial grounds and the earth they live on are very important to their religion. This pipeline, the Dakota Access Pipeline will carry 470,000 barrels of oil daily.  Protesters have gathered at the Standing Rock Reservation in order to prevent the pipeline from completing construction, using the hashtag #NoDAPL to update those around the world of the situation.

These protesters claim that the completed construction of the pipeline will impact Native Americans culturally, economically and environmentally, but the construction itself poses legal issues. The Native American tribes and their land are considered sovereign nations. Specifically in North Dakota, the Treaty of Fort Laramie was signed declaring that the land designated as reservation land was theirs and theirs only. Therefore, the Dakota Access Pipeline legally cannot go through their land without their permission.

Moreover, the National Historic Preservation Act requires federal agencies to make sure that the land they are building governmental structures on is not sacred or culturally significant. To some in North Dakota, the land the pipeline runs through is sacred. This pipeline will also run through the water sources these tribes utilize daily and has the potential to contaminate them. Oil pollution creates damage that is long standing and can persist for decades. With global warming on the rise and this past July recorded as the hottest month ever, the construction of this pipeline is only aggravating the current environmental crisis we are going through. Indigenous people across the world have protested these environmental atrocities, and this pipeline is no exception.

Thanksgiving has originated from injustices against indigenous people. With the current protests in North Dakota, this holiday and its celebration are a slap in the face to those who are still fighting. We do not have to completely stop Thanksgiving, but we should understand its true origins and acknowledge the struggles that Native Americans in this country still face. We can meet up with family and eat our turkey, but we have to do something to acknowledge the suffering that is a direct result of the birth of our nation. Across a lot of the country, some have stopped celebrating Columbus Day, opting to call it Indigenous Peoples’ Day. Thanksgiving should follow a similar change. It can still be a holiday, but with a different celebration focusing on honoring Native Americans and the struggles they have faced.