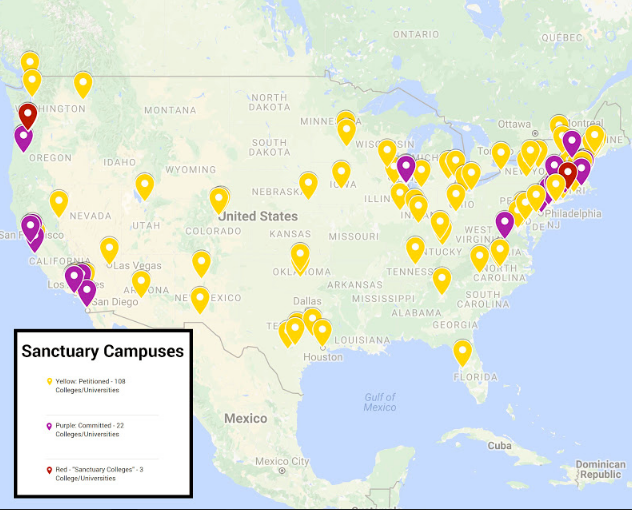 The bitterly-contested, vitriolic presidential election of 2016 has brought a hyperfocus on social issues that have had profound influence on the nation. One of them—specifically the question of illegal immigration—has raised concerns on the Case Western Reserve University campus.

President-elect Donald Trump has pledged, since the beginning of his campaign, to enforce tough, punitive measures on immigrants found in the U.S. without proper documentation, the vast majority of whom hail from Latin America. While such rhetoric has been widely praised by Trump’s supporters as a sign of the new administration “putting Americans first,” his detractors have decried the idea as one that not only bolsters an unjust and outdated immigration policy but also creates an atmosphere of intimidation and terror for undocumented immigrants and their families, many of whom have already laid down roots in the United States.

One of the most prominent efforts to shield such vulnerable populations from prosecution and deportation is the “Sanctuary Campus” movement, which aims to turn various American universities into “secure” institutions in which undocumented immigrants can live and study without any fear of legal harassment. In support of this nation-wide movement, which has already caught on at several colleges in the U.S., the Radical Student Union (RSU) at CWRU drafted a petition a week before Thanksgiving, calling for President Barbara R. Snyder to also make CWRU a sanctuary campus.

The petition, which also demands that university administrators “actively refuse to comply with immigration authorities regarding raids or deportations” on campus and that they provide free legal service to undocumented students, has been signed by a variety of campus organizations, as well as by many students and faculty.

“Every day, undocumented workers live in fear of arrest, deportation and indefinite detention without … rights,” said Evan Adams, secretary of the RSU. “Undocumented workers [perform] many of the most important and least pleasant jobs in the U.S. Without any of the worker protections enjoyed by citizens, they are blatantly preyed upon by bosses … who know they have no alternative.”

Other voices in support of the petition focused more on the fact that undocumented students at CWRU are still students, entitled to the same rights and protections enjoyed by their peers with documentation.

“It is important to help ensure a safe learning environment for everyone on our campus,” said Cheryl Toman, director of the Ethnic Studies Program at CWRU. “And by extension, our community’s families should feel safe here too.”

This argument, which emphasizes the universal safeguarding of student dignity in order to support making CWRU a sanctuary campus, resonates widely with many of the other individuals who have signed the petition.

According to Timothy Nicholas, vice president of Public Relations in the Undergraduate Student Government (USG), supporting all CWRU students is the most important concern of his organization.

“The USG believes that … advocating for all students is at the very center of what we do,” he said. “In an effort to support not just the Latinx community … but also those other undocumented individuals in our campus community, we support the requests of the petition for the University to stand by those members of our community that may soon face the threat of deportation.”

Some university administrators have also provided muted support for the initiative.

As Lou Stark, vice president for Student Affairs, put it, “The safety and well-being of members of our community are our highest priority.… The university provides multiple avenues of support for students, regardless of their home state or country.”

Other proponents of the petition, however, are more emphatic about reasons for their support. Timothy Black, faculty associate of the Social Justice Institute and acting director for fall 2016, framed his institution’s advocacy of the Sanctuary Campus movement as a reflection of nationwide progress and equality.

“The Social Justice Institute emphatically believes that one election must not turn back the progress that has been made to be a more inclusive society,” said Black. “It is part of SJI’s mission to work toward an equitable society that promotes human dignity.… Therefore, [we] stand with … other universities in supporting sanctuary for any undocumented individuals who are part of our campus community.”

While most individuals and organizations at CWRU seem to support this petition, there are also many staunch opponents of illegal immigration in the United States. Common arguments raised by these people argue that the presence of undocumented immigrants in the United States represents a violation of American law, and that illegal immigration takes jobs away from qualified American citizens, and harms the U.S. economy.

“Even under the highly debatable assumption that undocumented immigration is harmful, addressing its symptoms by cracking down with legal punishment rather than investigating its causes is a backwards way to approach it,” he said. “[You have to] investigate and address its causes, and the cause of mass [Latinx] immigration is over a century of American meddling in Latin America that has started countless wars and anti-democratic coups.”

Other opponents of the petition see problems with the way it is constructed, feeling that it is ambiguously-worded and represents an overreaching of CWRU’s authority.

“If you are looking to protect undocumented immigrants, it is better for the state to help them get legal status,” said two international engineering and management graduate students at the Weatherhead School of Management, who asked to remain unnamed.

“[To solve the issue of illegal immigration], the state has to either change the rules or help them become legal,” they continued. “[We] don’t understand exactly what is meant when people say ‘protect [illegal immigrants].’ Are you going to help them get legal status? Also, [we] don’t think it’s up to college authorities to make this decision … It’s a national issue. I don’t think CWRU can have anything to do with [legally] helping undocumented immigrants.”

Amidst all the fierce disagreement, Amalia Gitosuputro, president of the Muslim Student Association (MSA) and one of the individual signees of the petition, struck a more conciliatory tone.

“I think what gets lost with such a heated debate is that things start to get lumped together,” she said. “Yes, undocumented immigrants in the U.S. [are technically illegal], but these are people. People who have found a new way of life here, people who have made families and people who have planted new roots.”

“[If we] end up having stricter immigration laws in the future, that is a different argument,” said Gitosuputro of the possibility of a new, stricter immigration policy. “But we are here now, we are together now, and [undocumented students] should feel as safe as any other student on campus. Documented or not, they are here and we support them in every way.”