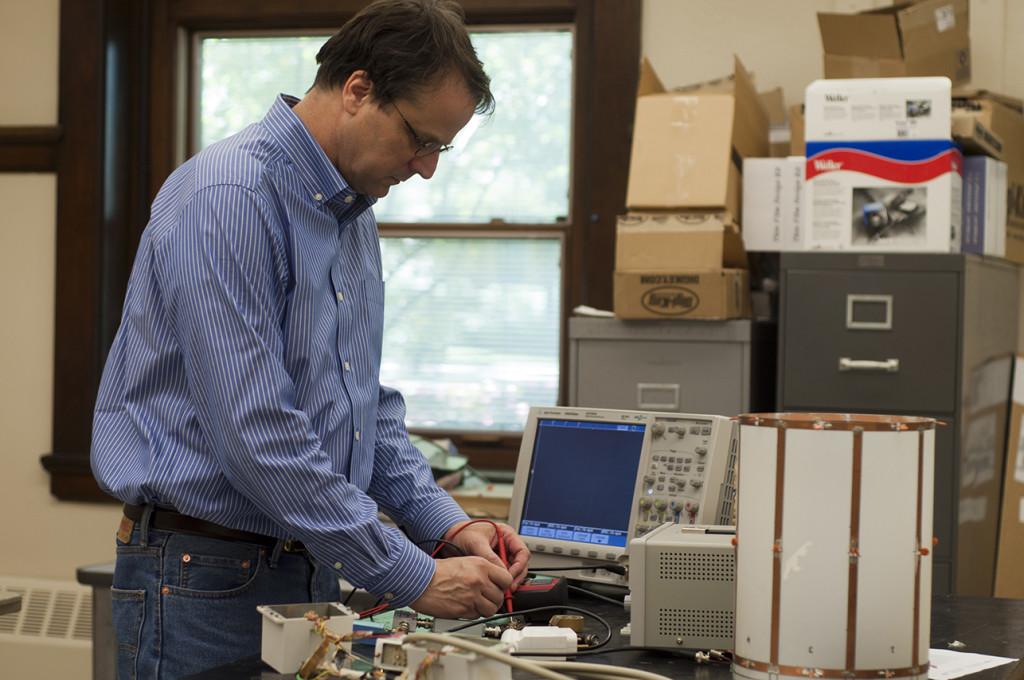 Associate Professor of Physics Michael Martens works in his medical imaging physics lab. He is looking to develop cheaper MRI technology, primarily by designing a scanner that uses less liquid hydrogen, a costly substance) as a coolant.

When it comes to magnetic resonance imaging (MRI) scanners, the average physicist usually has nothing to do with it — MRI technology is typically associated with those in the medical field. However, despite common perceptions, Dr. Michael Martens, associate professor of physics, recently received a grant from the National Science Foundation (NSF) for $596,365 in order to work with these very machines.

He will be leading a project that hopes to design a superior scanner, while offsetting a potential rise in price of the device. After attending Case Western Reserve University as both an undergraduate and graduate student, Martens is back home to work with this innovative medical technology.

He first plans to deal with the cooling agent, liquid helium, which is one of the more expensive parts of an MRI scanner. A typical scanner currently uses two to three thousand liters of the coolant, and with both price and demand steadily increasing, a coolant shortage is projected in about the next five years. In order to circumvent the issue, Martens is experimenting with making the keystone electromagnet in the machine out of a new material, magnesium diboride.

“[The current material] is cooled down to about four kelvins, and that’s why you need so much liquid helium. For the magnesium diboride, the material becomes superconducting at 39 kelvins,” said Martens.

With this, a smaller amount of the coolant would be needed, counteracting the projected rise in liquid helium costs.

In addition to the new material, Martens is planning to further stabilize the cost by figuring out a way for the machine to use a smaller magnetic field, further reducing the amount of coolant needed.

However, he noted, “it wouldn’t give you quite as good of an image.”

Marten’s college major and doctorate is in physics, with his thesis on magnetic resonance imaging. With this background in mind, it’s no surprise that Martens has decided to innovate the scanner’s makeup. He plans to alter the Radio Frequency (RF) coils in the field. This would allow for an enhanced quality image in a lower magnetic field. In MRI scanners, RF coils charge up hydrogen atoms, and the image produced is made from how the electromagnet interacts with the atoms as they discharge. With this in mind, the group’s plans call for reducing the magnetic field from 3.0 tesla to 1.5 tesla.

Martens won’t be building the scanner himself, however. He noted, “What we hope to get to is a point where the design is complete enough where someone could build it.”

The project will cooperate with the Columbus-based company, Hypertech. The partnership was created under a group called the Ohio Platform for Tomorrow’s Industrial Medical Imaging Systems and Equipment (OPTIMISE), which partners Case Western Reserve University projects along with technology based companies such as Siemens, Toshiba and Samsung.

“It’s an informal group,” as Martens describes it.

However, the interaction provides footing for what could eventually require a large amount of venture capital.

Marten’s grant is for two years, and while that may seem like a lot of time, a lot of work must be done on the path to reaching his goal. Martens, however, is optimistic.