Pinning down the opposition 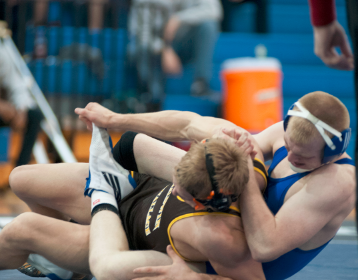 The Spartans wrestling team looks to improve under Head Coach Danny Song after he led a very young team in his first year at the helm.

It’s not too often an athlete in their first season wins a conference title, but that’s exactly what happened on the Spartans’ wrestling team last season. Then first-year student Brian McNamara won the University Athletic Association (UAA) heavyweight title for Case Western Reserve University. McNamara and 10 other wrestlers return to a team that is looking to build on the progress it made under Head Coach Danny Song, who is now in his second year of coaching the team.

McNamara also won UAA Rookie of the Year honors for the 2015-2016 season. He went 5-4 in an unusually short season. McNamara’s season was cut short, as he is a member of the football team and cannot join the wrestling team until football season is over. Look out for that to be a struggle for CWRU again this season.

Overall, the Spartans did very well at the end of last season, especially considering they had a first-year head coach and a majority of team was underclassmen. They finished third in the UAA and 17th at the NCAA Division III Mideast Regional Championships. CWRU did have a rough majority of the season, going only 1-7 in dual matches.

Second-year student Gavin Dersh-Fisher is also another key returner for the Spartans. Competing in the 197-lb. weight class last season, Dersh-Fisher won a match at the Regional Championships. He finished the year with a 6-13 record and was named the “Most Improved” wrestler on the team.

Third-year student Nick Tommas is the third returning CWRU wrestler to win a match at the Regional Championships last season. Tommas is looking to continue his success in the 165-lb. weight class.

Team captain Matt Moy is one of two fourth-year students wrestling for the Spartans this season. Moy, one of the lightest members on the team, competes in the 125-lb. weight class. He is joined by Nate Lewis, a heavyweight, who missed last season, but has a 12-12 career record.

Song welcomes nine new student-athletes to the program, including eight first-year students. Isaac Collier, who wrestles in the 149-lb. class, is among the new members. While other members of the team competed in an intrasquad scrimmage, Collier wrestled against Cobey Fehr from Notre Dame College in the National Wrestling Coaches’ Association All-Star Classic held at Cleveland State University.

Song told the Athletics Department that competing at the Classic “is a once in a lifetime opportunity” and “a tremendous platform to compete and represent CWRU.”

The Spartans open the season by hosting the Ohio Intercollegiate Open on Sunday, Nov. 13. It probably is your best chance to see the Spartan wrestlers in action, as it is one of only three competitions to take place at the Veale Convocation, Recreation and Athletic Center this season. One of the two other matches takes place before classes resume for the spring semester. Be sure to trek over to Veale to cheer on fellow students.