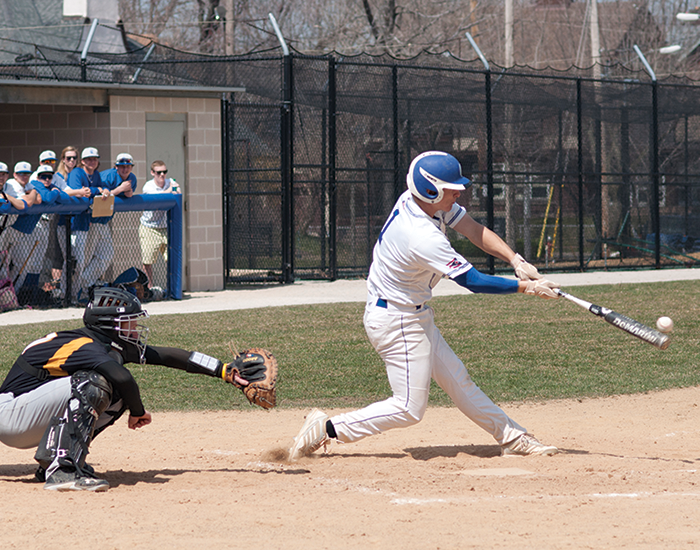 Senior Matt Keen launches one of his team-leading 27 hits. Keen leads the team with 11 doubles and 25 RBIs.

Over the weekend, the Case Western Reserve University Spartans made a road trip to Pittsford, NY to take on St. John Fisher College on Saturday and Sunday afternoon at Dugan Yard. Senior pitcher Jarrett Gish recorded his first career shutout on the mound and improved to a perfect 4-0 this spring as the Spartans earned a 3-0 victory during the first of a three-game weekend series. On Sunday, senior first baseman Brett Ossola went a combined 6-for-8 at the plate, and senior pitcher Jamie Hora tied the program’s career wins record as Case split the doubleheader. With the split, the Spartans move to 17-8 overall heading into a season-long home stand. The Cardinals sit at 15-9.

In game one, Gish turned in his strongest outing of the season, allowing just five hits and only three Cardinal runners to advance to second base in nine innings of work. The lefty struck out five, surrendered only one walk, and lowered his earned run average to 1.92 in a team-best 51.2 innings pitched. The complete game was also Gish’s third this spring and sixth of his career. On offense, Case scored early and put a run up right out of the gates in the top of the first. Sophomore centerfielder William Meador led off the game with a single to center, moved to second via a walk drawn by senior shortstop Matt Keen, advanced to third on a groundout, and came around to score on a RBI single through the left side off the bat of senior second baseman Paul Pakan.

The Cardinals threatened Gish’s shutout bid in the bottom of the eighth, but the left-hander worked around a leadoff walk and a sacrifice bunt with a fly out and a swinging strikeout. The Spartans put on a pair of insurance runs in the top of the ninth. Pakan started the inning with a leadoff single to center, advanced to second thanks to a sacrifice bunt, and moved to third on a single to center by sophomore catcher Robert Winemiller. Pakan would then score Case’s second run on a wild pitch, and Winemiller scored the final tally on a single to center off the bat of junior third baseman Andrew Frey.

In the second game of the series, the Spartans picked up a run in the second as third baseman Frey singled and came around when shortstop Keen drew a bases-loaded walk. However, the Spartans left a combined five runners on base in the first two frames, and the Cardinals responded with three runs in the bottom of the second on a Matt Creenan RBI double and back-to-back RBI singles from Cody Wiktorski and Ben Bostick. The hosts got off to their first lead of the series in the fifth, but Spartan junior left-hander Ray Kelly came out of the bullpen and induced a fly out to strand runners at second and third. The Spartans attempted to cut into the Cardinal lead in the sixth and seventh but left two runners on in each inning as the game ended 3-1 in favor of the hosts. Combined, the visitors stranded 11 runners in the game. Case finished with six hits and four walks, but St. John Fisher All-American pitcher Justin D’Amato (5-0) was able to dance out of trouble on several occasions in his six innings. Shawn Corrigan recorded the final two outs for his first save.

In game two, the Cardinals loaded the bases with no outs in the second but were only able to put one run across as lefty starter Hora sandwiched a strikeout with two fly outs. The Spartans then tied the score in the third when sophomore centerfielder Meador reached on a fielder’s choice to plate Frey. An inning later, Ossola gave his team its first lead of the game with an RBI single that drove home second baseman Paul Pakan. Pakan set the score up with a single and a stolen base. In the fifth, Meador delivered his second run with a single that drove home sophomore leftfielder Kerrigan Cain. St. John Fisher rallied and tied the score in the bottom of the inning with a two-run single by Brad Rush. The Spartans regained the lead and put the game away with a five-run sixth-inning. Frey drove home the first run with a single before catcher Winemiller scored on a balk. Meador picked up another RBI single two batters later, and Keen put the icing on the cake with a two-out, two-run single. Freshman Connor Tagg would allow one more run in the bottom of the sixth on a Ben Bostick RBI single, but he got out of the inning with a groundout to set up sophomore right-hander Daniel Sondag for the final inning.

The Spartans will host a back-to-back doubleheader with DePauw University coming to town on Saturday and Sunday, April 20-21. The first pitch on Saturday will be at 1 p.m. and on Sunday the game will be at noon.