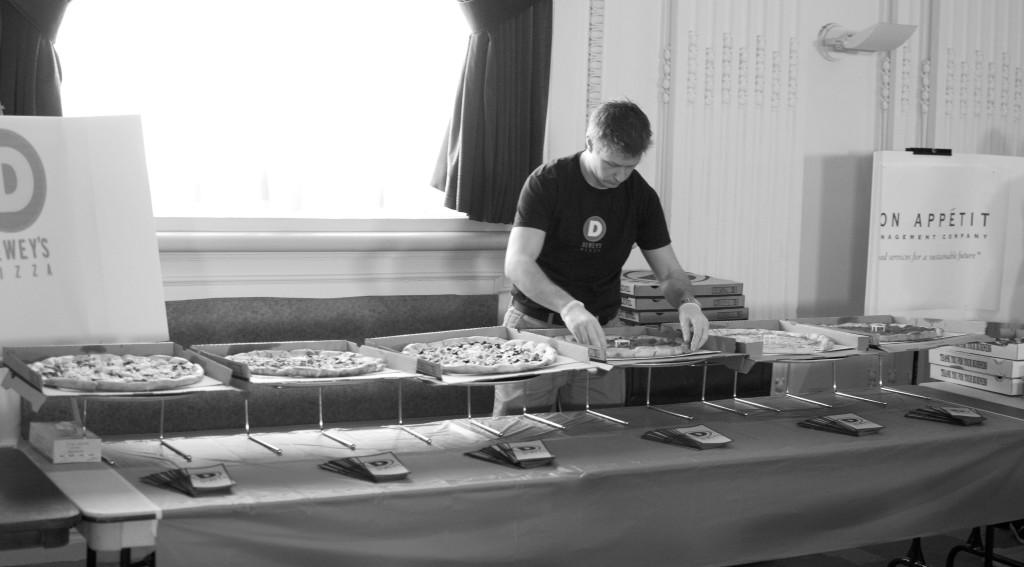 When I’m talking about the line at the 4th annual Pizzalympics, I’m talking about a line, twenty minutes before the opening of the event on a chilly Friday at 12:30, which extended down the flights of stairs and nearly out the door. This year the event was opened to everyone at Case Western Reserve –literally everyone: undergraduate students, graduate students, law school, medical school, faculty, and staff alike- and to say that it was met by outstanding attendance was almost an understatement.

Pizzalympics was created in the USG finance committee in the 2007-2008 school year. Keith Lupton explained that, “We wanted to come up with a list of all of the pizza vendors that deliver to Case’s campus called the ‘Pizza Directory.’ The Pizzalympics was an initiative that we created as a way to determine the order in which the pizza vendors would be listed on the directory.” Lupton also commented, “We also thought it would be a great way to please the student body with free pizza.” The first event was a success and has since been put on annually.

This year, the goal was to run out of pizza completely, compared to previous years where they had leftover pizza from the vendors. And at 1:18, less than an hour after the start of the event, the attendees had helped them do just that.

Lupton commented, “The expectant turnout for this year was about 600, and we ended getting about 1000 people. Due to such a high turnout, we ran out of napkins, seating, and pizza earlier than we had anticipated.”

Amy Brown, a graduate student that attended the event, commented that the event exceeded her expectations. “It was really fun to see how they had improved the event from previous years. They were very organized and good at recruiting the student body to come to the event. However, less of a line and more pizza ready and waiting from the start could have improved the event.”

From previous years, the biggest change had been in the judging. While last year only undergraduates were pooled for the voting, this year USG attempted to get an accurate representation of the entire school. Instead of only having ten judges total, there are 32 judges that made 4 panels with 8 judges each. Of the 32, ten undergraduate students were chosen by random selection from a pool of interested representatives from various student organizations. Each panel judged a different category of pizza (vegetarian, meat, specialty, and cheese). The judges were asked to rate each pizza for its appearance and overall taste on a scale of ten without knowing which pizza was which, to reduce any potential bias. A weighted average was then computed between the judges, and the rankings were determined.

Andrew Leveto was one of the ten undergraduates that served as a judge, nominated by the Case Croquet Club. He commented that, “The USG members did a great job of serving all the judges and making sure we always had pizza and water in front of us. The event as a whole was very well organized and well attended. There was a line down the stairs in Thwing for almost two hours.”

“We had 325 boxes of pizza this year, compared to the 225 boxes of pizza last year,” Lupton said. Leveto commented on the boxes, saying that, “It was impressive to see the mountain of empty pizza boxes by the end of the event.”

For next year, more improvements are going to be made. USG plans to bring in a more diverse representation for the official judging. For the pizza itself, they want to have the vendors cut the pizza into smaller slices, so that a greater number of people can taste each vendor and that there will be less waste. Lupton commented that, “we hope to have additional seating for the event in Meeting Rooms A, B, and C, in addition to the 1914 Lounge.”

Leveto pointed out that, “My least favorite part of the event was that I couldn’t eat all the pizza.” While the turnout seemed to take USG by surprise, the event could definitely be seen as a success. Brown commented as well that, “There were lots of people enjoying the best food out there — pizza.”