Play-In Tournament adds excitement to set up the NBA Playoffs 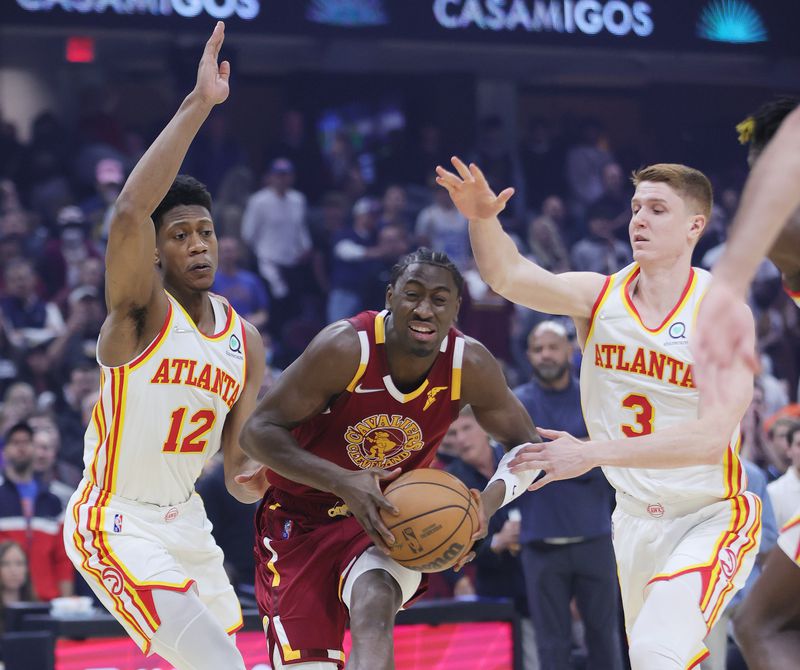 The Atlanta Hawks beat the Cleveland Cavaliers in the second game of the Play-Ins to clinch the eighth seed and face the No. 1 Miami Heat in the first round.

With the NBA’s regular season ending April 10, the No. 7-10 seeds of each conference competed for the final two playoff spots in the Play-In Tournament for the second straight year. The No. 7 and No. 8 seeds compete for the seventh seed to face while the loser of this game will face the winner of the No. 9 seed vs. the No. 10 seed in a final battle for the eighth seed.

This began on April 12 when No. 7 seed Brooklyn Nets hosted No. 8 seed Cleveland Cavaliers. Brooklyn’s dynamic duo of Kevin Durant and Kyrie Irving combined with Cleveland’s Jarrett Allen absence due to a fractured finger made the Nets heavy favorites to win this game.

The game kicked off in the Barclays Center with the Nets establishing a commanding 20-point lead at the end of the first quarter, 40-20. Irving showcased his stellar scoring abilities with a contested mid-range jumper over Cavaliers guard Caris Levert at the buzzer putting the Nets up 57-43 to end the first half. Irving went on to score on his first 12 shots before missing his next three to finish the game with 34 points and 12 assists. Durant contributed another 25 points and 11 assists to go along with a near triple-double by Bruce Brown, who put up 18 points, 9 rebounds and 8 assists. Cavs guard Darius Garland’s 34 points were not enough to get by Brooklyn, as they lost 115-108.

Brooklyn went on to face the Boston Celtics in the first round, who tout the NBA’s best defensive rating led by Defensive Player of the Year Marcus Smart. Smart is the first guard since Gary Payton in 1996 to win the award. Meanwhile, Cleveland would have one more chance to secure their spot in the playoffs.

The fight for the seventh seed in the Western Conference took place in Los Angeles where the Los Angeles Clippers hosted the Minnesota Timberwolves. The first half was a tight battle that ended in favor of the Timberwolves 53-51.

The Clippers pulled ahead in the third quarter, but clutch performances by the Wolves’ backcourt of Anthony Edwards and DeAngelo Russell led the team to their second playoff appearance since 2005. Edwards finished the game with 30 points and 5 3-pointers, while Russell finished with 29 points and 6 assists. Paul George’s 34 points, 7 rebounds, 5 assists and 3 steals was not enough, as the Clippers fell 104-109.

Following the fourth-quarter buzzer, an emotional Patrick Beverly hopped onto the scorer’s table to celebrate this victory over his former team, who had traded him the previous summer. In a post-game interview, Beverly stated “Man, I wanted this one so bad. This is just the icing on the cake, the cherry on top… I told you we were going to the playoffs, you all looked at me like I was crazy.”

Minnesota now faces the Memphis Grizzlies in the first round, while the Clippers will have to prove themselves in one more game without George, who was sidelined due to COVID-19 protocols.

The No. 9 and No. 10 seeds of each conference battled for a chance to make the playoffs as the eighth seed on April 13. This began in Atlanta, where Trae Young and the Hawks hosted Lamelo Ball and the Charlotte Hornets. From the opening whistle, Atlanta established a convincing lead, finishing the first quarter with a nine-point lead. Though Young struggled initially, he still managed to finish with 24 points and 11 assists. A third-quarter surge led by Deandre Hunter contributed to Atlanta’s blowout victory over Charlotte with a score of 132-103. Lamelo Ball and his backcourt teammate Terry Rozier finished with 26 and 21 points respectively, but Atlanta’s well-rounded roster, and Young’s playmaking, pushed the Hawks over the edge.

Atlanta’s victory eliminated the Hornets from playoff contention and pushed them one step closer to facing the first seeded Miami Heat in the first round. However, the Cavaliers stood in their way.

In the Western Conference, the San Antonio Spurs competed against the New Orleans Pelicans. The Spurs were no match for the Pelicans offense led by CJ McCollum, Brandon Ingram and Jonas Valencuinas. After three quarters, the Pelicans established a 17-point lead, which was insurmountable for San Antonio in the fourth.

All-Star Guard and Most Improved Player of the Year finalist Dejounte Murray of the Spurs had a disappointing performance, finishing with 16 points on 5-19 shooting. McCollum led the Pelicans with an all-around performance recording 32 points, 6 rebounds and 7 assists while Brandon Ingram added 27 points.

With New Orleans ending San Antonio’s season early, they would have one more chance to make the playoffs against the Clippers.

The Play-In finale took place on April 15, where the No. 8 seeds of each conference were determined. The first game occurred in Rocket Mortgage Fieldhouse, where the Cleveland Cavaliers hosted the Atlanta Hawks. With Jarrett Allen returning and Hawks’ Clint Capela leaving the game early with a knee injury, things seemed to be going Cleveland’s way.

The game kicked off with back-to-back threes by Cleveland, sending the fans into a cheering frenzy that rumbled across the arena. The Cavs’ early energy resulted in a 10-point first-half lead with a score of 61-51. The second half, however, was disastrous. The Hawks’ stubborn defense combined with Cleveland’s ice-cold offense limited the Cavs to just 40 additional points.

Early “F*** Trae Young” chants fueled a fire in Young, as he went on to score 32 of his 38 points in the second half. Most Improved Player Darius Garland struggled from the field, scoring 21 points on 9-27 shooting. Lauri Markkanen posted 26 points on 6-12 from 3-point land, but it was not enough. The Hawks won 107-101 and Young commented on Cavs fans leaving before the fourth-quarter buzzer, saying “Where’d everybody go?”

Atlanta, the 2021 Eastern Conference runners-up, are now facing No. 1 seed Miami Heat in the first round while the Cleveland Cavaliers end their overachieving season.

The play-in tournament ended in Los Angeles where the Clippers hosted the Pelicans. This was a tough battle for the Clippers, who had been missing their franchise player Kawhi Leonard for the whole season and George, who was still within the league’s COVID-19 protocols.

New Orleans rolled through the Clippers in the first half with their lead growing to as much as 16 points, finishing with a score of 56-46. Despite this, the Clippers answered with a run of their own, establishing a 13-point lead over the Pelicans in the fourth quarter.

New Orleans overcame this deficit, reclaiming the lead with four-and-a-half minutes left in regulation. Ingram led the game with 30 points to go with 6 rebounds and 6 assists. The Clippers’ Reggie Jackson and Marcus Morris Sr. each finished with 27 points but fell to New Orleans 105-101.

New Orleans Coach Willie Green commented on the back-and-forth battle, “It was an emotional game, a ton of highs and lows. But for us, our mentality is we’re going to fight.”

New Orleans currently faces the Phoenix Suns, who own the NBA’s best record led by veteran guards Chris Paul and Devin Booker. Though the Clippers’ season came to an end early, they should be back in the discussion for finals contention when their star duo of Kawhi and George returns.

With the first round of the playoffs underway, expect several long series and late-game heroics from the NBA’s greatest stars.